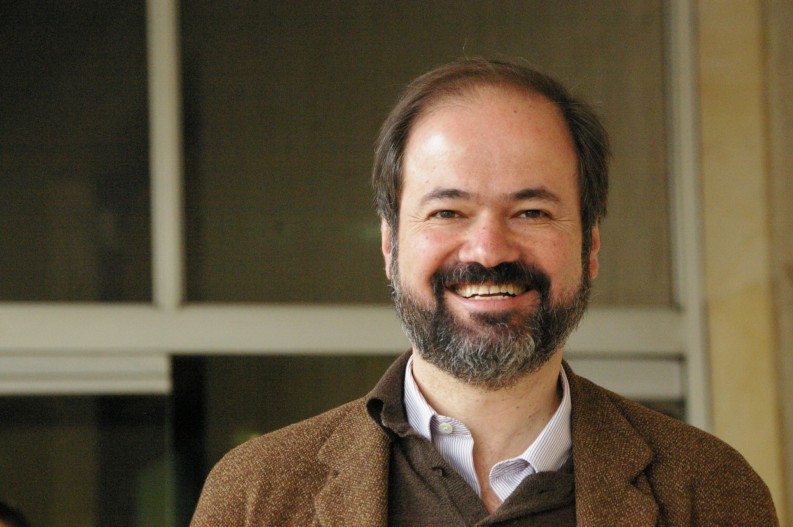 A panel at the London Book Fair discussed the path a collection of Mexican author Juan Villoro’s essays took to be translated from Spanish to English.

Following the journey of a book from another language into English was the subject of a lively encounter at the LBF last week around Mexican author Juan Villoro’s collection of essays, to be published by Restless Books in spring 2016.

The Literary Translation Centre organizers had hoped to plan one such event a day, but Villoro’s book became the case study. Villoro is one of Mexico’s most prolific authors, with numerous novels, short story collections, essays, children’s books and plays under his belt, yet he will be published in English for the first time this spring. Besides Restless Books, George Braziller will publish his collection of short stories entitled The Guilty in June.

Villoro, his translator, Thomas Bunstead and Joshua Ellison, executive editor of Restless Books, all together for the first time, discussed the book’s journey with author, translator and publisher, Lawrence Schimel in an edited conversation:

Schimel: How did you find the book and how does Restless usually go about finding books to translate?

Ellison: My partner [Ilan Stavans, originally from Mexico] at Restless has known Villoro for a long time; we already admired him. We have recently been developing non-fiction in translation, which is not easy. It has to survive a few years of lag between the original language and the translation, it’s a bit of a different challenge and it has to be a topic that we think we can present to an English language audience.

Bunstead: I happened to see through a mutual publishing friend on Facebook something about translating football essays and I inquired about it.

Ellison: We found it in the publisher’s catalogue. I’m not sure there is a typical route. Often it’s an author we’re already looking at. Other Restless books have come to us via an agent or a publisher, and a translator can be a major source of scouting. We have a Cuban section in our catalogue, which was serendipitous — one writer opened the door to many others. There are translators who tell us about books besides the ones they are working on. Translators are ambassadors to the host language. I always ask translators what is the one book you’d like to translate.

Bunstead [also a sports and football fan]: Villoro is an interesting person to be writing about football, you don’t see this kind of author in the UK writing about it. There is a certain literacy that is required for the football idiom, but I’m also a literary translator. This writing is very literary. It’s the psychoanalysis of what it is to be a fan. Restless wanted material that had contemporary resonance; these are collected football essays over the years.

Ellison: This [collection] could end up with a bigger market in the UK since football is more popular here but for the moment Thomas [Bunstead] is translating for a US audience. It’s very literary. There’s a rhetorical bounce. God is Round is the working title.

Villoro: I’m very fond of translators. I am a translator myself. It is punishing sometimes to render the soul of another writer in your own language. To a certain extent a translator is an author himself, perhaps a shy one but an author nonetheless. The idea of publishing a book in the US about soccer is quite astonishing. The soccer fan in Mexico has a fantasy that they can defeat the US in soccer; it is the only field we can beat them in. When we play in the US, in Chicago, or Detroit, the fans are all Mexican. I’m very happy to have a British translator because the football culture here is so strong.

We chose essays on more international figures. There are some stories that can stay as they are. I wrote about the drama of the German goalkeeper who committed suicide. It’s a moving and depressing and dramatic story. There are other stories that needed an update. So we chose stories that were more contemporary as well as ones that could travel and could ring a bell for the international reader.

[When you write] I think it’s dangerous for a writer to think about a possible translation from the beginning.

Schimel: What happens once the book is published?

Ellion: This book is an opportunity to reach a very different type of audience than with most translated books. Juan [Villoro] speaks English so he can tour and can actively participate in the process because his English is so good. When the author participates it can give us broader possibilities.

Some translators are great public advocates post publication. They can often be important connecting us with press, readers, and institutions. Their experience is really valuable to us.