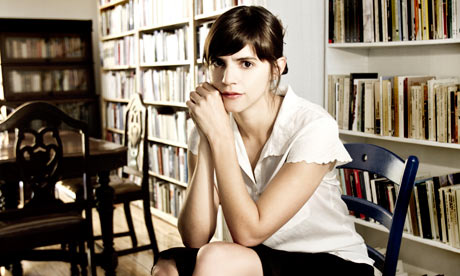 Valeria Luiselli has had several hits in English translation by Coffee House Press in the United States.

Mexico’s Valeria Luiselli, the London Book Fair’s Author of the Day,  aversion to embodying any singular cultural or literary tradition.

Today, Wednesday, April 15th, Valeria Luiselli is the Market Focus Author of the Day at the London Book Fair. Luiselli is one of twenty Mexican authors included in México20, the joint project of the Hay Festival, the British Council and Conaculta, aimed at promoting new voices in Mexican literature during the year of Mexico at the London Book Fair and the Year of the UK at the Guadalajara Book Fair.

In many ways Luiselli is the perfect writer to take center stage in this cross-cultural exchange having been dually formed by the Anglo and Latin American literary traditions. Luiselli was born in Mexico City in 1983. Her father was an ambassador so the family moved around quite a bit. When she was 11, her family moved to South Africa, where Luiselli studied in a British school for four years. Though she was raised speaking Spanish, her education was mainly in English. It wasn’t until spending her final years of high school at an international school in India that she, together with a cohort of other young Latin American students, actually began reading Spanish-language writers. “It was a way to speak our own language while abroad and to have a sense of community,” she says. Luiselli returned to Mexico City to pursue a degree in Philosophy at the UNAM. She began writing professionally in her early 20s and credits fellow Mexican writer Laia Jufresa for allowing her to see that it was possible to pursue writing as a dedicated profession. Around that time, she began writing Papeles falsos (later published in English as Sidewalks) and publishing critical essays in Mexican journals. Her work has since appeared in The New York Times, The New Yorker, Granta, and McSweeney’s. She is currently completing a PhD in comparative literature at Columbia University in New York.

Her novel, Faces in the Crowd, and book of non-fiction essays, Sidewalks, were both published by Granta in the UK and later published simultaneously in the U.S. by Coffee House Press. Both books were quick to gain critical acclaim and Faces in the Crowd is currently a finalist for the LA Times Book Award for first fiction. This past year, Luiselli was named one of the National Book Foundation’s “5 Under 35.”

Urban environments give rise to mediations on memory, timelessness, and the creative potential of hollow spaces or relingos as she calls them — absences in the heart of the city — in both of Luiselli’s books. Faces in the Crowd interweaves multiple narrative voices across time and space: a young mother in Mexico City, a translator living in Harlem, and the Mexican poet Gilberto Owen. Over the course of the novel, it becomes more difficult to distinguish one voice or time period from another. The more you try to fix something, the more it evades you — language, especially, Luiselli seems to be saying. “Perhaps learning to speak is realizing, little by little, that we can say nothing about anything,” she writes in Sidewalks.

Her latest novel The Story of My Teeth just came out in the UK and will be published in the U.S. this fall. It arose from a project commissioned by a contemporary art gallery in Mexico City. The gallery’s exhibitions are funded by proceeds from a juice factory next door. Luiselli decided to bring these two worlds together more explicitly through written pieces, produced in installments for the factory workers and further elaborated based on their weekly responses to the pieces. She wrote under a masculine pseudonym and distributed her writings in the form of chapbooks.

Equally adept in both Spanish and English, Luiselli is unsure in what language she’ll write her next novel and says ultimately the material will dictate which to use. She admits that the process of having her Spanish work translated into English has largely influenced her English writing voice and she works very closely with her translator Christina MacSweeney on revising and sometimes even re-writing her work as it is being translated.

When asked whether or not she feels more connected to Anglo or Mexican literary communities, Luiselli says: “I think my work has always been in conversation with the writers I choose to be in dialogue with for that particular work.” She insists she has always been disloyal to traditions and cannot identify with any one national literature, a characteristic she doubts is unique to her: “I think Latin American literature has always seen itself as global and has always been written abroad.”

Given her upbringing as an ambassador’s child, made to dress up as a traditional china poblana and put on display while singing the Mexican national anthem, Luiselli has an aversion to embodying any singular tradition. “I do not feel and have never felt and hope to never feel that I represent anything except myself,” she says, “I don’t think that my writing represents a national literature and on the contrary, I’ve always felt free from those roles.” She is particularly wary of nationalist obligations given the complicated relationship Mexican writers have historically had with the state, with whom they had to comply in order to receive funding for their work.

Nevertheless, she is not unaware of the responsibility and privilege of being a Mexican writer living abroad and is willing to do whatever she can to help her linguistic community gain more exposure in the U.S. She expresses an affinity and deep respect for her fellow writers on the México20 list and in response to the announcement that Mexico would be the guest country at the London Book Fair this year, Luiselli wrote in the UK’s BookBrunch:

“I am confident that the more Mexican literature is read, the less clear it will be for everyone what Mexican literature really is. This is a good thing; a ‘happy ending’ of sorts, as anything that can be pigeonholed is not worth understanding.”

Who better to make the case for the value in evading categorization than Luiselli herself.