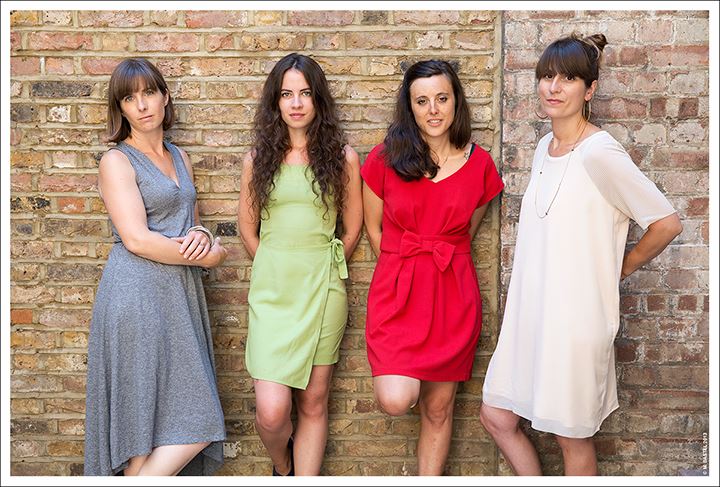 The founders of the UK’s Literary Platform reflect on the changes they’ve seen in digital publishing over the 5 years since launching their consultancy. Joanna Ellis and Sophie Rochester of The Literary Platform

Last month it was listed on the Fortuna 50 list of the UK’s fastest-growing women-led small businesses, and featured in the Guardian Professional/h.Club 100 list of “most innovative and influential” in the creative industries.

Here its two partners Sophie Rochester and Joanna Ellis reflect on the highs and lows of those five years, and consider what major changes they’ve seen in digital publishing over that time.

Sophie Rochester: “I can remember working at digital agency AllofUs in 2009, drawing a Venn diagram and working out that I’d like to be working at the heart of books and technology. This was followed by an Internet trawl and out of that came a list of of four people to speak to – they were Peter Collingridge (Enhanced Editions), Chris Meade (if:Book), James Bridle (BookTwo) and Bob Stein (Future of the Book). It’s interesting in fact to think about how all their careers have shifted over the five years – Peter Collingridge now running product at Safari in California, Chris Meade doing a PhD in digital publishing at Bath Spa, James Bridle creating thought-provoking art and Bob Stein still pushing digital publishing’s boundaries with projects like SocialBook.

At the time they stood out as pioneers – though of course I quickly discovered The Literary Platform was very late to the party – e.g. Electric Literature was founded in 2006, and the real digital writing pioneers such as Judy Malloy and Michael Joyce were experimenting in the 80s. I got in touch with the UK based names on the list, and when we launched the site Bob Stein got in touch and we met in London. Stein felt the site could become a sales channel for book apps (it never did), but it was great to hear from him about those early days and he donated an amazing piece of audio from Douglas Adams to the site which we later used in our animation competition. Thinking back now, the motivation at that time was to try and make a move back into UK publishing at some point, but as interest in the website grew the joke of a ‘small window’ consultancy gathered momentum.”

Joanna Ellis: “2010 was a really heady time at Faber, and for publishing generally. After a few false dawns the launch of Kindle, supported by Amazon’s end to end infrastructure, meant ebooks finally took off in the UK and we had a new mass market format on our hands; social media had established itself as a daily feature in our lives and presented publishers with the opportunity to identify, forge relationships with and understand readers in ways that weren’t previously possible; and smartphones and the newly launched iPad prompted were prompting publishers to re-evaluate what is a “book” and “reading.”

Of course writers and artists have always experimented — and pioneered — new forms, but with avenues to market opening up, publishers got in on the act too. It was a playful time, publishing had been pretty insular, happy doing its own thing in a corner, convergence meant that publishers were no longer just competing amongst themselves, they had to look up. I remember having a lot of creative conversations with people from other sectors – I remember you coming in with a whole host of ideas! — the horizon widened and it was really refreshing and invigorating.

I think what I’ve found most interesting over the last five years or so is how the narrative has shifted from an either/or scenario to a more nuanced and/and scenario. Digital hasn’t replaced print or face-to-face, in fact the latter have acquired a new value in light of digital. The challenge for publishers is really how they surf continuous change, particularly with regards to people’s behaviors and expectations.”

SR: “That’s funny as I remember (a bit painfully) going into publishers with ideas at that time. I pitched an interactive Alice in Wonderland to Random House, a Wolf Hall interactive timeline to Harper Collins and a Shockheaded Peter app project to Faber. All ideas with absolutely no suggestions on how these projects would be funded, created or find audiences. But that almost captures that time I think – the excitement surrounding the launch of the iPad, the endless possibilities for “enhanced books.” Of course, everyone was thinking along the same lines – there was never a shortage of ideas! It was just sometimes not clear whether these were commercial ventures, marketing ventures, experiments or purely artistic endeavors.

It’s been interesting too to watch how patterns in digital publishing differ globally. In 2010 people often talked about UK publishing following patterns in the US, with Europe following the UK in turn. But we’ve seen how countries like China, Nigeria, Brazil and so many others have thriving digital publishing industries that look very different to ours. Octavio Kulesz’ research in this area is so refreshing. Even within Europe attitudes to how to approach digital publishing (for example France’s recent ruling on Kindle Unlimited) contrast greatly — it makes it a perpetually interesting area to work in. “

JE: “Yes, the idea that there is a single track, in which the US leads, the UK follows, and Europe falls in line after that and the rest of the world is ignored is bogus and, I think, exacerbated by the fact that the US tech giants — Google, Apple, Facebook and Amazon — loom so large on our landscape that we fail to consider it might be different elsewhere. We do this at our peril while the shape of digital publishing in different territories is undoubtedly shaped by a specific set of circumstances, this  doesn’t mean that we can’t learn something from them — I’ve been really inspired by Publit‘s approach to solving e-lending issues in Sweden with Atingo, by the scope and ambition of Brazil’s self-publishing platform Clube de Autores and the vibrant Online Literature scene in China and how this parallel industry, has sprung up next to an old one and is booming.”

SR: “Yes, having the chance to work with Nesta and take a deep dive into the digital transformation of China’s publishing industry was one our most interesting projects to date (‘The Publishing Landscape in China: New and Emerging Opportunities for British Writers’). What the Online Literature scene highlights is that all-important changing relationship between writer and reader, something also seen on Wattpad. I think the writer/reader relationship is one of the biggest things to watch over the coming years.

I think I’m still proudest of the projects we’ve set up that have writers at their heart like The Writing Platform and the Jerwood Fiction Uncovered Prize. One thing that really stands out for me is how the age of a writer has nothing to do with the appetite for change. You just have to look at how Margaret Atwood seamlessly shifts from writing werewolf poetry on Wattpad to short stories for Byliner, and then do a session with 20-something Creative Writing students whose end goal is to get an agent and a traditional publishing contract for a full-length novel.

JE: “Agreed, I think understanding what motivates people to read (or not) and understanding where reading fits into their lives (or doesn’t) is the other big question for anyone working in and around publishing, and will remain so for the forseeable. I’ve become slightly obsessed with the idea of the accidental reader – people who read a stack each day but don’t necessarily carve out time to Read-with-a-capital-R — I don’t think ebooks grew the audience for books, I think they cater for people who read books, I’m curious about what opportunities there are for expanding the market, for fiction in particular, connecting more readers with great stories is what so many of us are in it for after all.”

Visit The Literary Platform online to learn more about their work. Its forthcoming report, “The Publishing Landscape in China: New and Emerging Opportunities for British Writers,” will be published in May 2015.