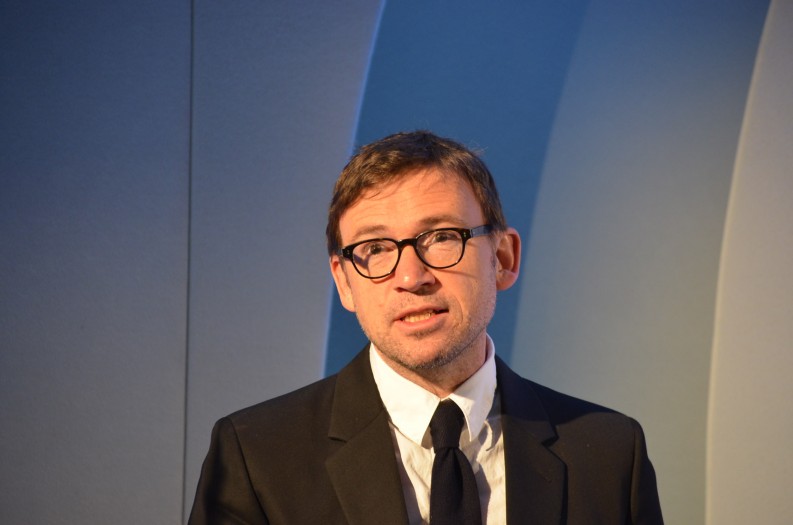 If one theme resonated at the London Book Fair’s Digital Minds conference, it was: even in the age of digital, we need to remember we are publishing for human.

The primacy of storytelling united the three keynote speakers at London’s seventh Publishing for Digital Minds Conference which began at Olympia yesterday, ahead of the London Book Fair.

Bestselling novelist and screenwriter, David Nicholls, said that he hoped that “the passion for those black marks, whether on paper or screen, remained undimmed,” while Rob Newlan of Facebook said “our role is to entertain, to drive the imagination.”

Hannah Telfer, Group Director, Consumer and Digital Development at Penguin Random House, said that “even the brightest new devices are empty vessels without the story” and used the analogy of Alice in Wonderland to talk about the multiplicity of rabbit holes now tempting consumers.

Nicholls talked about how far he had travelled down the digital road — and the moment he felt he had gone too far. “I was in New York, in a bar in Soho, and I took out a paperback and started reading. When I went to turn the page I found myself tapping the margin — I’d momentarily forgotten how to read. Maybe I was tired, or a little hungover, but I made a resolution to spend less time reading on screen.” This was one of a number of resolutions he mentioned as he related a kind of Pilgrim’s Progress–style journey in Europe, the US and Canada — and how his thoughts changed. Thus in Germany at Christmas, he noted how the bookshops were full of fiction, “whereas in the UK it’s about non-fiction gift books at that time of the year, and I began to realize that I used to give friends novels — like I used to give them mix tapes years ago — but that I hadn’t done this for years. So I resolved to give more novels as gifts.”

Spending time in New York, he was shocked to discover how many of his favorite bookshops had disappeared, and he remembered his own days as a children’s bookseller with Waterstones in Notting Hill Gate in the early ’90s. “And I remembered when Dillons [the UK chain of the ’80s and ’90s, eventually subsumed into Waterstones] opened when I was growing up and what a paradise it seemed.

“For all the ease of online shopping, a town without a bookshop is a town without a soul. And I think that to go into bookshops and then buy a title you’ve seen online is a genteel form of shoplifting.”

In Canada, when Kobo — he didn’t name the retailer, but everyone knew who he meant — asked him if he’d like to know “when people stopped reading your novel,” he knew he had reached some sort of tipping point. “I know texts can be infinitely adjustable now, but I don’t want that. Fiction is about telling, about those fixed black marks on a white background. Too much engagement is a distraction.”

Like many in the industry — perhaps all of us? — Nicholls concluded by wishing for a “peaceful co-existence of bookshops and a thriving digital sector,” but skirted the much trickier issue of whether this needed government intervention in terms of rate subsidies for physical booksellers.

The latter was briefly alluded to by Telfer, who mentioned the “state ballasted” infrastructures seen in parts of Europe. Telfer talked about a journey too, that of Lewis Carroll’s Alice through the digital landscape. She compared — in a good way — today’s app makers to “mad hatters” who were making “the new normal curiouser and curiouser,” and admitted that in the digital world, “it can seem as if we’re all the White Rabbit rushing along crying ‘I’m late! I’m late!” But not PRH, she added of course, with its investment in new skills, video, and digital expertise. Newlan, who had the difficult task of following an international bestselling author (“that’s why I’m using these cute pictures of my kids,” he joked) stressed the importance of “marketing for consumers, not at them” and happily flagged up those companies getting it right, among them Lonely Planet and “Nat Geo” — National Geographic. “Relevancy is the key. Your marketing, your storytelling doesn’t have to be ubiquitous. You can break it down now to the sectors that will be interested. You need to think people over pixels. People first. Strip back the digital front. There are 1.4 billion people on Facebook, and they’re all individuals. There is a massive opportunity there, but you have to embrace it in a new way. You have to move people.”

What rabbit holes of the future Alice may be tempted down is something the whole industry wants to know. The balance between physical and digital is one of the issues of the moment, with Nicholls admitting that he has resolved the dilemma by usually buying both formats of books at the moment. Telfer also noted that the fans of YouTubers like Zoella wanted to have the physical copy of her book.

It’s the industry tea party and remains fascinating to watch…