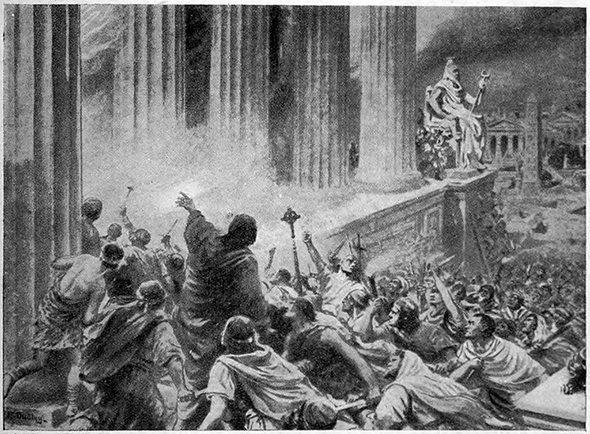 The European Association of Middle East Librarians are meeting in Algeria this week to discuss high-risk projects in Afghanistan, Mali, Iraq and more.

This week, April 28-30, the European Association of Middle East Librarians (MELCOM) will hold their annual conference this year in the spectacular city of Constantine, Algeria, which overlooks the gorges above the Rhumel River.

MELCOM encourages cooperation between European and world institutions concerned with all aspects of Middle East librarianship, book collecting, the book trade and publishing. Similar to the US-based Middle East Librarians Association (MELA), MELCOM’s membership, however, is international, and board members include librarians from the Bavarian State Library in Munich, the School of Oriental and African studies at the University of London, the library of the French National Institute of Oriental Languages and Civilizations or the Leiden University Library in the Netherlands. Previous annual meetings have been held in Turkey, Russia, Bosnia-Herzegovina, and Egypt.

This year’s conference, while touching on subjects for pundits such as catalogue annotations for ancient Arab manuscripts, chapter and verse divisions of Biblical books in Arab Christian manuscript tradition, and the cataloging of Islamic manuscripts in Bosnia, the most pressing issues at the meeting will doubtless be about the ongoing cultural destruction in the Middle East and saving, digitizing and rebuilding libraries.

Marie-Geneviève Guesdon, chief curator of Arab manuscripts at the National Library of France, will be giving a talk on the priceless ancient manuscripts in Timbuktu, which in recent years have been endangered as Islamic militants have swept over the region.

Andreas Drechsler, from the University Library of Bamberg, Germany, will speak about his experience establishing the new Central Library in Taloqan, Afghanistan. He recently spent several months at the University of Takhar in northern Afghanistan, participating in a project focused on “Capacity building in Librarianship.”

Drechsler has written that the project “was an interesting, unusual and enormously challenging experience for me. One of the many steps involved included visits to bookshops and seeing fresh and recent publications. And I have to admit that the results were a surprise for me. There is an abundance of new publications in at least three languages, and there are well-stocked bookshops, which are frequented by a lot of buyers. Which of course means that there is something like an intellectually interested audience there (at least in Kabul). Something has developed over the last decade or so. There is something like a traditional book bazaar on the road leading to Kabul University consisting of small bookshops pinned [sic] one after the other and which are all connected to bigger bookstores.” The Burning of the Library at Alexandria, Egypt in 391 AD, from ‘Hutchinsons History of the Nations’, c. 1910.

One of the most calamitous events in the cultural arena, amidst the destruction being wreaked in the Middle East by Islamic militants, was the ransacking of the Mosul library in Iraq last February, when over 100,000 manuscripts and books—many on the UNESCO list of rarities—were destroyed.

Laila Hussein Moustafa, of the University of Illinois, will be giving a talk on the destruction of cultural heritage in libraries and archives in the Middle East, a subject that she has been working on for a while now. Since she is based in the USA, Hussein is of course affiliated with MELA (like another speaker, UCLA’s David Hirsch, who will speak about the international treasury of Islamic manuscripts), but she feels that “MELCOM is closer in location to the Middle East, and they build a bridge between the Middle East and Europe and America.”

Because MELCOM’s meeting is in Algeria this year, “it makes sense to me to present my topic to the target audiences in the Middle East. My goal is to bring more awareness about creating a disaster management plan that can help, in time of war or conflict, in preserving the culture heritage in libraries and archives,” said Hussein.

“As you know, the Middle East is considered the archive of world history and the memory of the world. Attending MELCOM will give me an opportunity to build relations with the Middle East librarians and libraries in Europe and the Middle East. I will try to explore the opportunity of working with libraries in the Middle East and/or Europe on projects such as creating a disaster management plan, digitizing rare books and manuscripts and other projects that might help and benefit all humans. Also, my university encourages us to work with international communities.”

Another speaker, Helena Cobban, founder of Just World Books, comes from the publishing world. Cobban will be talking about print and digital formats in Middle East publishing. One of her goals when she founded her publishing company in 2010 “was to conserve in the form of print volumes some of the best of the writing that I’d found in various lively, well-informed blogs on the internet. I was always worried—and still am—that one day the entire edifice of the internet, including all the “cloud” storage systems, might come crashing down. This would have profound implications for society as a whole, of course; but one of my concerns was all the knowledge that would thereby get lost.

“I saw, and continue to see,” Cobban said, “print books on paper as being a heritage of all humanity. In recent years, we’ve seen acts of destruction of physical libraries—in Sarajevo, Baghdad, and now, tragically, in all too many cities in northern Iraq, northern Syria, Mali, and elsewhere—that between them are on a scale with the destruction of the great library of Alexandria. That’s why I’m delighted to go this gathering of librarians from all around the Mediterranean who between them are working both to upgrade and preserve the numerous fine collections of materials—ancient and contemporary—that their libraries contain.”