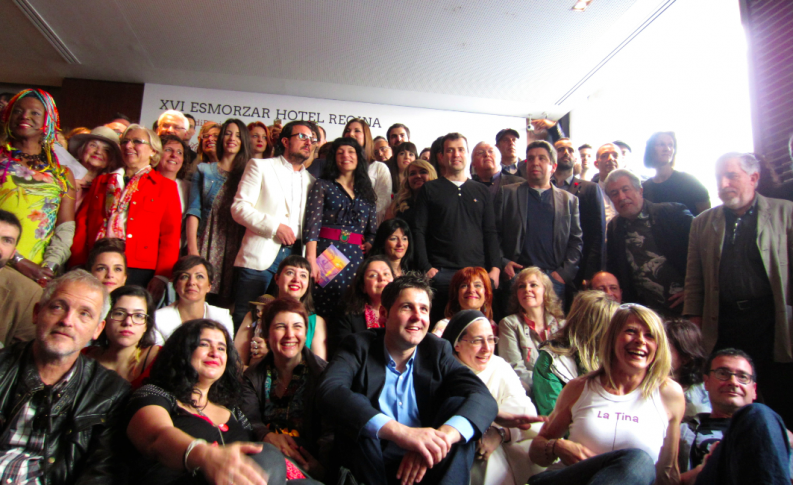 BARCELONA: In the early morning hours of the Dia de Sant Jordi, the Catalan festival dedicated to books and roses, hundreds of book and flower stalls are set up around the capital city of Barcelona, with a particular concentration on the Passeig de Gracia and the Rambla de Catalunya.

Each year on April 23rd Catalans pay homage to worldwide literature in cities and villages region-wide. Sant Jordi, or St. George, the patron saint of Catalunya was celebrated in the Middle Ages with lovers giving each other roses. In 1926, a Barcelona writer and editor, realizing that the date of Cervantes and Shakespeare’s deaths coincided with Sant Jordi’s, decided to launch the idea of giving books as well as roses to loved ones. The concept became so successful and enduring that 70 years later, inspired by the Catalan tradition, UNESCO declared April 23rd to be World Book and Copyright Day. Booksellers setting up stalls on the streets of Barcelona

Needless to say, Sant Jordi is a very important day for the publishing (and rose) industry. According to the Catalan Association of Booksellers, last year’s turnover was €19.2 million, representing 5–8% of total annual sales. Sant Jordi is not an official holiday and publishers prefer it this way, in particular when it falls on a weekday, so that a maximum amount of people will buy books. Companies also give books as corporate and employee gifts for Sant Jordi, which is an extra boost to sales.

“It’s the most important day of the year,” said Xavi Ayén, La Vanguardia newspaper’s literary journalist who has just published an 800-plus-page book on Latin American authors in Barcelona between 1967 and 1976. “It’s not a literary festival nor a book fair — it’s for everyone; every neighborhood celebrates. Bosses won’t say anything if you leave the office for several hours to wander the streets.”

“It’s a celebration about reading and books, a civilized and cooperative event,” said the Catalan Minister of Culture, Ferran Mascarell Canalda, who recounted that at age 11 his mother sent him out to buy his first book for Sant Jordi. He bought a book because of the beautiful woman on the cover, which turned out to be Stendhal’s The Red and the Black. A few years later he actually read it, and remains an avid reader, giving his friends a copy of his favorite book, Robert Musil’s The Man Without Qualities, every year.

Jordi Sellas, who is Director General for Creation and Cultural Industries at the Ministry of Culture said that while 65% of Catalans read at least one book a year, he is working along with the Ministry of Education to encourage reading, a cooperative effort that includes booksellers, publishers, libraries and the media.

Too Much of a Media Phenomenon?

Each year, he said, Sant Jordi has increasingly become a media event. “Writers are like rock stars on this day.”

But some are afraid that what has become a media phenomenon, evident by the hordes of photographers at the authors’ breakfast event held each year at the Regina Hotel (pictured at top), is getting out of hand. Spanish author Lorenzo Silva, who has written 48 books and has been coming to Sant Jordi for 19 years commented, “This has always been a big event. But recently there has been a conflict between literature and celebrities reading books. I think, though, literature is winning. You can see real people looking for real books. Literature has prevailed.” For the past five years literary and film agent Anna Soler-Pont, of Pontas Agency, has been inviting a handful of international authors and publishers that she represents or works with to Barcelona during Sant Jordi in order to strengthen relationships and show colleagues a good time.

Harvill Secker editor Michal Shavit and Alexis Washam, of Hogarth and Crown are both publishing Pontas author Milena Busquets’ This Too Shall Pass, one of this year’s Frankfurt Book Fair sensations. “I can’t imagine the streets of New York lined with books,” said Washam. “Just to see this many people looking at books on the street is rare and gratifying.”

It was Shavit’s first Sant Jordi; she found it “both humbling and breathtaking to see so many people celebrating, buying and reading books. It’s a wonderful and inspiring phenomenon.”

Busquets, whose Catalan language publisher, Izaskun Arretxe of ara llibres has already sold an impressive 18,000 copies in this relatively small market, seemed slightly shell-shocked by the international success of her first novel. “It’s incomprehensible. It sold so well in Frankfurt but I wasn’t so sure about the public. But it seems the publishers were right…”

In the end, said Paco Camarasa, founder of the bookshop Negra y Criminal, that specializes in crime fiction, there are two aspects of Sant Jordi. “There are those who buy one book on this day because it’s a tradition. Then there are those who support books invading the streets. They are patient with the traffic jams because they want books to occupy their streets. You wouldn’t be able to reproduce Sant Jordi anywhere else.”

A week ago Barcelona presented its candidacy to become a UNESCO City of Literature. Besides providing inspiration to innumerable foreign authors and being one of the world’s publishing capitals (in both Spanish and Catalan), the city council cited Sant Jordi as an example of Barcelona’s great literary value. It is a day when local and international authors and publishers can truly feel the connection between their books and the readers thronging the streets.