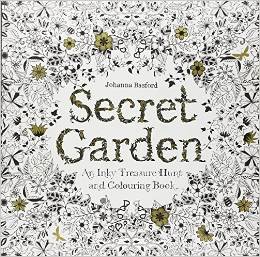 Writing for The Guardian, Alison Flood notes that, to the surprise of many, the bestselling title at Amazon USA is by Scottish illustrator Johanna Basford, whose coloring books are topping the charts.

Eleanor Blatherwick, the head of sales and marketing at Basford’s publisher, the small British press Laurence King, told Flood that, “It’s been crazy. The last few weeks since Enchanted Forest came out have been utter madness, but fantastic madness. We knew the books would be beautiful but we didn’t realize it would be such a phenomenal success.”

And it’s not just an American phenomenon. In the UK, the Art Therapy Colouring Book by Richard Merritt is in the #4 spot on Amazon’s bestseller list, Millie Marotta’s Animal Kingdom is not far behind in seventh, and a “mindfulness colouring book” is in ninth. With two of Basford’s titles in second and eight place, that means that half of Amazon.co.uk’s top 10 is made up of coloring books for adults.

Ana McLaughlin, head of publicity, marketing, and online at independent UK publisher Michael O’Mara (which has sold nearly 340,000 adult coloring books to date), says that the “craze” can be traded back to the way “the category has been re-imagined as a means of relaxation.”

“The first one we did was in 2012, Creative Colouring for Grown-Ups. It sold strongly and reprinted, but it was last year that it all really mushroomed with Art Therapy, in June. It really took off for us — selling the anti-stress angle gave people permission to enjoy something they might have felt was quite childish,” she told Flood.

Basford agrees, telling The Guardian, “I think it’s really relaxing, to do something analogue, to unplug. And it’s creative. For many people a blank sheet is very daunting; with a colouring book you just need to bring the colour. Also there’s a bit of nostalgia there. So many people have said to me that they used to do secret coloring when their kids were in bed. Now it is socially acceptable, it’s a category of its own. These are books for adults.”

McLaughlin, who told Flood that she see no signs that the trend will die down soon, noted that the adults who buy the books are proud of what they’ve colored:

“[The pictures] are all over Twitter and Instagram. People are really proud of them – they are so intricate,” she said. “You don’t have to have any artistic talent but what you create is unique. People send us pictures of them framed, and laminated. The appetite is simply enormous. I reckon people are taking their kids’ pictures off the fridge and replacing them with their own.”