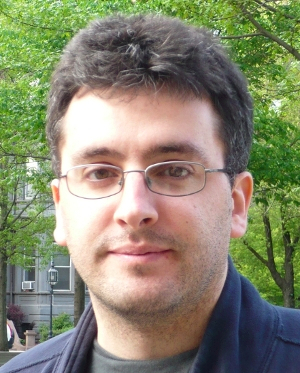 “Writing translated from other languages makes you see things differently,” says UK translator Daniel Hahn who will mine the Bologna Book Fair for gems to present to UK publishers for possible translation. In the British world of literary translation Daniel Hahn would be described in French as incontournable, which in English could be “a must,” “inescapable,” “that which cannot be ignored” or, as in this case, “a key player,” which would be the best fit.

Hahn wears many hats. Writer, editor and translator, he has worked as chair of the UK Translator’s Association, as national program director for the British Centre for Literary Translation and is currently chair of the UK Society of Authors. And thirty years after the first edition, the new Oxford Companion to Children’s Literature edited by Hahn has just been published. (In it, there’s a new entry on translation and translators).

In a few weeks time he’ll fly to the Bologna Children’s Book Fair wearing yet another hat. Funded by the Arts Council England, Hahn’s mission is to meet with as many agents and publishers of fiction in languages other than English as possible, to discover, choose, and then compile a list of children’s books that will be potentially attractive to UK publishers.

Back in the UK he will commission 30 reader’s reports, then will pick 15 of which he will commission quality sample translations of a decent length. By the beginning of September he hopes to have 15 sellable books to offer to a list of identified publishers. “I’m writing to them now saying that all I’m asking is that they read the translations,” said Hahn. Hahn is also hoping that the longer-term outcome will be that “some publishers will think slightly differently about Bologna and will take a wander in other halls [besides English-language] to see what people are doing. It’s about changing the habits of thought.”

Having translated two dozen books for adults (including Portuguese Nobel literature laureate José Saramago) and some for children, primarily from Spanish and Portuguese and occasionally from French, Hahn says his focus on children’s books is comparatively recent: “The scale of children’s books in translation is so small that the focus has been on adult literary fiction.”

His public involvement may have started with a speech he gave at the 2013 Marsh Award for Children’s Literature in Translation, when he said:

“We have some bad habits in the English-speaking world. We may be better than anyone at cultural export, but where import is concerned we are a disgrace. In the world of children’s books, despite the great work of many in this room, things remain worse even than in the world of adult publishing…. Writing translated from other languages makes you see things differently…It isn’t less important for children, but more. How could it not be vital for readers who are uniquely open to explorations of their own language; how can it not be essential for readers who, just now, are beginning to define the horizons of their experiences of the world.”

“We were all brought up on translated books, there used to be many more.”

Then, last fall, he explained to a live audience why, as a society, the UK would benefit from having more children’s books translated into English. For a young reader, stories should be as varied as possible and offer unexpected discoveries, stretching the mind and sympathies. He pointed out that many people have read The Swiss Family Robinson, Tintin, Pippi Longstocking, Asterix, or The Moomins, but that these books were written 100, 80, 60 or 40 years ago. Where are the books that have been happening since Hergé or Astrid Lindgren he asked?

“I am thinking about how we can make translating books for children something mainstream. I don’t think anyone has to get used to reading books in translation. There’s a strong sense when you get books in translation that people will be scared to read them. We have to get past this thing that other people are worried on our behalf. Children are certainly not afraid. What we need is to make it completely obvious to publishers and others that people don’t care whether a book is translated or not. I read lots of books in translation when I was a child and had no idea they were translated.”

We were all brought up on translated books, says Hahn—there used to be many more.

So to get back to what he’ll be doing in Bologna: “My contention is that there are lots of good books not written in English. I suspect lots of publishers here would like them but they can’t read them. The exceptionally good independently thinking editors are really good at trusting their gut and using their instinct but they are also the ones won’t respond to other people [translators] saying trust me, because their voice speaks to them so strongly. We need to find ways of getting publishers in the UK to find it easy to buy foreign books.”