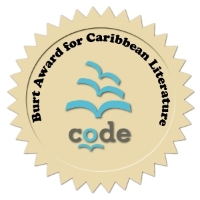 CODE and the Bocas Lit Fest have announced the finalists for the 2015 Burt Award for Caribbean Literature.

The shortlisted titles are (in alphabetical order):

Up to $22,000 CAD in prize money will be awarded to up to three winners, who will be announced at a Gala during the 2015 NGC Bocas Lit Fest in Port of Spain, Trinidad and Tobago (29 April – 3 May). As part of the prize, CODE will ensure winning manuscripts will be published by a Caribbean publisher.

The Burt Award for Caribbean Literature is an annual Award that will be given to three English-language literary works for young adults (aged 12 through 18) written by Caribbean authors. Established by CODE – a Canadian charitable organization that has been supporting literacy and learning for over 50 years – in collaboration with William (Bill) Burt and the Literary Prizes Foundation and the Bocas Lit Fest, the Award aims to provide engaging and culturally-relevant books for young people across the Caribbean.