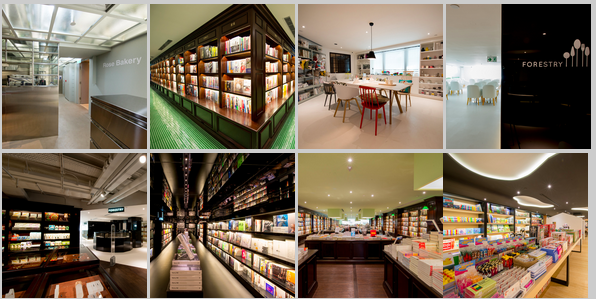 Photos of the Page One Bookstore in Harbour City, Hong Kong

Singapore-based Page One’s new bookstore concept in Hong Kong started by looking at what readers loved in books and building from there, says CEO Mark Tan.

HONG KONG: The Singapore-based bookstore chain Page One operates five bookstores in mainland China, three in Hong Kong, as well as another in Taiwan. It recently closed its store in Times Square, Hong Kong, which would would be bittersweet news, if its young flagship concept store in Harbour City hadn’t been proven so successful.

After opening last year, the 35,000-square-foot store in Tsim Sha Tsui marked a departure from the chain’s other stores that focus almost exclusively on books. Half the space in the new two-story store is dedicated to books and the remainder is an integrated retail and lifestyle space that includes the Rose Bakery, as well as a restaurant and florist as well as showrooms selling furniture, homewares and gifts.

This may sound like the business model the Taiwanese chain Eslite used to grow in Hong Kong and expand into China, but Page One founder and CEO Mark Tan is quick to point out that the two chains are very different. Not only does Eslite carry more Taiwanese books in traditional Chinese, while Page One is bilingual (the Chinese books are positioned on the right in the store, English on the left), he says Eslite sells products under the broad banner of “culture” while Page One takes a different approach.

“We do it from the creation of the author or designer — we investigate the books, we grow it up. We work from the bottom up, they are from the top up,” says Tan, whose stores are known for their focus on art and design books.

All the new retail options in the store, from the chic Danish furniture to the florist are inspired by books that Page One sells. Take the Rose Bakery. Tan has been stocking the Parisian baker’s cookbooks for years and visited her organic café on the rue des Martyrs.

“I have been looking at the pictures in her cookbooks for years and always wanted to go. The food is very good, so I said I want to speak to the owner and said, ‘I really appreciate what you have done — I want to have it in Asia. It is through the content that we have the bakery here,” says Tan.

He already regrets not creating space for a kitchen in the store where chefs whose books he stocks can give guest appearances and says the next new store will have a cooking classroom.

This new concept store is just the beginning. Tan established Page One in 1983 and after 30 years says he realized it was time to evolve if the business was to succeed. Competition from ebooks as well as the need to capture fickle readers short attention spans called for a radical rethink.

“We can’t sit here and wait for books to fly off the shelves, we have to make the shopping experience more attractive,” says Tan.

For three decades he’s lived by the philosophy “I read therefore I am” and it has served him well, but he says he’s now revised this approach and his new mantra — which is emblazoned on the store’s cotton book bags — reads: “I love therefore I am.”

What this boils down to is: “You find love in things you read about in a book, from there we develop the concept out,” says Tan.

Tan bristles at the suggestion that he has become very commercial. His defense rests on the type of products he will sell in his stores. For example, he says, he would never sell sunglasses. The retail selection is a very personal edit of the products and brands that Tan feels show real creativity — and are featured in the books he sells.

Unlike most book chains that use the same styling throughout all their stores, all Page One stores are different. And for the Hong Kong flagship store Tan has chosen a fashion designer, rather than an architect, to design the store.

“Fashion designers have a tough time because they have a limited space — a skinny model — to showcase their talent. I thought, what if I give a fashion designer a whole big space to work with, imagine the quality of the detail. So I asked Toby Yang to design the store,” says Tan.

It’s a classic case of thinking out the box, something that Tan has grown rather good at. Early on in the business he learned not to look at what other bookshops were doing — a lesson learned from an architect customer. He had put aside a book on an exciting new architecture project, but the architect didn’t want to look at it. Tan was stunned until the architect explained that he didn’t want to risk being influenced by the work and would prefer to get his inspiration from photography and paintings because then no one would know where his ideas came from. It was an important lesson.

“I realized that if you want to open a bookshop, don’t look at other bookshops. Look at fashion or anything else, but don’t look at the book business because if you do then you’ll only end up the same as them or worse, never better,” says Tan.