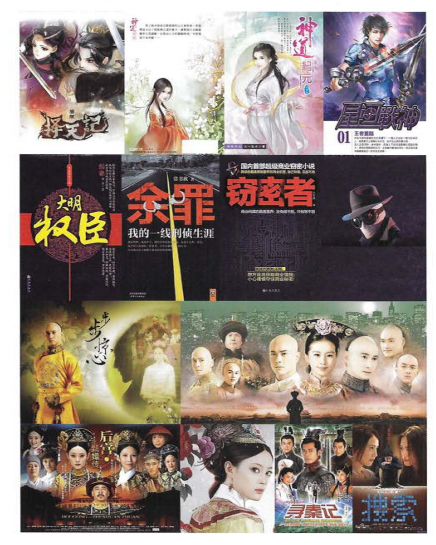 A variety of film, games and animation products have been spun off of Tencent’s network literature IP

In China, the powerhouse Tencent Literature mines its own IP for rights and licensing deals, while expanding this IP through acquisitions and partnerships.

This is just the latest in several recent events, including the launch of Alibaba’s 11 Main retail website, that demonstrates the increasing power and influence of Chinese online platforms. But when it comes to literature, this move marks the culmination of years of effort on the part of Chinese content sites, and particularly Tencent, to reach readers around the world. Earlier this year Tencent finished the acquisition of Shanda Cloudary, the pioneering Chinese self-publishing and digital literature platform, which includes well-known online literature sites such as www.qidian.com and chuangshi.qq.com. The acquisition was priced at RMB 5 billion ($800 million), according to Sina Tech.

Shanda, launched in 2008, was innovative in a number of ways, not the least of which was enabling Chinese writers to freely publish online and monetize their work through micropayments from readers as well as rights and licensing deals. As of 2010, it commanded 71.5% of the Chinese reading market (according to Iresearch). Licensing deals was baked into the Shanda model from the start, with the site finding early success with fantasy, YA, and speculative fiction which was spun off into to deals for television, film, animation and video game development. Among its most successful writers was Guo Jingming, who has become a star in his own right, producing and directing the wildly popular Tiny Times films.

This success and exploitation of IP surely made them a target for Tencent, which operates popular reading sites based on its QQ and Wechat platforms, but only established Tencent Literature in September 2013. This quickly grew throughout 2014 to some 15 million active daily users, 200,000 works of literature from 170,000 writers, with around 20 writers earning over RMB 10,000 ($1,600) a day.

Earlier this year, Tencent established a “reading group” to look at opportunities for further rights and licensing deals.

According to Analysis International, the revenue generated by digital mobile reading reading hit RMB 4.63 billion ($750 million) and is expected to reach RMB 10.32 billion ($1.65 billion) in 2015, with some 650 million active subscribers. The user base won’t be lacking.