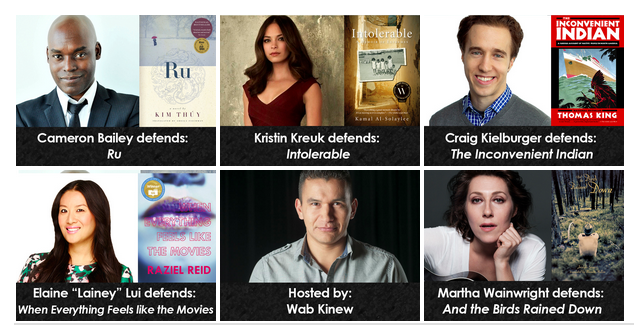 Canada Reads, a contest in which 5 celebrities debate various books merits and vote a title off each day on CBC TV, has serious implications for publishers.

You wouldn’t see this in the United States: celebrities fighting over books on TV. Well, not since Gore Vidal and Norman Mailer squared off against each other on the Dick Cavett Show, where Vidal compared Mailer to Charles Manson…alas, that was a long time ago.

This week, Canada can tune into Canada Reads, the CBC’s annual “Battle of the Books,” in which public personalities debate each other as to a book’s merits. One title, out of a starting list of five, is eliminated each day.

The books each have their own “champion” in this gladiatorial test of wit, wisdom and literary willfulness.

See this year’s line up below: For the publishers, the implications can be immense. Toronto’s Coach House Books is the publisher of one of the combatants and their title, And the Birds Rained Down by Jocelyne Saucier, will be defended by Martha Wainwright (sister of Rufus).

“It’s a three-year-old translation,” said Alana Wilcox, editorial director at Coach House, “and we originally printed 1,200 copies of the book. When it got picked for Canada Reads, we had to print another 12,000.” Considering that Coach House prints its own books on site in its offices in Toronto, this was no small commitment. Needless to say, Wilcox would really like to see the book win. “It would be great for sales and we really don’t want to take back those returns…”

The debates continue throughout the week and they can get heated. Tune in online to CBC’s Battle of the Books.