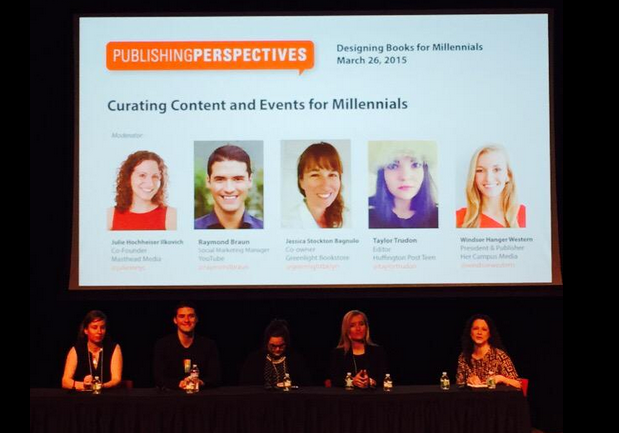 Publishing Perspectives’ “Designing Books for Millennial Readers” conference revealed that authenticity is the key to unlocking the hearts of millennials.

Last Thursday, as the world was entranced with the launch of the latest social media sharing app, the life-streaming Periscope for iOS, Publishing Perspectives hosted its, “Designing Books for Tomorrow’s Readers,” by New York City. Throughout, speakers reiterated, rephrased and rehashed one phrase time and time again when it comes to reading millennial readers: “be authentic.”

“Trying to speak to millennials in their own voice can backfire, it’s like an adult crashing a kids party,” said Raymond Braun, Social Marketing Manager for YouTube, and the man responsible for curating content for some of YouTube’s 150 million social media followers. Often this means hiring and working with individuals in this very age group, a demographic typically described as those born between 1980 and 2000.

And there is no shortage of Millennials to choose from, as they now account for some 77 million Americans, as many as the Baby Boomers. Of course, several cliches about millennials persist — that they are self-centered and entitled, for example — which may have given some hesitancy in hiring them but, as Randy Petway of Publishing Technology, noted in one of several keynote speeches at the conference, “Many of the stereotypes about millennials have also applied to previous generations.”

So, if you want to reach millennial readers, print should continue to be a top priority. And increasingly, you’re seeing the membrane between print and digital become even more permeable. To wit, the numerous YouTubers who has transitioned into publishing print books over the past year, including Girl Online by Zoe Sugg and My Drunk Kitchen by Hannah Hart.

Windsor Hanger Western, Co-founder, President & Publisher of Her Campus Media, was asked why she opted to publish a print book — The Her Campus Guide to College Life (released on on April 4 from Adams Media), from material that originated online, she said said that the print book was meant “to serve as a reference” for readers, something persistent, for them “to pull off the shelf and go back to time and time again.”

Reaching millennials ultimately comes down to “cultivating relationships,” said Braun, who advocated that publishers and authors help readers “peek behind the scenes” of the creation of their books instead of creating flashy, highly produced book trailers.

As always, the most effective form of marketing — to millennials or to anyone else for that matter — remains word of mouth. It was once again born out by the research from Publishing Technology, which revealed that 45% of millennials discover books through word-of-mouth, 34% through social media, and 32% through apps. “Of course, social media really is the equivalent of word-of-mouth,” said Petway.

So there you have it: be vocal — whether it is in person or online — and be real. if you can do that, the readers will (hopefully) come.