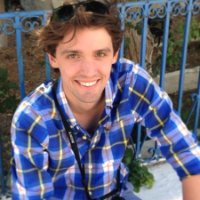 The Amazon Publishing France has hired its first employee, Clément Monjou, who will start by publishing a pair of translations under the Crossing imprint. Is Clement Monjou the smiling assassin of French publishing? Non

Writing at Ink, Bits & Pixels, Nate Hoffelder put it rather bluntly (albeit jokingly): “The whole of the French publishing industry fell into wrack and ruin today at the news [regarding] Amazon’s newest publishing venture.”

The news? ActuaLitte reported that Amazon Publishing France has hired its first employee, Clément Monjou, one-time editor of the ebook blog, eBouquin.fr. He will report to Dominic Myers, the head of Amazon Publishing Europe, with the responsibility of discovering “quality books to be translated and published in France.”

The first two titles from Amazon Publishing France will be under the Amazon Crossing imprint: the thriller Hackeur et Contre Tous by Dave Buschi, and a romance novel, Ladden et La Lampe Merveilleuse by Stephanie Bond. Three additional titles will be published at the end of the month.

Hoffelder concluded by noting that the Paris Book Fair runs this Friday through Monday, which allows for plenty of time for Amazon “to be pilloried for its crimes against the French publishing industry.”

Well, we all know that there are a lot of people in the French cultural industries — as well as the government — who strongly disapprove of Amazon.

How will the French respond? We shall see.