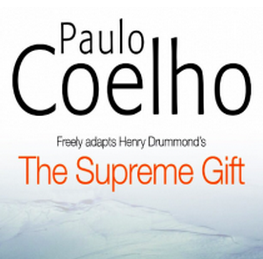 POD publisher and digital distributor Lantia will provide global print publication for a pair of Paulo Coelho novellas, beating out his traditional publishers.

POD publisher and digital distributor Lantia, with offices in Seville and Houston, already manages the catalogs of some fifty publishers and self-publishers, who largely take advantage of the company’s “set it and forget it” model of publishing which covers everything from cover design to POD distribution, sales reporting to royalty management. This month, the company about is about to add a global superstar to its roster, with the publication of two short print titles for Paulo Coelho.

Coelho’s literary agency, Satn Jordi Asociados, approached Lantia six weeks ago with a pair of novellas that had previously only been available as Kindle downloads: The Supreme Gift and Like the Flowing River. The books were successful, but perhaps not long enough to merit the attention of Coelho’s global network of publishers. Accordingly, Lantia and its hybrid self-publishing and management model came into the picture. What sealed the deal for them? Being nimble and prepared. “As we prepared the meeting, we realized that it was very important to make a sizable display of our capabilities,” says Lantia’s Enrique Parrilla (who is also the founder of an affiliated crowdfunding publishing platform, Pentian).

“We were meeting with Mr. Coelho’s agency on a Wednesday, and the prior Friday, we decided that we had to come to the meeting with both their online sales and title management interface fully ready and an actual hard copy of the books that right now existed only in EPUB format.

“We worked over the weekend to achieve both a custom-made website and the print-ready PDFs. On Monday we loaded two versions of the book that was going to be used as a sample (The Supreme Gift) to our system, and pushed the POD button that makes the books. Like clockwork, the order arrived at our production center outside of Seville, and the books were made. We physically picked them up on Tuesday and took a flight to Barcelona on Wednesday.”

Having these books in hand made all the difference, says Parrilla. “We were not just talking about producing great books. We actually had done it, and just like [the books] were created on the fly for them, they would be created on the fly for any reader. We also showed them Lantia’s interface with the books already loaded. They saw the sales interface with their corporate look and feel in a website that was ready to interact with them. I a firm believer in letting our actions speak for ourselves, and I think they did.”

Time and time again, Coelho has shown a capacity to experiment with his own rights strategies, at one time offering much of his backlist for free online and then offering exclusive ebook deals to a variety of retailers. In addition, he has advocated, most recently at the 2014 Frankfurt Book Fair, for the lowering the price of ebooks books in order to make them accessible to a wider audience and thwart piracy.

These new editions of The Supreme Gift and Like the Flowing River will be produced and distributed globally, using Lantia’s own infrastructure as well as Amazon’s POD services. The English-languages editions will go on sale in time for Valentine’s Day with further translations rolling out in the future.