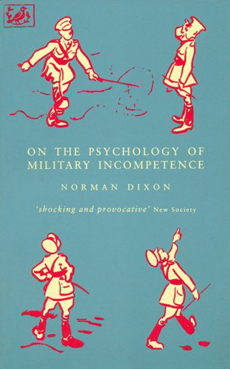 Madonna’s “Sex” had long dominated the list of the top most searched for out-of-print books, but there’s a new title on top of the list. BookFinder.com has issued its 12th annual list of the top 100 most searched for out-of-print books from the previous year.

This year’s list has seen changes from the previous year, most notably, the drop in position of Madonna’s Sex, which dropped down two places down on the chart.

And surprisingly, as the reports notes:

“American readers now seem to have a keen interest in the ineptitude of British military leaders with On the Psychology of Military Incompetence’by Norman F Dixon leading the list. The book dives into combat futility by using a fascinating series of examples of utter ineptitude throughout the 100 years prior to the book’s writing from the Crimean War to the Boer War and the disastrous ‘Market Garden’ operation of WWII. Dixon analyzes poor decision-making (or sometimes the lack of decision-making at all) from a psychological point of view.”

So now, without further ado, the top ten most searched for out-of-print titles:

It’s been called the definitive Bible of Colt of Cold Model 1911 handguns.

First published in 1955, the book has a story for every day of the year.

First published in 1991, the book is currently available only in a POD edition.

There was a revival of interest in this title after Glenn Beck “linked” it to a Barack Obama campaign video called “The Road We’ve Travelled.”

Written by King for the Hard Case Crime imprint, The Colorado Kid was a paperback-only edition.

The was the first novel written by King under the pseudonym Richard Bachman, later collected in 1985 as part of the hardcover collection The Bachman Books. King let Rage go out of print when it became too closely associated with several school shootings in the 1980s and ’90s.

The basis for the film “Stand By Me.”

Described as a “lively, conversational, step-by-step book on how to build one’s own bamboo fly rod.”

“This unique and penetrating book surveys 100 years of military inefficiency from the Crimean War, through the Boer conflict, to the disastrous campaigns of the First World War and the calamities of the Second. It examines the social psychology of military organizations, provides case studies of individual commanders and identifies an alarming pattern in the causes of military disaster.”