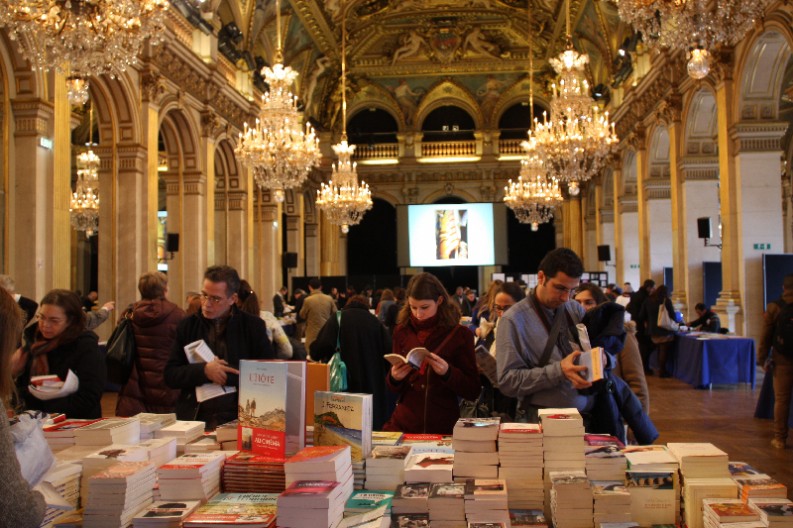 The scene at the Maghreb des Livres book fair in Paris last weekend.

Publishing in Algeria, Tunisia and Morocco still struggles to forge a market and identity distinct from that of its French forebears.

The 21st North African book festival, called the Maghreb des Livres, took place last weekend in a sumptuous wing of the mayor’s office in Paris. This year Tunisia was the guest of honor. Festival director Georges Morin opened the event by paying tribute to the late Algerian writer Assia Djebar, who was “a monument to Algerian literature and a female member of the French academy. She therefore represented many things…” The Maghreb des Livres, which doesn’t get any coverage to speak of in the mainstream press, even if the number of visitors each year hovers around 6,000, is like a vast bookshop with publishers displaying their newest fiction and non-fiction books on any subject that has to do with North Africa. There are books from Morocco, Algeria, Tunisia and France, in Arabic, French and Tamazight, a Berber language. But there are also literary gatherings with acclaimed writers, roundtable discussions and book signings with authors such as Kamel Daoud, Abdellah Taia, Leila Sebbar, and Boualem Sansal.

One of the first round-table discussions held on Saturday was on the subject of publishing in the Maghreb. Literary agent Pierre Astier moderated the talk and began by giving the public a general idea of the situation of the book market, which is still burdened with dealing with the legacy of its colonial past.

The Maghreb in Numbers

As for the size of the industry, there are approximately 240 publishers in Algeria, with another 40 in Morocco and 30 in Tunisia. Although French is not an official language in any of the three countries, of the 90 million in the region, roughly 33.4 million speak French; statistically, 64% are in Tunisia, 57% in Algeria, and 41.5% in Morocco.

Among the publishing professionals on hand for a discussion about the industry were Elisabeth Daldoul, who founded the Tunisian publishing house Elyzad ten years ago, Sofiane Hadjadj, who founded Algiers-based Barzakh with Selma Hellal in 2000, Simon-Pierre Hamelin, directs the legendary Librairie des Colonnes in Tangiers, Morocco, and Isabelle Gremillet, who runs l’Oiseau Indigo, a distribution company for Francophone books from Africa and the Middle East.

Elisabeth Daldoul founded Elyzad, in part, because she felt “literature was a way of opening up to the world. We can better understand and accept each other with literature.”

Reflecting on the post-revolution period in Tunisia, Daldoul said that in the early days people were reading less fiction and were in search of non-fiction and essays in order to understand the situation. “Fiction had become irrelevant,” she said.  “Four years later I am still asking myself this question. It’s difficult to return to fiction…we wonder what space our new government will afford to books, what texts will be used in schools. It’s a step by step process.”

Sofiane Hadjadj said that one of Barzakh’s driving concerns is to “repatriate the literary patrimony” back to Algeria. He cited the work of Assia Djebar, whose work was only translated into Arabic starting 2014, as an example of “someone we lost.”

“With decolonization we realized that our cultural production was all in France. It’s as if Le Clézio were published in Belgium. The question of literary patrimony is very important. How can we reconstruct our country if our cultural patrimony is not our own? It’s a matter of preserving our identity.”

One of the ways that Barzakh has chosen to work on this is by partnering with French publisher Actes Sud; an example of the positive aspect of this relationship is writer Kamel Daoud’s prize-winning success, Meursault, contre-enquête, (Meursault, counter-investigation) — first published by Barzakh in 2013 and then by Actes Sud a year later.

Simon-Pierre Hamelin, of the Librairie des Colonnes (infused with new energy and capital aided by its recent acquisition by Pierre Bergé) also publishes a literary magazine called Nejma, and is beginning to publish books as well, in the tradition of certain booksellers.

Quoting Algerian writer Kateb Yacine, who famously said “I write in French to tell the French that I am not French…. the French language was and still is a trophy of war,” Hamelin, who is French, said that this was unfortunately untrue, and bemoaned the brain drain of writers and intellectuals from the region, echoing a common remark from Moroccan publishers who say they are more accustomed to buying, rather than selling rights: “For Arabic-language publishing writers go to Lebanon and Egypt. Moroccan authors go to France or the Levant.”

Hamelin also brought up the complex customs tariffs between the three countries — it is impossible for him to import books from Algeria — from Barzakh, for example, because Algerian law requires the state to be paid the VAT on books in the three months that follow, which makes it a prohibitive cost for booksellers. Indeed, it is for this reason, to Isabelle Gremillet’s regret, that l’Oiseau Indigo has not yet been able to represent Algerian publishing houses. (Hamelin regularly smuggles a few copies of books published in Algeria back to his bookshop in his suitcase).

Looking Toward the Future

So how can this small market evolve in the future?

“I get the impression that our authors don’t trust us,” said Daldoul. “It’s up to us to prove that we know what we’re doing, that we are professional. I think our authors would like to be read in their own country!”

Hadjadj said that for the past 12 years the Algerian government, similar to Brazil’s, had been involved in the development of the book market, and that this had its positive and negative elements, but that overall it was important for the market, which is fragile and needs government support.

Hamelin said that there was very little aid for the book industry in Morocco and suggested that publishers from the three countries could collaborate more for better distribution in France and elsewhere. All agreed that governments in the region needed to be made aware of the importance of culture in human development.