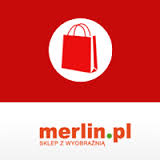 Poland’s top online bookstore, Merlin.pl, is up for sale, and many believe this is that of consolidation in a saturated Polish online marketplace.

Poland’s leading online bookseller Merlin.pl is said to be up for sale by its owner. The planned deal could shake up the country’s online book market, which is becoming increasingly saturated, and pave the way for mergers between local market players, industry observers say.

The website’s owner, local retail group Czerwona Torebka (Red Handbag), acquired Merlin.pl in 2013 for an estimated 51 million Polish zloty ($14.5 million). Fifteen years following its launch in the Polish market, the website, which offers not only books, but also music, DVDs and video games, says it has some 13 million unique users, a product portfolio of some 500,000 products, and handles an average of 3,000 orders per day. Merlin.pl posted revenues of an estimated 100 million zloty ($28.4 million) in 2013.

Local business daily Rzeczpospolita reports that the sale is the result of Czerwona Torebka’s financial woes and its urgent need of fresh cash which could be obtained from the potential deal. Sources close to the company said that the online bookseller has been put on sale by Czerwona Torebka.

“We don’t want to rule out any option which could be beneficial for the further development of the project, and which could attract investors,” said Pawel Ciszek, the chief executive of Czerwona Torebka.

Meanwhile, local analysts say that the deal could pave the way for mergers between Poland-based online booksellers. In 2013, Czerwona Torebka’s bid for Merlin.pl of 51 million zloty was only half of what Empik — Poland’s largest brick-and-mortar bookstore chain — was ready to pay for the website. However, the chain’s bid was discarded by the country’s competition watchdog UOKiK, which feared the deal could upset the market balance. Empik currently operates some 200 outlets in the Polish market.

“This is why, in the current sale process, a [book] industry player is unlikely to [acquire Merlin.pl], as companies are afraid of another veto by the regulator,” said a source from the financial sector.

However, industry observers say that an online retailer without a stake in the book industry could successfully secure the UOKiK’s permission to acquire Merlin.pl.

“In mature markets, such as the German one, ten of the largest online retailers control an aggregate 50% of the market. In Poland this share amounts to less than 10% of the total, so an industry consolidation is inevitable,” said Piotr Jarosz, the publisher of Sklepy24.pl, a publication on Poland’s e-commerce.