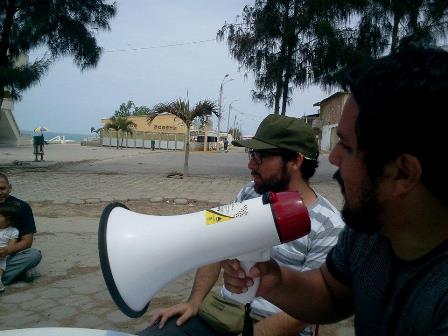 One of Peru’s fledgling publishers, Colmena Editores is making room for edgy, new generation of authors, while also offering classics and criticism.

Fundación para la Literatura Peruana unveiled the winners of their first program to support the publication of fiction books by Peruvian authors. Each of the winners – Editorial Estruendomudo,Paracaídas Editores, Colmena Editores and Animal de Invierno — received a subsidy of around US$1,400.

Yesterday, Publishing Perspectives spoke to Estacion Cultura. Today, we talk to Armando Alzamora of Colmena Editores about his business, roster of books and, of course, the titles to be financed. Colmena was set up by a group of literature graduates of Federico Villareal National University, taking its name from the avenue facing their offices.

Generación Cochebomba, by Martín Roldán Ruiz, was the title selected for the subsidy and the first edition of 500 copies sold out in just three months, making it Colmena’s top selling title. The book was initially published by the author himself, a Peruvian writer and journalist, in 2007 and received wide attention from radio stations and blogs, which lead to invitations to seminars and even thesis projects on the novel.

It tells the story of a group of Peruvian teenagers during the ’80s — a decade of scarcity, inflation, the Sendero Luminoso terrorist group and also “coches bomba” (car bombs) — and their experiences with drugs, alcohol and rock music. This same youth underground culture is present in Roldán’s second book, Este amor no es para cobardes, published in 2009 with another publisher, which focuses on the phenomenon of “barras bravas” in South American countries (groups of football fans who cause chaos and mayhem in and outside stadiums).

“Our readers are pretty diverse. For example, an average reader who is interested in new and bestselling titles could try Machado de Assis or Roldán. A specialized reader might want to go for poetry or for our collection of critical texts that we plan to launch this year,” says Armando Alzamora, publishing director.