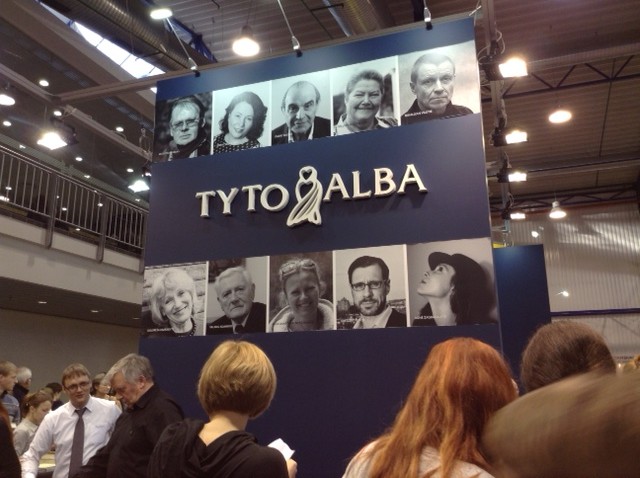 The Lithuanian book market was hit by the global recession and remains small, but a coterie of publishers are forging ahead through diversification.

Founded by publishers in 1999—nine years after Lithuania’s independence from the former Soviet Union—the Vilnius International Book Fair was created by and for Lithuanian readers, who to this day continue to celebrate the intellectual freedom that books represent. “We are a nation of books,” declared Dalia Grybauskaitė, President of the Republic of Lithuania and keynote speaker at the fair’s ceremonial opening: “we have achieved twenty-five years of independence through freedom of thought and words.” To visitors and natives alike it doesn’t take long to realize that Lithuania’s growing publishing industry is a powerful symbol of the country’s national pride. And the fair itself, hosted in a sprawling modern complex that boasts 300 exhibitor pavilions, dozens of conference rooms for readings and talks, a creative studio, a music hall, a children’s stage, art exhibitions, and a cinema for book-inspired and book-related films, stands firm as Lithuania’s largest annual cultural event. It draws between sixty and sixty-five thousand people over four days.

In large part this is because the fair is every bit as enjoyable and popular as it is symbolic. The President was raucously welcomed to the stage by beloved TV prosecutor and theatre star Andrius Bialobževskis, who, in honor of this year’s theme (“Crime Fiction: Impossible to Shoot Down”), sleuthed his way from the expo halls to the opening ceremony, where his journey was being screened live as well as accompanied by a frenetic performance from Gediminas Gelgotas’s New Ideas Chamber Orchestra. From there both the President and the Minister of Culture spoke movingly on the importance of books and reading to Lithuanians everywhere, while remarks from the Mayor of Vilnius invoked Ray Bradbury and Groucho Marx.

After a few short minutes it was evident how distant we were from the deal-focused, closed-door atmosphere of the, say, the London Book Fair: Vilnius is welcoming, reader-focused, lively, and snobbery-free. Admittance is cheap (just a few euros), and on the fair floor you can catch bestselling authors mingling and joking with their fans. The funniest example was certainly that of Andrius Tapinas, who—as stunt to promote Day of the Plague, the second volume of his phenomenally popular YA steampunk tetralogy—applied fake boils to his face and quarantined himself in a cage on the fair floor. Off the floor, meanwhile, free programming abounds; an attendee can generally choose from six panels, talks, or readings per hour. Apart from being an exciting event for readers, the fair is also a profitable commercial undertaking for participating publishers. Floor space is inexpensive—€60 per square meter for large publishers, with a discount available to small presses — and each house moves an impressive amount of stock. Tyto Alba, one of Lithuania’s largest presses (with 27 employees producing over 100 titles annually), reported 6,000 books sold at this year’s fair, a figure which bested their sales from 2014. A bookseller at the Lithuanian Writers’ Union observed that it actually isn’t uncommon for a big stand to sell 5,000 books in four days, noting that many book lovers and bargain hunters begin preparing their wish lists nearly six months in advance. Publishers sell directly to consumers, so most houses can afford to be liberal with their discounts, and the reading public takes full advantage of this—to the point where the fair is fondly referred to as Vilnius’s “Second Christmas.” A quiet day at the VIBF for Alma Littera and Baltos Lankos, Lithuania’s two largest houses.

The fair is advantageous to publishers in another way, as its annual theme has a measurable impact on the types of books Lithuanian authors write and submit. Milda Gembickienė is the Head of LitExpo—a team of five that, alongside the Lithuanian Publishers Association and the Lithuanian Cultural Institute, assumes organizational responsibility for the fair—and she confirms that this year’s crime fiction theme was in part chosen to encourage Lithuanian writers to experiment more with a genre they have, typically, shied away from.

This resonates with the Minister of Culture’s opening remarks, where he declared his hope that the fair will spark “crime fiction curiosity,” and will furthermore show readers the joy of crime novels: a joy that, for him, is the satisfaction of seeing “tangled or dangerous stories resolved.” Nor is this choice random, as the Lithuanian market is subject to the same fluctuations and slumps as any other.

Publishers across the board have noticed a general decline in adult fiction sales since 2009, and the encouragement of writers to produce crime novels—a popular and profitable genre in the European market—may well be an attempt to fan up a flagging readership. “Children’s literature has stayed steady [since the recession],” commented Dr. Jurgita Ludavičienė, Senior Editor at Tyto Alba, “because parents will still buy books for their children, even if they can’t afford to spend money on themselves. That said the Lithuanian market is still quite small, and publishers have to do a bit of everything to keep going. We can’t afford to specialize.”

Diversity is certainly the name of the game with Alma Littera and Baltos Lankos, the first- and second-largest publishers in the country, who were founded very shortly after Independence was declared in 1990. Along with cookbooks, self-help books, gardening books, and a strong showing of contemporary Lithuanian writers, both presses boast spectacular selections of foreign fiction in translation.  Of the two the Alma Littera Group (which includes the publishing house as well as a bookstore chain with 31 branches) is clearly the giant in the field, posting sales of €29.27 million in 2013, employing a staff of 540, and releasing 385+ new titles per year.

Baltos Lankos, meanwhile, releases roughly 120 books annually, and is like Tyto Alba more concertedly highbrow in the curation of their list (though Baltos Lankos is candidly pushing harder into the profitable arenas of popular fiction and children’s lit, while Tyto Alba is open about the necessity of subsidizing literary fiction with sales from more commercial genres). Also in the mid-to-large category is Versus Aureus, founded in 2003: clocking in at over 100 titles per year, they publish in a range of genres, place emphasis on high literary standards, and began a series for Lithuanian debut fiction in 2006. Versus Aureus is also notable for taking risks on recent English-language fiction of interest to the Baltic region (including works by Antanas Šileika and Tamas Dobozy, both Canadian-born).

The brightest star of the book fair, however, may well have been Apostrofa, the small-yet-feisty press founded in 2003 by Lithuanian publishing doyenne Giedre Kadžiulytė. Kadžiulytė has been in the business for over 30 years and was one of the founders of the Vilnius International Book Fair. She has no employees (“Employees?! I’d need an office for that!”), and with the assistance of an accountant, she singlehandedly ushers about 10 books annually to market. With an emphasis on sociological theory, philosophy, and history, Apostrofa’s list also includes fiction, drama, poetry, and memoir: Sjón’s The Blue Fox, Robert Musil’s The Dream, Jerzy Grotowski’s Towards a Poor Theatre, Rilke’s Roses, and Czesław Miłosz’s Native Realm are just a few examples. Of course by comparison to Alma Littera, sales are miniscule—€60,000 annually—but Kadžiulytė freely admits that money isn’t what brings authors to her press. “They come here,” she says with an impish smile, “for the Apostrofa magic.” And there clearly is magic afoot: since its founding in 2003, the press has won national prizes and design awards regularly, and punches well above its weight in prestige.