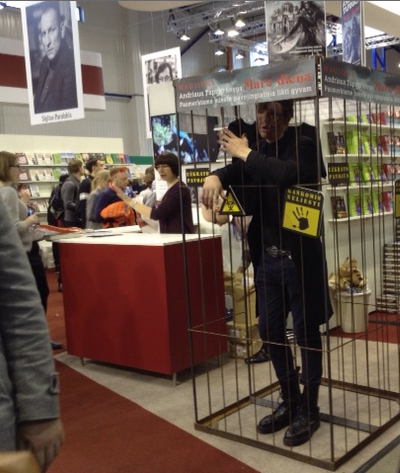 For many in Lithuania, there is the sense their literature is still waiting to be discovered by the world, though there are several authors of distinction. Bestselling YA novelist-Andrius-Tapinas plugs “DAy of the Plague” at the Alma-Littera stand at the Vilnius International Book Fair.

For all the bustle of the 2015 Vilnius International Book Fair and for all the commercial and critical success within Lithuania of novelists like Sigitas Parulskis and Kristina Sabaliauskatė, there is a sense in which Lithuanian literature is still waiting to be discovered.

Writers like Dalia Grinkevičiütė and Laura Černiauskaitė are achieving distinction in a type of hybrid nonfiction genre referred to as “magic essayism” (a combination of the essay, the diary, and the short story, a bit like the crónica in Spanish and Portuguese), yet fiction and nonfiction writers alike continue to struggle against a literary history weighed down by sentiment, by years of Soviet censorship, and more recently, by an idealizing nationalism.

It’s only within the last 15 years that, to return to the words of the Minister of Culture, Lithuania’s most tangled and dangerous stories have been publicly explored — if not resolved — in a candid and more sustained way. The ethnic confusion brought about by living for centuries as an occupied country; the “horrible psychic scar,” to quote literary critic Gabrielė Gailiūtė, of Nazi collaboration; the savage genocides that took place just outside Vilnius in 1941; the systematic persecution of teachers, lawyers, doctors, and clergymen by the Soviet regime; and, perhaps most pervasively, the long-term national consequences of having lived, in fear, as a people long-deprived of public intellectuals and leaders; all these are troubling and fascinating realities that lend richness and gravity to the Lithuanian perspective.

Crime fiction may have been the outward theme at the 2015 Vilnius International Book Fair, but the ongoing mystery is what Lithuanian literature will achieve as it embraces the full weight of its past — and I, for one, look forward to watching the mystery unfold.