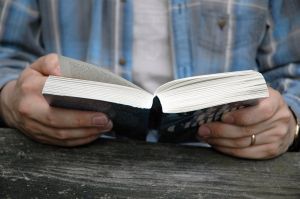 A new survey by the NEA reveals that a mere 54% of Americans read any kind of book last year, print or digital. At MarketWatch, Quintin Fottrell broke down the results of a new survey by the NEA along with research by the marketing firm Nielsen to determine what exactly Americans are reading and how it breaks down by gender.

Some of the results:

While reading fiction rose from 2002 to 2008, it’s been falling off ever since, and is now back down to 2002 levels. According to Fottrell, “The decline in fiction reading last year occurred mostly among white Americans, including men and women of various educational backgrounds; rates held steady among non-white and Hispanic groups,” according to the report.

There were state by state differences as well. In Washington, 63% read literary fiction, dropping down to 56% in Colorado, Rhode Island and Connecticut, with just 37% in Nevada, 36% in Virginia, and…34% in Alabama.

A mere 54% of Americans read any kind of book last year, be it print or digital, fiction or non fiction. But fiction has seen the greatest drop in sales, according to Nielsen. While adult print book sales fell 2.5% to around 501.6 million from 2012 to 2013, non fiction sales were stable at 225.2 million; fiction sales dropped 11% to just 103.5 million. Poetry saw the sharpest decline in readership of any “literary genre,” falling from 12% to just 6.7%, according to the NEA.

But why the drop in fiction sales? Author Christopher Sorrentino speculated that biographies and self-help books could have a “certain utilitarian appeal. “Who wants to spend two weeks reading a novel that you might not like much?” he asked Fottrell.

And in an era of social media, it’s more and more difficult to “bond around the water cooler” to talk about a novel. Sorrentino pointed out that while there are thousands of novels published every year, only “a few hundred” get noticed, even by a “discerning reading public” either through newspaper reviews or celebrity endorsements. And while there are those occasional books that do go water cooler cool such as Gone Girl or Fifty Shades of Grey, “It’s really hard to read William Faulkner and go into the office and say, ‘What did you think of that last chapter of Light in August?’ In addition, he pointed out; people who might normally be attracted to novels can get fictional narratives complete with “complex characters” on cable TV.

Another possible explanation for the drop in popularity of fiction, Fottrell speculates is simple narcissism: “Americans,” he writes, “may be more fascinated with their own lives
than with those featured in great works of literary fiction.” 56% of Internet users, he points out, have Googled themselves.

Then add to that self-interest the wide array of easily accessible entertainment such as online gambling, music, and movie and TV sites such as Hulu and Netflix (according to a 2013 report by eMarketer, Americans spend 23 per hours each and every week ‘using social media, emailing and texting”), it’s a wonder that anybody has time to read anything at all.