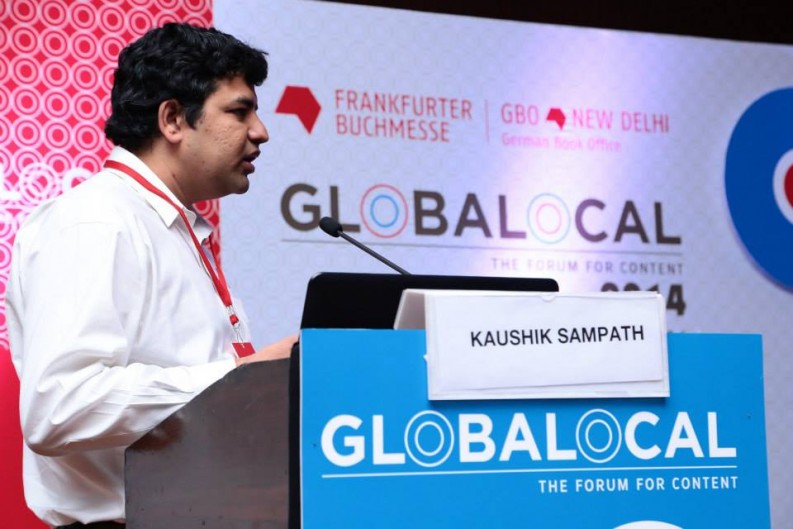 This week’s GLOBALOCAL conference in New Delhi will bring international publishers side-by-side with some of the who’s who of the publishing trade in India.

This year’s GLOBALOCAL conference (12–13 February 2015) in New Delhi will see an increase in the “global” quotient, with several international speakers sitting side-by-side with some of the who’s who of the publishing trade in India. In its sixth edition, the conference this year has drawn speakers and delegates from ten countries. This includes attendees from Germany, US, UK, Russia, Israel, Malaysia, Italy, France, Spain and India.

GLOBALOCAL: The Forum for Content is the flagship conference of the German Book Office, New Delhi. Since the time of the GLOBALOCAL in 2010, when it was a unique roundtable of publishers from across India, the conference has undergone continuous alterations in its scope and format – to appeal to the changing business needs of both, the Indian and global publishing industries. The roster of speakers this year not only covers a geographical span but also includes those from legacy publishing, printing, new media and digital services.

To be held just ahead of the New Delhi World Book Fair (14–22 February 2015), GLOBALOCAL 2015 will comprise panel discussions, workshops, and experts’ interactions. The Business Matchmaking session – which the organizers say is a format imported from Frankfurt Book Fair, and which was very successful when it was launched in Delhi in 2014 – is back this year to facilitate focused interaction and networking among the delegates.

“The Upward Curve in Publishing,” will be the topic for a panel discussion by CEOs and senior managers who represent trade publishing, school-books, online retail, marketing and sales, and exports. Academic publishing, which commands a significant space in India’s publishing industry, but which gets very little press, will be discussed by a panel that will focus on “Higher Education in the New Age.” Heads of the Indian subsidiaries of academic publishing companies like OUP, Sage, and Taylor&Francis will share stage with the librarian of one of India’s most prominent public central universities, the Jawaharlal Nehru University, as well as the executive director of US-based Copyright Clearance Center.

The training component of the program will feature four workshops: Rights & Licensing in the Age of Transmedia; Marketing for the Future; Re-thinking Strategy and Monetization; and, Re-energizing the Brick-and-Mortar Bookshop. Delegates can also consult experts for ideas and with their queries. Each of the two days of the conference will close with the matchmakings and an “Idea Incubator” session to generate ideas for: New Formats in Publishing; and, Future of the Book.

An “Experience Zone” is the addition to this year’s GLOBALOCAL; it will be a space for brands to display their products and services to the delegates attending the conference.

To foster better exchange between Germany and India, a delegation of publishers from Germany have taken part in the ‘Exclusive India Trip’ that began on 8 February and will conclude at GLOBALOCAL in Delhi. The trip has been curated by the GBO New Delhi every year since 2013 to introduce foreign publishing professionals from around the world to the book-publishing scenario in India, through visits to publishing and its allied trade companies.

The foreign publishers are visiting companies in Delhi and Chennai, the two prominent hubs of publishing in India. The participants have been introduced to a selection of publishing houses, bookstores, and digital services companies. They are also interacting with literary columnists, editors, and authors.