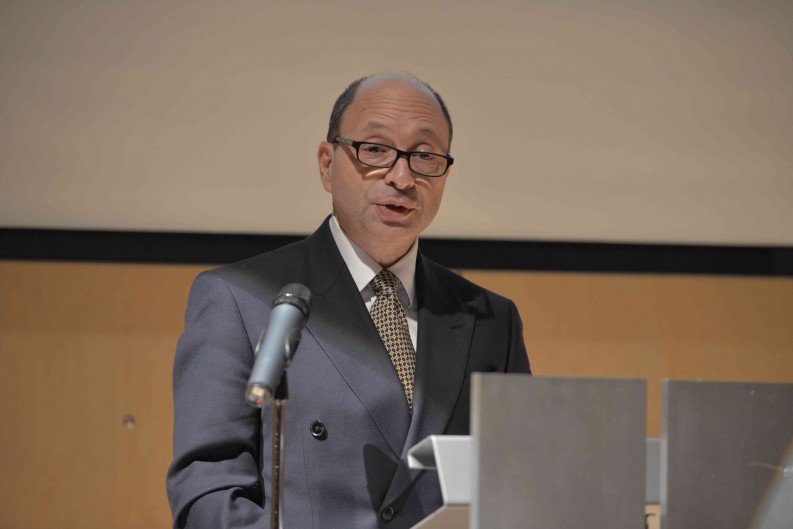 The following laudatio was offered by Harold Augenbraum in honor of Norton executive editor Robert Weil receiving the 2015 Friedrich Ulfers Prize given as part of the Festival Neue Literatur in New York City on February 19.

By Harold Augenbraum, Director of the National Book Foundation

Thank you for inviting me here tonight to offer a laudatio to Bob Weil, with whom I have worked on various literary projects, formally and informally, for over twenty years, and whom I consider to be a valued colleague and a dear friend.

Editors need several very specific characteristics to make them successful. Among them are sensitivity to the beauty and effectiveness of language, comfort with narrative structure, an almost intuitive ability to recognize when a book works and when it does not, and the perspicacity to say why. A publisher needs different talents and skills. A marketer and a publicist will need still others. These are the cadre of professionals who must participate in making a book if it is to be a successful work of art or scholarship or journalism, and a commercial product. Bob Weil, I know, will claim tonight that he is an editor, but I’m here to disagree with him. It goes without saying that as an editor he’s a genius. But he’s not just an editor, and I use the word “just” advisedly, since my admiration for great editors knows no bounds. Bob goes beyond the list of skills an editor needs. He adds to it the skills of a consummate publisher, and a creative marketer and publicist.

As a concession to the obvious, let me begin by focusing on Robert Weil the editor. There are about five or six great fiction editors in the United States, people known in the book business for their acuity. Bob is one of them. His work on Henry Roth’s unwieldy piece of brilliance, Mercy of a Rude Stream, was simply brilliant itself. It was as if Bob knew where the genius resided in all that verbiage, and how to shape it, the way a sculptor removes pieces of marble until a perfect statue remains. It was collaboration between an artist and a craftsman. This process works analogously in translated literature. Great writing in translation passes into the seine of the editorial craftsman, who filters it and passes it back to ensure its continued greatness. No one works better with translated work than Bob; his publications of translated German literature are sterling. He has published extraordinary works by Heinrich Boll, Wolfgang Koeppen, Bertolt Brecht, Franz Werfel, Fred Wander, and Clemens J. Setz.

In my mind, however, as great a fiction editor as he is, Bob Weil is, bar none, the best nonfiction editor in the United States. I have seen him nurture academics who might have written dead books into stars of American nonfiction writing, waiting patiently, cajoling incessantly, with the warm encouragement needed to bring out the best in an author. He has an unearthly feel for what makes a book work, if its structure needs wholesale change, or just a tweak, if its characterizations lack vitality, direction or pomp. Among the works he has published on German history and culture are The Conquest of Nature by David Blackbourn, Jonathan Sperber’s biography of Karl Marx, and Elisabeth Sifton’s The Serenity Prayer.

And when the book is finished and it is ready to go out to meet the world, when the usual editor’s work is done and it is handed over to the publisher and the marketer and the publicist, Bob is there still championing the work with what we in the marketing business call “influencers”: the press, the people in the business who can help create word of mouth, the people whom authors want to know about their books. The difference between an editor and Bob Weil lies in the difference between an editor’s desire to help create a great book and Bob’s interest, which is also to create a great audience. Such people go beyond publishing into the realm of enriching people’s lives. Of course Bob Weil champions the advancement of German literature in the United States. But he does so along a spectrum of interest: He draws wonderful work from terrific writers, he helps make them the best they can be, because he loves their books. The difference between a good book person and a great one is that element of love.

We are here tonight to laud Bob for championing the advancement of German literature in the United States, but in Bob Weil’s case I want put it a bit differently. We are here tonight to laud Bob for his love of German literature, German literature in translation and books about German history and culture. Other publishers publish Joseph Roth, but Bob has been key to creating a Joseph Roth audience in the United States. Few other publishers would be able to take on the collected poems of Bertolt Brecht, as Bob has done, and make it a success, as I know he will. He will use all his editing skill and then his entrepreneurial zeal to ensure that these books will find a new audience in America. That audience will benefit from the richness of a literature that Bob will make sure they love as he does. No one, absolutely no one, works harder than Bob Weil to make sure that these and other German authors are read, understood, and admired, that readers get the brilliance they crave and authors get the audience they deserve.