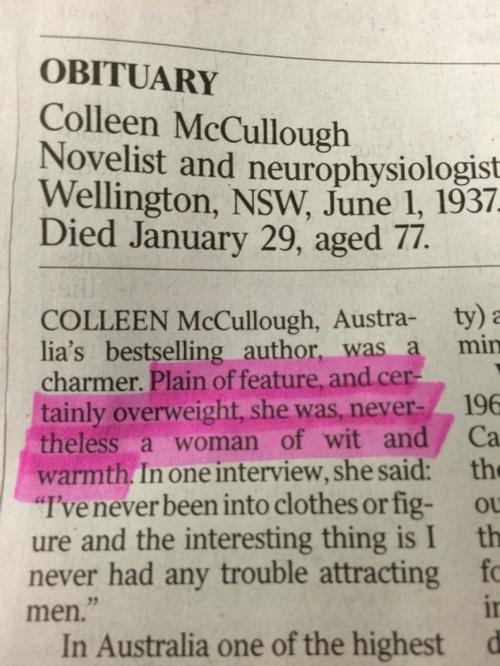 The Australian opened its obituary for the country’s bestselling author, Colleen McCullough, with this: “Plain of feature, and certainly overweight…”

Author Colleen McCullough died on January 29 at the age of 77. She was a trained neuropsychologist. She was a best-selling author whose book, The Thorn Birds, sold 30 million copies worldwide.

Yet in her home country of Australia, the newspaper The Australian opened its obituary with this: “Australia’s bestselling author was a charmer. Plain of feature, and certainly overweight, she was nevertheless a woman of wit and warmth.”

Let me repeat that: “Plain of feature, and certainly overweight, she was nevertheless a woman of wit and warmth.”

Not surprisingly, her friends and comrades in the literary world took to Twitter under the hashtag #myozobituary to mock the obituary.

What exactly does a woman have to accomplish in her life in order to not be immediately judged on weight and appearance?

A few of selected tweets:

Although his beard looked like someone had glued it on & his hair would have been unconvincing as a wig, he married a rockstar #MyOzObituary

Johnson, who had an unattractive pointy nose & crooked teeth, was nevertheless a writer of nine works of fiction #myozobituary

'Spotty of chin and wide of thigh, she nonetheless summoned the courage to leave the house and do things.' #myozobituary

Despite a nose like a bowsprit and an allergy to hairdressers, she was able to type almost as well as a man. #myozobituary

"Odorous and living in a drain, Spargo-Ryan nevertheless trained her lice circus to international acclaim." #myozobituary

Despite a forehead like a solar panel and hair mown by the blind, Benjamin Law had basic literacy and dabbled in social media. #myozobituary

Despite never discovering that magical t-shirt that hid his girth adequately, he managed to leave the house to tell some jokes #myozobituary

#myozobituary would be “Although she grew a disappointing arse, she nonetheless got laid & won awards."