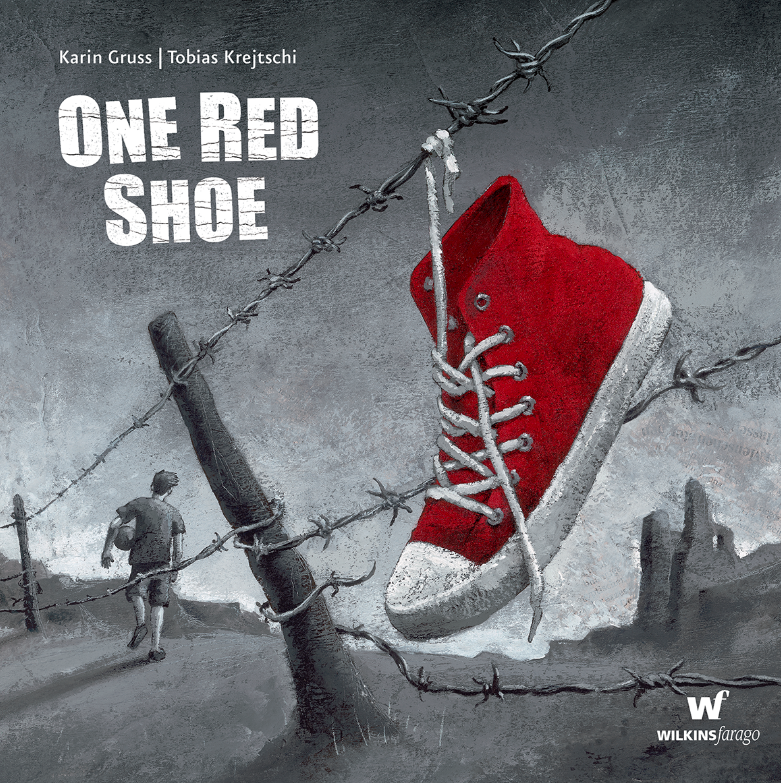 Andrew Wilkins of Melbourne’s Wilkins Farago discusses how the publisher’s mission extends beyond convention to explore cultural exchange and emotion. Is there a market for children’s books that don’t necessarily make you feel good or teach you a lesson, but make you think, that make you feel? Andrew Wilkins thinks so. The Melbourne-based publisher of Wilkins Farago has been producing books that are not only thought-provoking and moving, but help cross cultural divides.

The press’s latest work is One Red Shoe, written by Karin Gruss (a former publisher who oversaw the picture book program at Peter Hammer Verlag) and illustrated by Tobias Krejtschi. Named “Most Beautiful Book of 2013” by the German Book Art Foundation, it was translated from the German by Publishing Perspectives‘ Deputy Publisher Hannah Johnson, and tells the simple story of a curious photographer in an unnamed country who, spotting an attack in a war zone, rushes into the nearest clinic. What he sees there changes the way he looks at the world. Inspired by events in the Gaza Strip, the book “will take you to a place far from comfort and safety,” says the publisher’s blurb.

This, obviously, is not your typical picture book, and publishing it is a challenge, says Wilkins, albeit one that is entirely worthwhile.

“We try to find books that encourage children to take a journey outside their own world. Another culture, language, environment. They find commonalities with children in the world, but also realize there are differences,” says Wilkins. “I also like books that allow you to rehearse and explore emotions, which is why this is so interesting as a picture book.”

He adds, “There are often books that are visually stimulating or are a tie-in to film or TV — that is what we very often see given to children. But kids have a heart and a head….and your emotional intelligence is a drum kit you get to play with as you grow. If you don’t explore that as a child, you won’t use this as you get older.”

Wilkins, who is a regular at the Frankfurt Book Fair and serves as the Managing Editor of Publishing Perspectives’ Show Dailies at the Fair, uses the event as his single most important source for new titles. One Red Shoe caught his eye immediately.

“I attended the 2013 Frankfurt Book Fair and saw a lot of publishers that week, yet not one showed me that book. I happened to be at a drinks party at the stand in one of the European halls, when I saw the title. It had just been honored as one of the five most beautiful books of 2013 and what got me was the striking cover art: a line of barbed wire and a single red shoe with a child walking in landscape. This was not a book about fluffy bunnies or pink fairies…it was a brave piece of publishing.” Wilkins Farago has published 25 titles in its 10-year history, many of them out of the mainstream, from the surreal The Hole, a Norwegian title that had a literal hole drilled through the middle of it, to Waiting for Mummy, about a small Korean child left waiting at a tram stop in a snow storm. On the more traditional end is a collection of short stories, Between My Father and the King, by the renowned New Zealand writer, Janet Frame.

“It’s not about doing ‘good works’ or ‘obscure books’ — these books are commercially successful for us.”

“I think having a mission isn’t any less lucrative than publishing mainstream books. It’s not about doing ‘good works’ or ‘obscure books’ — these books are commercially successful for us,” says Wilkins, who knows that One Red Shoe has already sold nearly 5,000 copies in Australia since its publication in June of last year. “Australia is a country that is about 10% the size of the United States, so I am pretty pleased with that number.” The book has recently been published in the United States, where it is distributed by IPG, as well as the UK.

Eschewing digital books — “I’m still unconvinced by picture books in digital formats and while they are producing some interesting entertainments, I don’t see that digital enhances it any way,” says Wilkins — the company must contend with pricing issues abroad, where the strength of the Australian dollar has made pricing books at a rate suitable to the export market something of a challenge.

Australia is typically viewed as a secondary English-language market, a market to sell into, rather than buy from. “There is a very sophisticated market that no one takes seriously. But we tend to produce sophisticated books,” says Wilkins. “We are interested in the world in a way some homogenous markets are not. Publishers can find good value here and we have broken authors into English — Davide Calì from France — that would not likely be published in English at all. Now he has deals in both the US and UK.”

Being Australian also means looking well beyond your country’s own borders, but this has also created an opportunity for Wilkins Farago within its own sphere of influence. “We are largely interested in markets that the US and UK publishers are not — Malaysia, for instance, or South America or, even, France — and we often find that many European publishers, as much as the Asian ones, will tell you that they have often not seen any of the US or UK publishers throughout the year or at their stands in Frankfurt. There there are plenty of wonderful books in the European and Asian markets that no one will ever see, so it takes someone like us to see them.”