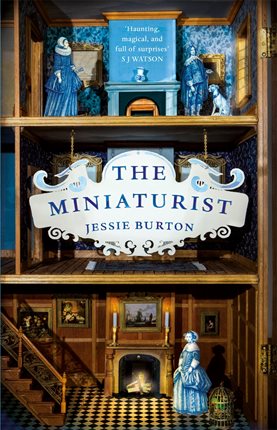 The Guardian looks back on 2014 from the perspective of a long list of British publishers, asking, what books made their year? A few of my favorites:

The book that made my year: The commercial publication of Picador’s year was The Miniaturist by Jessie Burton, which has just been crowned Waterstones book of the year and was a Sunday Times No 1 bestseller. It is a magical novel that effortlessly transports the reader to 17th-century Amsterdam, in a story of obsession, love and betrayal. We also launched first novels in the UK by two brilliant and very different writers: Emily St John Mandel, with Station Eleven, her remarkable post-apocalyptic paean to the civilising effect of art, and Zia Haider Rahman, whose In the Light of What We Know may be the most ambitious and thought-provoking novel of the year, touching on the great financial, military and migratory upheavals of our century through a story of friendship, maths and philosophy.

Our book that deserved to do better: We published a first novel, Life Drawing, by Robin Black, that united its readers in awe and admiration. I believe it is a masterpiece – a novel about two creative spirits whose narrator, Gus, is one of the most arresting women in recent fiction. Claire Messud’s review in this paper perhaps explains why it hasn’t yet broken out: “It is at once quiet and memorable. This makes it far from fashionable, and all the more to be applauded.”

I wish I’d published: I was overwhelmed by Cynan Jones’s The Dig, a novel that somehow transforms the unlikely raw material of badger-baiting and the death of a spouse into a shocking, brutal yet poetic novel. I then went back to his first novel, The Long Dry, a beautiful, melancholic meditation on farming life. To me this is the first fictional nature writing to match the qualities of its much lauded non-fiction counterparts.

The book that made my year: Over the last few years there has been a definite shift in publishing towards making books beautiful again. Two months ago we published So this Is Permanence, the lyrics and notebooks of Ian Curtis, a beautifully and lovingly assembled book put together with the help of his band, Joy Division, Jon Savage and Ian’s widow, Deborah Curtis. The book frames Ian’s handwritten lyrics – which remain some of the most powerful in the rock n’ roll canon – as a literary journey, with a visual appendix presenting the books that survived from Ian’s library: Kafka, Eliot, Ballard, Burroughs.

Our book that deserved to do better: William Atkins’s The Moor was written about by Blake Morrison in this paper as Review’s book of the week. It records a journey taken across England’s moors from Bodmin and Dartmoor to North Yorkshire and Northumberland. It is a literary history of the moors (Conan Doyle, Ted Hughes etc) but also a magnificent piece of landscape writing. Big success for the book remains tantalisingly out of reach: perhaps the paperback will connect with readers who love writers like Robert Macfarlane and books such as H Is for Hawk.

I wish I’d published: The standout book for me this year was published by an enterprising crowd-funded publisher called Unbound. Paul Kingsnorth’s The Wake is written in a shadow tongue of Anglo-Saxon and it gatecrashed the Man Booker prize longlist and won the Gordon Burn prize. The prose is mesmerising, incantatory. The antihero at the heart of the book – a delusional paranoid rebel called Buccmaster – is a compelling, awful yet noble, and sometimes comic creation. It is a novel that says as much about the Age of Farage as it does about the 11th-century Norman conquest.

The book that made my year: The book I’m most proud to have published this year is Atul Gawande’s Being Mortal. Not many books change how we think about something important, but this one does: it revolutionises our thinking around death and dying. It has already started a long overdue conversation about what really matters at the end of life, a subject that has proved so tough to confront. That Gawande gave this year’s BBC Reith lectures is testament to his compassion and clear-sightedness when it comes to medicine and how it should be used to improve our lives.

His Checklist Manifesto transformed surgery, lowering death rates and improving recovery rates, and I am certain that Being Mortal will be as significant in changing how we care for the dying.

Our book that deserved to do better: Andrew Martin is a wry, witty and authoritative social historian and an accomplished novelist. His latest book Belles & Whistles: Five Journeys Through Time on Britain’s Trains should be read by every railway-operator boss and disgruntled commuter as a reminder of how great and glamorous British rail travel used to be. And if you are stuck waiting for the signal failure to be sorted out or for a platform to become free, the book has the great virtue of being funny, entertaining, amusing and just a little nostalgic.

The book I am most proud NOT to have published (and most ashamed for my fellow publishers for signing up): Girl Online by Zoe Sugg. The great Penguin Books has an unhappy history of publishing cringeworthy books. Remember Diana’s butler Paul Burrell’s A Royal Duty? Then there was Pippa Middleton’s Celebrate. And now there’s Zoella’s ghost-written confection, cobbled together from her dispiriting blog and her superficial life spent shopping and stressing about makeup. When there are so many great YA books and writers, it is horrible that such effort should be put into churning out an offshoot of a blog that is essentially about … nothing.

The books that made my year: Paul Kingsnorth’s The Wake, and Shaun Usher’s Letters of Note. Between them, these two books – beautiful, brave and challenging in different ways – have made crowdfunding feel not just legitimate but unstoppable.

Our book that deserved to do better: Simon Napier-Bell’s Ta-ra-ra-boom-de-ay, which honestly should be by the bedside of every one who wants to do more than just listen to music. Beautifully written, it wears its considerable scholarship well.

I wish I’d published: Two books stand out: Meadowland by John Lewis-Stempel because it made me fall back in love with my own soggy, nettle-choked field; Richard Ford’s Let Me Be Frank With You, because he is a true master and they are rarer than flower meadows.