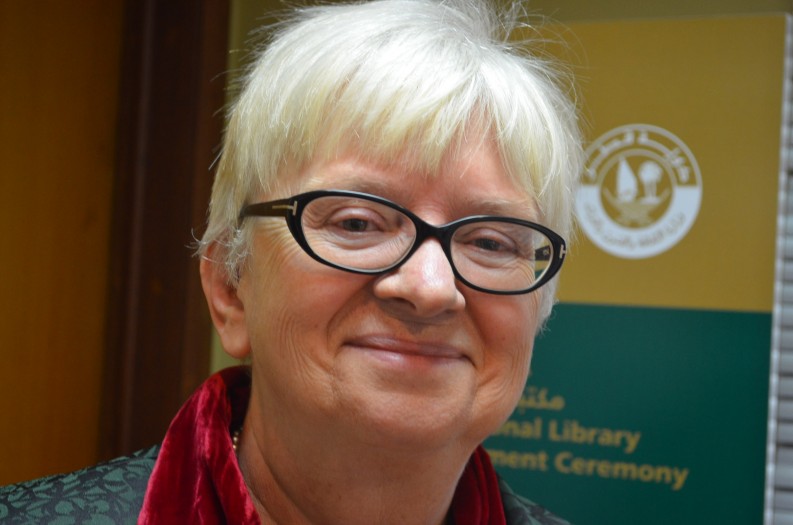 A vigorous program is in place to enhance the literary life of Qatar, including strong investment in the National Library and support for publishers. The fabulous frontage of Qatar’s National Convention Centre, where the 25th Doha International Book Fair (DIBF) runs until 17 January, is breath-taking. Its roof is supported by what seem to be the huge branches of some giant, magical tree; Doha is nothing if not a modern architect’s playground. So, if the Qatari book industry can be compared to a tree, what sort of shape is it in?

Well, undeniably, parts of it are magnificent. One branch reaches out to become the full-leafed splendor of the Qatar National Library; another is the continuing innovation and quality of the Bloomsbury Qatar Foundation (BQF); still another is DIBF itself, which sprouts new foliage every year.

The Qatar National Library (QNL) is a hugely ambitious project, one that makes visitors from austerity Britain almost embarrassed; UK libraries currently have the funding version of Dutch Elm disease and branches — if you’ll forgive the pun — are falling from the main trunk at an alarming rate. The QNL is three libraries-in-one, explains its German Director Claudia Lux. “We have a National Library that will include a heritage collection; a university and research library; and a metropolitan library for the general reader. It means that people who come to the library will find academic books and general books on the same shelf. We hope to move in later this year with some 400,000 volumes, 300,000 of which will be in English with the remainder in Arabic. The overall capacity is for 1.2 million volumes. We also have 300,000 e-books and nearly 1 million e-articles already.”

The library is under the patronage of Sheikha Mozah, effectively Qatar’s “queen” whose husband was the ruling Emir until handing over power to their son. It is taking shape opposite the QNCC and also boasts striking architecture, the customary Qatar trade mark.

Lux would not give a figure on how much it is costing, perhaps because the Gulf countries are notoriously competitive (this competition even extends to a kind of comic “Busincss Class battleground” up in the skies — last week the Gulf papers were full of stories about Qatar Airways’ double beds on its business class flights as the airline it seeks to “out-luxury” Emirates and Etihad).

The Bloomsbury Qatar Foundation, the book publishing wing of the Qatar Foundation whose aim is “to support Qatar in its transition from a carbon economy to a knowledge-based economy by unlocking human potential,” currently publishes 60 to 70 titles a year, in English and Arabic. The back office functions — production, sales, distribution — are handled through Bloomsbury UK. Director Arend Küster is particularly pleased with its Q Science division, whose online material is now accessed from 170 countries and showing a very good growth rate. The publisher is also in discussions with Egyptian ebook retailer Katobi (owned by Vodafone) and is pleased that the rendering of Arabic font into digital is all but sorted (though Amazon has still not taken the plunge, according to Küster).

But, like many in the region, he is disappointed by the lack of bookshops — if the industry is like a tree then it needs these roots. As he puts it: “How can you create a knowledge economy without bookstores?” Nasser Jarrous, the “go to” man for western publishers seeking to understand the Arab market.

International visitors to the fair this year as guests of ministry of culture included London Book Fair Director Jacks Thomas, the UK Publishers Association’s Director of Publisher Relations, Emma House and the Frankfurt Book Fair’s Vice President of Business Development for Asia Claudia Kaiser. This overseas group was organized and coordinated by Nasser Jarrous of Jarrous Press in Lebanon, the hugely respected figure who has done so much to link the Arab publishing world with the west.

One detectable shift this year was less talk about “Qatar National Vision 2030.” This is the government manifesto laid down by the previous Emir “to create a sustainable economy and advance the standard of living of its people.” It focuses on four areas of development: human, social, economic and environmental. Under human development, the manifesto reads: “the development and promotion of education among all to create a sustainable and prosperous society.” Books have a role here of course, but it seems that following the handover of power to the previous Emir’s son, Sheikh Tamim bin Hammad al-Thani in June 2013, the budget for the arts has been cut, with more money being diverted to sports and the World Cup.

At BQF and elsewhere, they are waiting to see exactly what the new Emir’s vision is, and how books fit into it. In the meantime, BQF has its own vision and that is to look beyond Qatar to the wider Arab world, and to seek out new voices and bring them to a wider public.

We began with a tree analogy; let’s end with one, or rather a little photo essay of some of the “foliage” at the 25th Doha International Book Fair. An interior view of the Convention Centre’s giant “tree branches.” The view from above the exhibition hall.