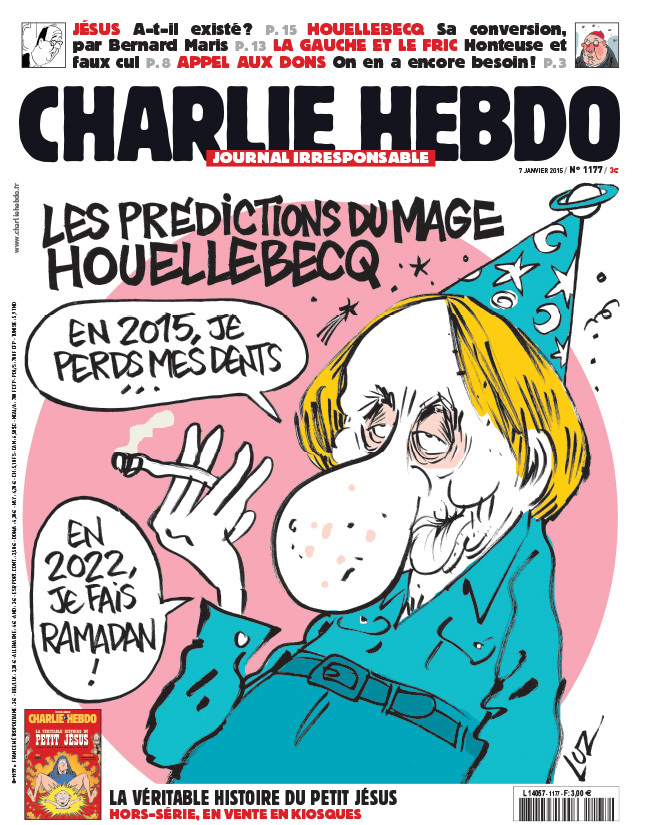 As Paris reels from the murders at Charlie Hebdo magazine, the controversial novel by Michel Houellebecq, star of the magazine’s new issue, is published. On the same day when gunmen murdered 12 people and injured many more at the Parisian satirical magazine, Charlie Hebdo, a controversial new novel by Michel Houellebecq — who graces the cover of the magazine’s current issue — hits bookstores.

In the days leading up to the end of 2014, Houellebecq’s novel, Soumission (Submission), was already making headlines when a copy was uploaded to cyberspace two weeks ago, first as a poorly copied PDF, then in EPUB and MOBI formats. According to the blog Aldus, it’s the first time in France that a pirated version of a book appears in a digitized version before the official launch. Articles proliferated to the point that a journalist colleague posted on her Facebook page that during the period before and after the release of Houellebecq’s book, she would temporarily “unfollow” all her friends who were regularly quoting extracts from the PDF.

Soumission, which Houellebecq categorized as “political fiction” in an interview with the Paris Review on January 2nd is his sixth novel and is set in 2022: far right wing politician Marine Le Pen loses the presidential election to the fictional character Mohammed Ben Abbes, a moderate Islamist and leader of a new Muslim party in France. France swiftly becomes an Islamic patriarchal society, women must leave the work force and wear a veil; there is far less liberty and more security. As with his previous books, which sparked accusations (including legal proceedings) of Islamophobia, misogyny and plagiarism, Houellebecq, who has won a number of literary prizes including the Goncourt and the Dublin IMPAC award, is once again in the midst of controversy.

Nicolas Gary, founder of ActuaLitté literary magazine, which published a long article about the pirated editions of Soumission, wrote an open letter to Houellebecq in which he said he felt “sullied” by his writing which transmits hate and fear. “You should not have stooped so low, carelessly stirring the pot filled with subjects that cultivate xenophobia.”

But in an article published in Le Monde on Monday, author and screenwriter Emmanuel Carrère, credited Houellebecq with having the same sort of visionary quality that Orwell’s 1984 and Huxley’s Brave New World had in the 20th century.

In a television interview, Houellebecq said that it was clear that religion was on the rise and not only Islam. He added that as he got older, he found atheism to be “a painful position” to maintain, echoing what he had said in the Paris Review interview — that he was no longer an atheist, but rather, an agnostic.

“My book describes the destruction of the philosophy handed down by the Enlightenment, which no longer makes sense to anyone, or to very few people. Catholicism, by contrast, is doing rather well. I would maintain that an alliance between Catholics and Muslims is possible. We’ve seen it happen before, it could happen again.”

Houellebecq provokes strong reactions — he is accused of writing bitter, angry novels, which utterly lack empathy for humankind. He has been compared to Céline — an author who can be recognized for his writing but not his ideas. It doesn’t help that physically he is a Gollum-like character who dispassionately talks and writes about desolate societies.

With Soumission, Houellebecq cannily plays into public fears; he knows how to rub salt in society’s wounds.

In Germany, which is battling a surge of Islamophobia, Sandra Kegel, writing for the newspaper FAZ described the book as “frightening.”

President François Hollande said earlier this week that he would be reading the novel because “it prompts debate,” though it is now unlikely he will find or make the time as he deals with this new crisis.

Soumission will be published by William Heinemann in the UK and FSG in the USA and is tentatively scheduled for release in September 2015; the translator is yet to be confirmed.