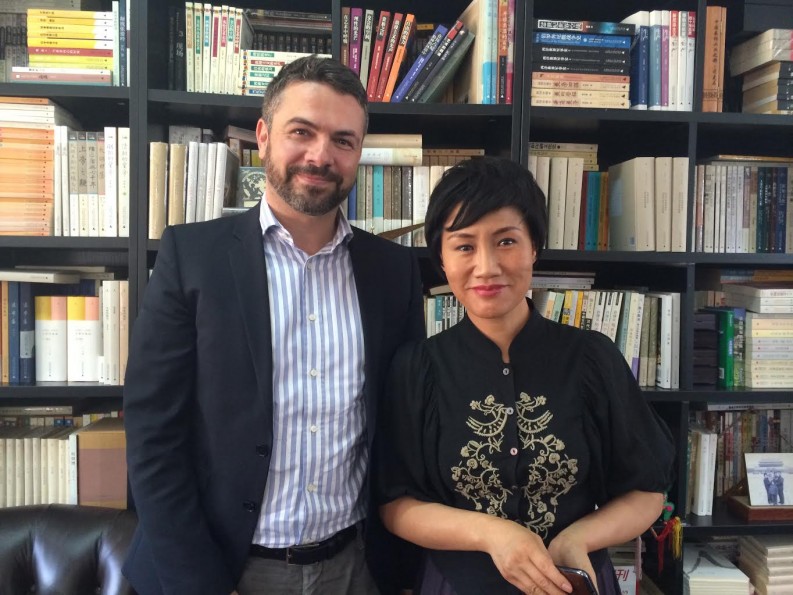 When you enter the offices of the “Imaginist“ publishing house, a different world unfolds. Outside there are huge blocks of flats, grey backyards and the dirty streets of Beijing. But once you walk through the gate, you see a stone-flagged courtyard, potted plants and a wooden deck in front of sliding doors that open to a small showroom. Even the city’s constantly challenged air seems to smell better here. Inside the tiny room, delicate pottery, wooden design furniture and beautiful books compete for your attention. And then a kind voice says: “Welcome.”

Ms. Liu Ruilin (刘瑞林) has the clear and calm voice of someone who instantly gets the attention of everybody in a room. The general manager of Beijing BBT Book Publishing Limited and editor-in-chief of Guangxi Normal University Press is an outstanding personality, admired by many in the Chinese publishing world. She manages an “in-between” publishing house — meaning one “in-between systems and in-between topics.” Although BBT (贝贝特, Bei Bei Te means “be better”) is owned by one of the state-owned publishing houses, it is operated more or less as an independent publisher — a rare phenomenon in China. Liu Ruilin was given the right to run the company in her own way.

Under Ms. Liu’s influence the company started to focus on high quality books. She treasures the value of thought, artistic quality, reflections on reality, the humanities and most of all: the values of culture. This is shown in the publishing program, which focuses mainly on history, art, life, culture, humanities and literature.

One of the key powers of Ms. Liu as a publisher is her network of great authors, including historians, artists, public intellectuals. Among them are the most famous in Greater China, like painter Chen Danqing (陈丹青), the HongKong based writer, critic and TV host Liang Wendao (梁文道) or Dr. Long Yingtai (龙应台) – the former Taiwanese Minister for Cultural Affairs. Imported and translated international authors include names like Umberto Eco, Jonathan D. Spence or the Japanese graphic designer Kenya Hara.

Her book design also sets a standard in China, as it is always exquisite, elegant and has a taste of art. There are numerous imitators — always a good sign for success — and the readers appreciate the efforts and pay higher prices. Ms. Liu builds a very successful network and audience in China, that admires her great idealism and concept of a culturally influential publishing house.

In 2010 the company decided to change its name to “Imaginist” as a new brand, replacing the old name “BBT.” Why? Ms. Liu wanted do much more than just “be better.” In China, Imaginist is called “理想国” (Li Xiang Guo), which means the “ideal country” or “utopia.” (It’s also the Chinese translation of the title of Plato’s The Republic.) As Liu Ruilin would put it: the idea behind this name is “to imagine another possibility,” and an “ideal country,” which is open-minded, shares ideals of equality and is a colorful country.

To establish a constant discussion on these topics, Liu Ruilin also began to run a cultural salon under the name “Imaginist.” Over 200 events are held each year and the company has built an event platform for her authors and for attracting new readers.

Holger Volland: You are leading a very inspiring publishing house. Not only the program but also the actual building is full of art work and beautifully crafted spaces. This is mirrored in your editorial program: You’ve told us earlier that the topics you choose are mainly discussions about change.

LIU: In our books we discuss the problems which China is facing right now. We also discuss the problems of the people, who live in this current time of transition and face totally different conditions than a few years ago. As a publishing house we are also interested in the theoretical discussion of problems.

HV: Big changes are often associated with a strong longing for traditional values and interest in the wisdom of the past. Do you see a growing interest for, let’s say, ancient Chinese writers?

LIU: Maybe we are not in that phase. Currently people are challenged by so many problems that they probably don’t have the nerve to appreciate the classical values and texts. But indeed this may happen in the future, because we need the nutrition from classical literature, music, arts. I think people can find inspiration from classical thinking. Especially in the academic world, for example, the thinking of Adam Smith, Aristotle, the Greek philosophers etc.

HV: Do people need translators from classical Chinese authors into contemporary Chinese thinking? Is that what Prof. Yu Dan for example does in her TV shows: Helping us to understand Confucius in a pop culture context?

LIU: She actually interprets a lot using her own ideas. What she did was not translating classics to modern readers but interpreting. These are two different concepts. I believe we do also need people who can do basic translation of classical text, but not necessary those who interpret them.

HV: You organize many literary events. Is a publishing house a cultural institution that has kind of a tool for a developing society?

LIU: It depends how a publisher works. A good publisher shall have this social function and can be a tool. The other thing is that even a publisher would like to be socially responsible; the macro environment here might not allow it to do so. Since there are restrictions, we need to be wise to find a way.

HV: What about the market for intelligent cultural products? Do cultural or philosophical publishers find it difficult to built a large audience for their titles in China?

LIU: To keep the balance of quality and profitability is the major art we all need to learn.

HV: The design of your printed books is especially delicate and fine. Do you already have a plan of how to transform your excellent book design into the digital world?

LIU: We only have printed books on design so far. We still don’t have any clear ideas how we can carry out the digital transformation. But it might come in the future.

HV: A friend of mine, who is a typography professor, told me his prediction that the written word will disappear in the future completely. We are becoming a more and more oral society that does not need any writing as a vessel for ideas. What is going to happen with publishers, if he is right?

LIU: I actually think we are going in that direction. But if that’s the case, I will treat characters and letters as art work. Similarly, I will treat books that consist of such characters as art works. I do already see a trend that books will be more like pieces of art that are worth being collected. The good news for me as a publisher is: there is a market for art works and we can even sell them at higher prices.

The interview was conducted during a visit of German publishers and editors in 2014, organized by the BIZ Beijing and Frankfurt book fair.