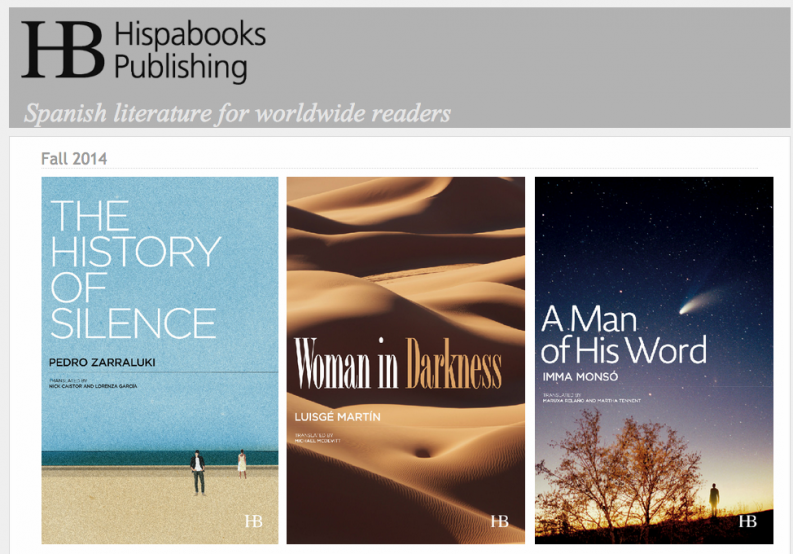 Hispabooks is offering an impressive selection of Spanish novels that speak a cosmopolitan, European language to global readers in English.

Don Quixote de la Mancha — the slim, mustachioed man created by Miguel de Cervantes in the 16th century who went mad from reading chivalresque literature — might be the first name that comes to mind when thinking about literature from the Iberian Peninsula. But Hispabooks, a young Spanish publisher based in Madrid, is trying to place new and contemporary references to global readers. The business idea is simple: publishing English translations of Spanish novels that have garnered positive reviews from Spanish critics. But not just any novel, says Gregorio Doval, founder and publishing director — they’re looking for Spanish novels that speak a cosmopolitan, European language to global readers.

“We have always been told that Spain witnessed a kind of “mini” literary boom after the end of Franco’s government and that the crisis of ethical and moral values that it fostered was channeled through literature. It was a great generation of writers, especially female writers, but their work was very different from the kind that Spanish publishers were sending to foreign markets. Their work had none of the topical themes or the local Spanish flavor that publishers from Anglo countries had always asked from Spanish publishers.”

Working on the business profile Doval saw that Spanish publishers have missed the chance export local talent abroad. He argues that big Spanish multinationals tried this before, but their efforts didn’t pay off due to a lack of commercial flexibility and a focus on short term profits. He knew from the start that becoming another local, independent publisher in Spain was not the best card to play. Instead, he decided to look abroad.

“I believe the main problem of the Spanish book industry is their failure to reach foreign markets,” he remarks. So supported on his long experience in the Spanish publishing industry and with the help of colleague Ana Perez Galvan, he decided to take the risk and try something with this “glocal” offer.

Both Doval and Perez have graduate studies in media and ample experience in the Spanish book sector. Doval has postgraduate studies in sociology and has built himself a 35-year career as a fiction and nonfiction writer, screenwriter, program manager and editorial director. Pérez, on the other hand, has a master’s degree in publishing and 15 years of experience in the editorial and rights departments at Spanish fiction and nonfiction publishers. Their decision to focus on global rather than on local markets makes sense and is based on strong statistics showing that local book demand has plunged since 2008 as an outgrowth of the global financial crisis. According to the Spanish Ministry of Culture’s El Sector del Libro 2012-1014 — an industry-wide report that gathers data from nearly all book-related associations in Spain — book sales in the local market plunged 10.9% and reached 2.4471 million Euros in 2012, the lowest number in thirteen years, and the number of copies sold in the same market dropped to 170.24 million, 15% less than in 2011.

Selecting Books from the Best

Special attention is also given to translators, who are in charge of the difficult task of translating the “author’s voice” for a global readership. “We try to force our work a little and avoid doing neutral translations. These are perhaps more suited to a general reader but their downside is that they betray the author’s voice. I have seen former translations of Spanish literature where some of the cultural references had been omitted. These small details allow readers to digest more easily the book.”

In order to provide readers with quality translations, Hispabooks reached out to some of the best Spanish-English translators in the market, some with bestselling Spanish authors on their resumes, including Javier Maria’s British translator, Margaret Jull Costa — who translated Marcos Giralt’s Paris, and known for her translations of Nobel laureate José Saramago — and Nick Caistor, a winner of the Valle Inclán translation Prize whose resume includes Paulo Coelho and Manuel Vazquez Montalban, and who translated Lorenzo Silva’s La flaqueza del bolchevique with Isabelle Kaufeler).

Several other translators are rising stars in the translation scene, such as Thomas Bunstead, mentee of the British Centre for Literary Translation, who translated Anton Mallick quiere ser feliz by Nicolás Casariego, and Oliver Brock, who translated La vida de hotel by Javier Montes, in collaboration with Lorna Scott Fox. Doval draws on his expertise on Spanish proverbs and idiomatic expressions to provide key feedback to translators on local language intricacies.

Being global means more than just shipping print copies abroad. To this effort Hispabooks is doing a serious job in covering a wide a market as possible with the help of digital and print presence in major e-retailers (Kobo, Amazon, Barnes & Noble and Waterstones, among others), wholesalers in Anglophone countries and also public libraries. Harnessing the growing popularity of subscription ebook services (such as Spanish player Nubico), they have also made their titles available at 24symbols.

The focus on literature from Spain means that Latin American literature is left out. Doval insists that their focus remains on Spain’s tradition and identity since he believes this helps the company focus on exploring foreign markets as far as Philippines, with whom Spain shares a common history and has English as one of its official languages (the nation was was named in honor of Philip II during Spain’s colonization odyssey and governed by the US during the first half of the 20th century).

With a struggling local market for authors who receive less from writing and translation than before (he, as a writer, can testify), Doval argues that Hispabooks works more as a close-knit community with local writers and agents that wants to give writers new horizons abroad. “It is neither a chauvinistic nor a nationalist ambition. We simply think that Spain has a lot to offer and that we don’t want to mix it with others.”

Despite its short history, Hispabooks has already drawn some conclusions from the sales of their titles. “We’ve noticed that in markets where translated foreign literature is popular, quality trumps origin and those readers who acknowledge this will buy your books. We’ve also seen that literary prizes and renowned translators play a big part in selling, as well as chance events,” Doval says.

Future markets to explore include Southeast Asia and India, where the biggest hurdles are distribution costs and selling prices. “These markets have different living standards and this leaves small margins. We might have to look for local companies who know the internal book market.”

New distribution deals should help: starting this spring, Central Books will be distributing Hispabooks in the UK and Ireland, and Consortium Book Sales & Distribution will distribute in North America.

Another obstacle is thwarting deep-rooted global conceptions about what Spain and Spanish people are: Hispabooks is taking up to the challenge of convincing global readers that Spain — huddled between the Anglo and the Mediterranean worlds — has just as cosmopolitan and cerebral a literary culture as other major nations in Europe, such as France, Germany and the UK.

“Readers expect to find rhythm, passion and adventure when they read a Spanish author, and that is what we try to challenge. Spain also has world-class introspective literature, more European, with a taste for language and for thoughtful characters.”