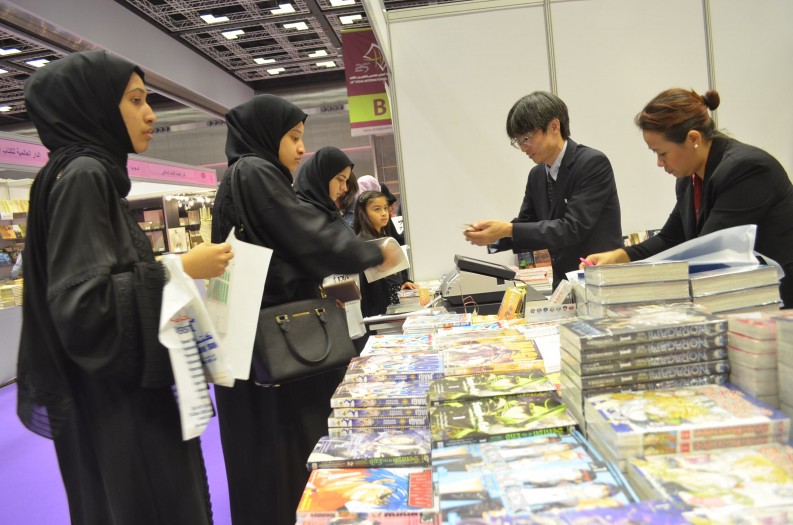 Though the Doha International Book Fair opened under the cloud of the killings in France, it proved interest in reading is growing in the oil rich country. The book fair announces itself in the gloom of a sandstorm.

Doha, Qatar: News of the attack on the French satirical magazine Charlie Hebdo reached Qatar just a few hours before the opening of the 25th Doha International Book Fair (DIBF) last week and inevitably cast a shadow over the celebrations. Qatar’s Minister of Culture, Dr. Hamad Bin Abdulaziz Al-Kawari, who was among senior government officials and foreign ambassadors attending, was particularly affected.

“For me personally I am very sad. France means a lot to me — I was our ambassador there for five years. This tragedy helps the enemies of Arabs in Europe and I hope France will overcome this — I am aware of the strong belief in the cohabitation of different cultures in France, and the unity of the whole Arab world is behind France and its people.” He said that such events can lead to people closing off from Arab countries, not wanting to visit them. “This problem is in the minds of people and the best way to solve that is through education and culture. The people who perpetrate these acts have a sickness in the mind and that is where we have to start. Culture is the best way to tackle this — that is the role of culture and books, which is why this fair is so important. We are so pleased to have France here with us.”

The French ambassador, Eric Chevallier, received many messages of condolence on the exhibition floor, but was not giving briefings — all official communication was being handled out of Paris.

The ambassadors of Ecuador, Iran, Japan, Cameroon and Saudi Arabia — to name just a few — were all at the opening too, underlining the fact that the Doha International Book Fair is very much a red letter event in Qatar’s cultural calendar, even more so in this its 25th edition. Asked about the sad events in Paris, the Saudi ambassador Abdullah Al Aifan said: “King Abdullah warned three months ago that this terror would spread, and he called the ambassadors together to say this. I read many books on international affairs, to help us through this difficult time. It is not easy to be optimistic, but I think we can find a way through this dark period.”

What of the fair itself this year? Director Abdullah Al-Ansari said there were 506 publishers here, from 29 countries, with Malaysia among the new nationalities represented. The show runs until 17 January and is in a new venue, the fabulous Qatar National Convention Centre — architecturally fabulous, that is, but a little away from the city centre, and thus harder to reach. It is also surrounded, as with so much of pre-World Cup Doha at the moment, by construction sites for new roads, new buildings, new railways. The city is enveloped in a fury of preparation for 2022, for what will surely be the biggest event it will ever host. Seemingly everywhere you look there are clusters of migrant workers, necks wrapped in scarves to protect from sand storms at this time of the year, and from the crushing heat in the summer. Busy trade in manga on the Kinokuniya stand.

So the fair’s relative isolation means it felt a little quieter than other book fairs in the region, notably Sharjah, though last Friday evening was very busy. Some pockets were doing very well indeed, notably Kinokuniya where manga was flying. Tomishi Uramoto, Assistant Manager in the Operations Department at the company’s giant Dubai store, explained: “Manga is very popular here now. It started on TV around two years ago, which laid the groundwork, and now people want to see the original.”

Among those buying “how to draw” manga characters books was Mariam, a local part-time business administration student. “They have such a good range here. There is a manga store in Doha — Tribe — but they don’t have so many titles. I make special trips to Dubai, just to go to Kinokuniya. I wish they would open here.”

That sense of the potential in Qatar comes across strongly. A young engineer, taking a break from buying books with his family in one of the new hall’s coffee bars, said: “There are so many international publishers here — it is a good opportunity to find titles that you cannot find elsewhere. In Qatar people only experience local culture — here you can experience other voices. There are Japanese and Korean stands here — it gives other countries a chance to express themselves.”

He had bought some cookery books, loading them into one of the branded wheelie trolleys that are such a familiar sight in book fairs in the Gulf. Like its counterparts in Sharjah and Abu Dhabi, the DIBF is a giant bookshop, compensating in these 10 days for the lack of bookshops elsewhere in Doha.

The potential here is evident to Jon Malinowski of Combined Book Exhibit, too. He was showing titles from a wide range of US and UK publishers and had many customers seeking to buy titles. “But unfortunately, we don’t have a retail partner here as we do in the UAE, so we are not set up to sell yet. There are various issues with the time it takes retailers to get books checked by the authorities.”

This is a familiar refrain from western publishers seeking to do business in Qatar, and there are many stories about the single individual (a single individual!) tasked with checking imported books. There is even a bookseller in Riyadh who says it is easier to import books into Saudi Arabia than it is export books from Saudi to Qatar. Yet this shouldn’t detract from the fact that Qatar has begun its book journey, if you like, one that is slowly moving in the right direction.

Seasoned observers of the book industry in the Gulf say the DIBF is like Sharjah ten years ago. The fair does not have a full professional program attached as yet — though some western authors, like Justin Marozzi, author of Baghdad: City of Peace, City of Blood, did appear this year — and nor does it have the rights match-making sessions that Sharjah has championed.

Yet slowly the right moves are being made. The Minister of Culture, Dr. Kawari, is a book man at heart — he has a non-fiction title coming out in the spring, The Idea that Creates — and he is someone willing to listen to the requests made by the UK Publishers Association and others for ways to speed up trade to mutual benefit.

Given the importance of books in breaking down boundaries and fostering understanding — issues that couldn’t be important during this sad fortnight — then that is surely cause to celebrate, and one that puts any concerns over organizational matters into perspective.