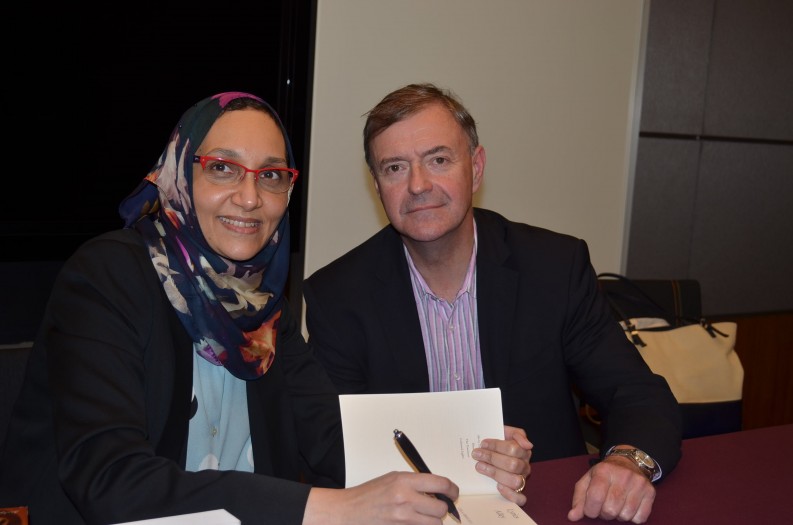 The discussion of the murders in Paris includes those who disagree with Charlie Hebdo’s agenda even as they respect the cartoonists right to expression.

One of the most difficult of stances to take following the sad events in France is to question the decision of Charlie Hebdo to publish the cartoons in the first place. To do so can be interpreted as supporting the violence that occurred. But an interesting piece in the International New York Times asked whether the murdered staff at the magazine were “free speech martyrs” or “provocateurs whose aggressive mockery of Islam sometimes amounted to xenophobia and racism.”

At a talk at the Doha International Book Fair last week, chaired by former Random House UK International Sales Director Simon Littlewood, Sudanese/Egyptian author Leila Aboulela (Minaret, Lyrics Alley) touched on this very sensitive area. Asked about the tragedy, she said that she deplored the barbarous acts which were counter to the spirt of Islam and noted that the Prophet Muhammad himself “received much provocation in his life but always reacted with tolerance and patience. We should follow his example.”

But then she added: “However, the people who drew these cartoons were ignorant. The Prophet is someone all human beings should respect. He is there for all of us.”

The publication of the cartoons raises all sorts of sensitive, very difficult questions over what is and isn’t acceptable. Should the magazine have had a Muslim advisor, someone to whom material could be shown so that they could get a “Yes, that will be OK” or “No, if you publish that, there could be trouble”? Publishers use lawyers all the time like this. Would the world have been a worse place if Charlie Hebdo had not run the cartoons? It is, after all, only a magazine. Was there nothing else that week to satirize? Just because something is offensive, does that always make it justifiable? At what point does publication become deliberately provocative, unhelpful, a danger to public safety? Or is personal liberty, and perhaps public safety, too, threatened at some point in the future (through the rise of militant Islam) by refusing to publish such cartoons? Were the cartoons just gratuitous, like using the N-word to someone of color or dumping garbage on a neighbor’s lawn? Very difficult questions.

The article mentioned a piece by cartoonist Jacob Canfield posted on the site The Hooded Utilitarian. In it he writes of Charlie Hebdo:” Its staff is white. Its cartoons often represent a certain, virulently racist brand of French xenophobia. While they generously claim to attack everyone equally, the cartoons they publish are intentionally anti-Islam, and frequently sexist and homophobic…The white editorial staff was interested in provoking France’s incredibly marginalized, often attacked, Muslim immigrant community.”

Follow the links on the site and you soon come to a posting by a black French woman who writes: “My prayers go out to the victims of this shooting. As an artist, a person who works in magazines, a human, and as a French woman I feel their pain. MAIS JE NE SUIS PAS CHARLIE. I will not stand for this magazine. I will not celebrate the privilege of ‘free speech’ to be a disguise for hate.”

Meanwhile, the ongoing meme of “JE SUIS CHARLIE” may itself be somewhat facile and disingenuous. While it is entirely understandable that tens of millions of people have rallied around the slogan in a show of sympathy, the fact is that the slain cartoonists and editors said and did things that 99.99% of most people now identifying them would have never ever risked to do themselves.

Yes, the French are comfortable arguing about politics and religion in a way that many other cultures would find uncouth or even offensive. They can do so and still remain friendly, even as deep reservations about opposing views remain. This often extends into the public debate, for better and — as in this case — for worse. And if anyone has the right to adopt the slogan, the French themselves do.

The murdered knew the risks and chose the path knowing it would make them targets. They embraced the role of provocation and exercised the full extent of their freedom of expression. Call it courage, call it callous, call it hubris — it is perhaps all of those — and it ended in their tragic, horrifying deaths. But can most or even some of those who have adopted the name CHARLIE as a slogan of sympathy say the same of themselves? Is is not perhaps even a bit of thoughtless to claim the same status for oneself when one has no claim to it in their own lives?

Against the outpouring of sympathy for the victims and their families, it may be unsettling to read these alternative views. But they form part of the debate that will surely continue as people ask “why?” Hopefully, airing such alternative views will contribute to greater understanding on all sides.