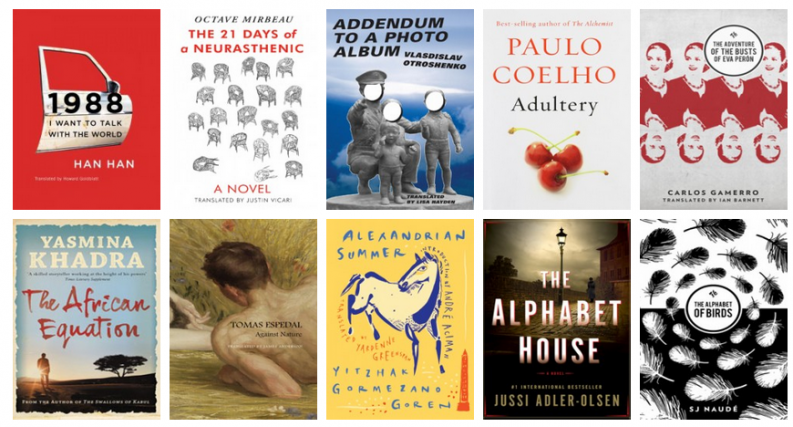 Typographical Era has produced a visual guide to 2015’s translated fiction, while Three Percent has updated its database and PEN UK surveyed its publishers.

The web site Typographical Era has produced a handy visual guide to translated fiction that will be published in 2015. Call it your “what should I read next by people that talk funny” cheat sheet.

According to the editors:

The guide now (hopefully) contains only translations of titles that are appearing in English for the very first time in 2015. No retranslations and no republications unless they are new versions of extended or previously censored works. We’ve probably missed removing a few, so please do clue us in if you spot any straggling offenders in there.

Looking to read a crime novel or some historical fiction? We’ve implemented our first pass at genre filtering! Check it out and let us know what you think.
We launched earlier in the week with roughly 150 books being displayed. Now, even with some deletions, we’re sitting at just shy of 225 titles from 32 different originating languages!

It should give any books editor (or reader) an easy way to cherry pick a few titles for review…c’mon guys and gals, you know you can do it!

Of course, for our dollar, we still rely a great deal on jolly-good-fellow Chad W. Post at Three Percent who has been compiling a translation database for several years now. If any one is the Yoda of translations in the US, it is Chad (albeit a Yoda who swears a lot) and he updated the list a recently as January 12.

And not to be missed, English PEN has also put out a list of highlights of translated works coming from UK publishers as well. This includes listings from a wide range of major, mid-sized, and smaller publishers — from Picador to Serpent’s Tail, from Pushkin Press to Peirene Press.