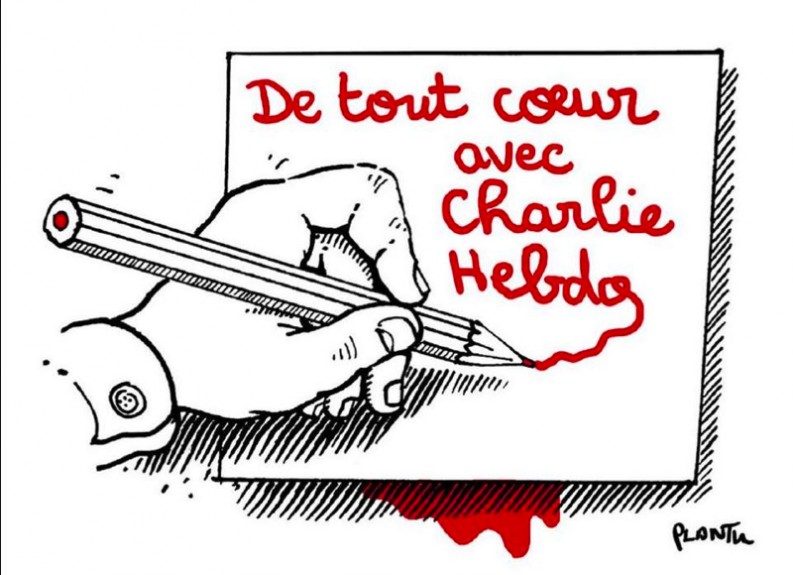 A cartoon by Plantu

Since 2006, Charlie Hebdo journalists had been intent on maintaining the magazine’s freedom of expression concerning Islam and tragically died for it.

The horrifying attack took place yesterday, Wednesday, January 7 at the offices of Paris-based satirical weekly magazine Charlie Hebdo: two masked, armed men killed twelve people, including cartoonist Charb, the director of the publication, and celebrated political cartoonists Cabu, Tignous and Wolinski, wiping out the majority of the staff, which was holding an editorial meeting at the time of the attack. As the men fled, they shouted, “The prophet has been avenged,” and “We killed Charlie Hebdo,” a statement that is as chilling as it is true. Two of the cartoonists, Cabu and Wolinski were in their late 70s and early 80s, and had collaborated in the 1960s with the magazine Hara-Kiri, which was the inspiration for Charlie Hebdo.

The left-wing paper, founded in 1970, had ceased publication in the 1980s due to lack of funds, and was resuscitated in 1992. It has joyfully and irreverently published articles, occasionally investigative, and satirical cartoons on subjects such as the far right, politics, sects, and religious fundamentalism. Since 2006, Charlie Hebdo journalists, united by their anticlerical beliefs, had been intent on maintaining the magazine’s freedom of expression concerning radical Islam, beginning with the publication of the caricatures of the Prophet Mohammed that had first appeared in the Danish paper Jyllands-Posten.

In 2011 the offices were set on fire by a Molotov cocktail on the day the magazine was to publish an edition “guest edited” by Mohammed to celebrate the victory of the Ennahda Islamist party in Tunisia. In 2012 the Charlie Hebdo offices were under police protection as the magazine was to yet again print a representation of Mohammed. At the time, Riss, one of Charlie Hebdo’s illustrators and editors told Le Monde, “We don’t want to be afraid, but rather, to have fun, to take life lightly. We are just trying to create something funny. Humor is a language that fundamentalists don’t understand. They base everything on fear.”

Le Monde, yesterday, revived an interview with Charb, the publication’s director, who said that he had no intention of putting down his weapon—his pen—“perhaps it’s a bit pompous to say this but I’d prefer to die standing up than to live kneeling.”