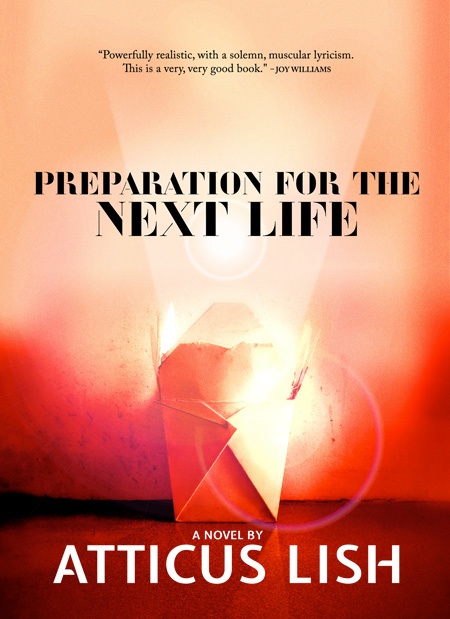 In the superb novel “Preparation for the Next Life” (Tyrant Books), Atticus Lish has re-imagined the contemporary American immigration story for our times. It’s been a long time since I’ve read a book that I loved quite this much; so much that I wanted to write about it, to tell people, “You’ve got to read this book!”

It’s a book that grabbed me from its first paragraphs:

“She came by way of Archer, Bridgeport, Nanuet, worked off 95 in jeans and a denim jacket, carrying a plastic bag and shower shoes, a phone number, waiting beneath an underpass, the potato chips long gone, lightheaded.

They picked her up on the highway by a plain white shed, a sign for army-navy, tires in the trees. A Caravan pulled up with a Monkey King on the dash and she got in. The men took her to a Motel 8 and put her in a room with half a dozen other women from Fookien and a liter of orange soda. She listened to the trucks coming in all night and the AC running.”

And didn’t let go all the way through to the end.

The book, Preparation for the Next Life by Atticus Lish (Tyrant Books), tells the unlikely love story of Skinner, an Iraq War veteran, and an undocumented woman, Zou Lei, an ethnic Uighur from Northwest China. And an extraordinary, touching, and painfully believable love story it is.

But since I hate it when reviews reveal too much about the plot, I’d like to focus instead on the book’s other major character – New York City itself. Not the city of the TV show Girls or of countless other novels and films set in varying parts of Manhattan, but set instead in Flushing, Queens – home to immigrants from around the world, all busy remaking their lives, selling DVDs on the subway or working in lousy restaurants, living in crappy housing and trying in any number of ways to get a foothold (legal or otherwise) in the city.

The novel of Jewish immigrants trying to make it on the Lower East Side has been reborn in Preparation for the Next Life as a multicultural world of new immigrants. And in it, Lish gives us a vision of the city that is rarely, if ever, seen in literature. If, as Joan Didion wrote, “New York was no mere city. It was instead an infinitely romantic notion, the mysterious nexus of all love and money and power, the shining and perishable dream itself,” Lish shows us the city as it is now, in all its gritty, noisy, hustling reality:

“The garbage on the street had a peculiar smell. In the windows, he saw red roast pork on steel hooks. A mother was squatting helping a boy urinate in the gutter. When he flipped his empty can into the garbage, an immigrant in flowered sleeve guards came behind him and picked it up with tongs. He heard a chanting, which was all their voices overlapping. The women wore black leather jackets and spike-heeled boots with buckles and fringe. One of them looked at him directly and she had eyeliner and a mane of dyed reddish hair and then he lost her in the crowd.”

Along with visions of haunting beauty, as Skinner leads Zou Lei to a rise where she can see the city as a whole:

“In it, she beheld what was possible. The city was uncontained. It covered a massive area and graded out into the world. There was no definite end at the horizon. There were more buildings, miles of them covering the earth on into the distance. She saw the areas of trees, the shade of wood, the intricate fuzziness of the branches from this distance in among the houses. The highways – massive, industrial, and lonely – were to her left. To her right, there seemed to be still another city and then, past it, the skyline of Manhattan, which she identified by the Empire State Building, which she could cover with the tip of her finger. And she had a view between tenement rooftops of one of the suspension bridges that connected Manhattan to the other boroughs. It was ten cities all together. She saw things from this elevation that were normally hidden from her. In the direction of the water to the north, she saw a green dome, which had to be a mosque. She saw the spire next to it among the confused rooftops, fire escapes, and water towers. It was blocked and revealed again by the centipede of a subway pulling by. There were splinters of metal embedded in the blue stratosphere to the south: planes coming head on. Passing over her and Skinner, they elongated and became commercial jets, tracking towards the airport on the water. She saw the complicated shape of the shoreline, the lack of contrast between the brown city and the water, as if it were all part of one thing, which it was, the geography of the earth, which you could move across as you lived.”

A love story for the 21st century. A vision of American rebirth. A novel with a singular sense of place, and a prose style of a poetic precision unlike any I’ve ever read.

It is truly wonderful. You’ve got to read this book.