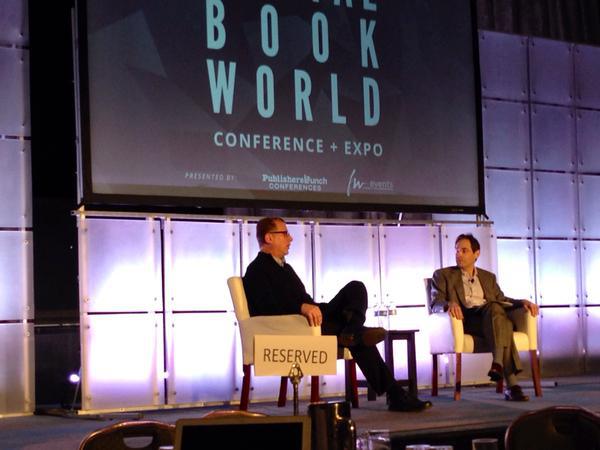 On Thursday at the Digital Book World conference in New York, Keith Moerer, Director of Apple’s iBookstore, was interviewed by Michael Cader of Publishers Lunch.

The following is an edited transcript of their conversation, sometimes paraphrased for clarity:

Michael Cader: Five years ago on the first Digital Book World, Day Two, we live streamed the launch of the iPad and iBookstore. A lot has happened in five years. How far have you come and what is the trajectory?

Keith Moerer: In April 2010 Apple launched the iBookstore in the US only. Today we are in 51 countries and have managers who operate those stores to keep them local. We have now passed an important milestone: Apple customers have downloaded one billion books globally.

Apple’s iPhone 6 and 6+ are are great for reading. IBooks is also preinstalled on all new devices, and as a result, since September we have averaged one million new customers per week.

MC: Can you tell that the larger form factor of the phone is leading to people reading more?

KM: We don’t track reading behavior, but we do see that more book sales are coming from the phone, as well as continuing from the iPad.

MC: Apple has a different approach to books and authors than other players in the ecosystem…

KM: I think it is in Apple’s DNA to support creative professionals — from musicians to filmmakers — and that carries over to all our media businesses. In the case of books, we are constantly working with authors — from bestsellers to debut authors to mid-list authors — and constantly looking for ways we can support authors. Whether an author chooses to self-publish or work with a traditional author, our revenue split of 70/30 is the same for all.

MC: How do the team at Apple work to create merchandizing opportunities?

We accept no co-op or pay-to-play. The best way to make first contact at iBooks is to send me an email, and I will make sure it gets to the right person and they get back to you: kmoerer@apple.com.

MC: You are very good at selling books on the first screen. What do you do to drive people to further discovery?

KM: We see a lot of sales coming from our category pages. We use social media, email, Facebook…we do indie author events at our Apple retail stores. We do Twitter chats. We do a variety of things within the iBookstore and are contacting people through media and social events.

MC: Are there areas where your store is outperforming competitors?

KM: Movie tie-ins sell well. We have a robust business in the iTunes movie store, so we do a lot to promote movie tie-ins. Movies typically come out on iTunes about 90 days after theatrical release, so we do a lot to promote those tie-ins. Over the last 18 months we have done a lot to promote genre fiction, romance, mysteries and thrillers. Non-fiction has always been an area of strength. Biographies and memoirs that have a pop culture tie-in, health, business and finance; though it has been slow, we are starting to see momentum children’s.

MC: Non-fiction and children’s are areas where others have struggled…

Growth is slower than we would like, but using the iTunes music store — jazz and classical were among the slowest fans to move to digital, but we have see them converting. We think we’ll see a similar progression with illustrated and children’s books. Yes, it may be slower, but there is no question there will be some progression in the move toward digital.

MC: Is this a change of the habits of readers or of the creators to make more interesting product as they master the tools to create them?

KM: Frankly, I don’t think we’re there with illustrated and children’s books, but we are improving the experiences. It is going to take time and we are committed to helping those readers have a great experience.

MC: Where are you with EPUB3?

KM: We are fully supportive of EPUB3. We are seeing publishers implement it more, some more aggressively than others.

MC: The conversation of the moment is whether or not we have hit a digital pause of plateau. Or is it growing in ways we have not seen before ? Where do you see the larger landscape going?

KM: The slowing growth overall is not unexpected as it is something we have see in other digital businesses. What I am happy with is our place in it. What we are focused on is where we are growing.

MC: What are the opportunities outside the U.S. market?

KM: UK, Germany and France are the biggest markets abroad. Throughout other parts of Europe and Eastern Europe, cumulatively no one market is that large, but cumulatively they are growing faster, and are the third largest market cumulatively in the world. Our fastest growing market is Japan, but that is largely Japanese-language content, with some English content. Latin America has been slower to take off, but we are starting to see some momentum. Canada and Australia are also significant.

MC: What about foreign publishers selling into the US?

KM: French publishers selling into the Canadian store is very successful. We are also starting to see some Spanish-language content sell into the US.

MC: Apple has been a big player in schools for years. Is there anything relevant about your experiences there for book publishers?

KM: Apple is widely used in education settings. It has been part of the mission to work with educators, we do have a digital textbook business that is small but growing. When I look at our business and think about education, I think about those trade bookstores that are used in a classroom setting or nonfiction books used in history classes for example. That is a big opportunity, and we haven’t scratched the surface of that. There will be opportunities for pushing into education.

MC: What about iBooks Author? Are things happening on that platform?

KM: IBooks author was initially designed for classroom textbooks, but it is being used additionally by publishers in the trade space. A good example would be Getty, the photographic archive. They do a yearbook of great photography and they do that every year and we distribute it for free. Movie studios and TV networks would use it to create books to promote movies or TV tie-in books that they would distribute for free as a form of promotion. Also, educators are using ibooks author to create proprietary classroom materials.

MC: What about self-published authors? Where are you with that now?

KM: Indie publishing is one of our biggest growth areas. There has been a bigger focus on growing our indie author business. We work directly with many self-published authors in a growing number, we work with many people like Smashwords and authors who don’t necessarily want a direct relationship.

MC: Self-published authors have been very innovative about pricing and generosity. Do you have any restrictions?

KM: We have not restrictions on authors giving books away for free. Any author who wants to make a book for free can, we think distributing free content is a great way to possibly acquire a new customer. We, of course, want to turn them into a paying customer.