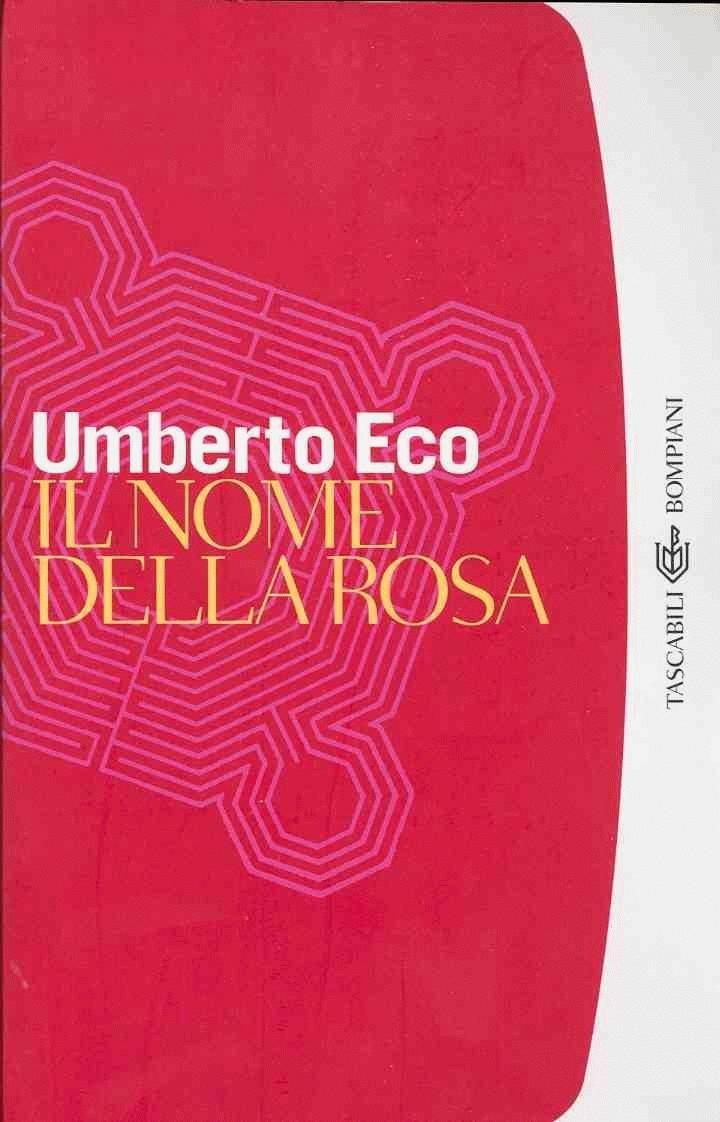 Umberto Eco’s The Name of the Rose celebrates 30 years in translation this year — but still confounds even the most erudite readers. Given the recent rash of you-couldn’t-have-predicted-this-in-a-million-years best-sellers from abroad (most notably Capital in the Twenty-First Century but also Karl Ove Knausgaard’s My Struggle), we’ve tended to become a bit immune to such “surprise” hits from overseas. After all, Cambridge Don Stephen Hawking’s A Brief History of Time was a massive bestseller, too, as far back as the late-1980s—though the Foreword from then-superstar Carl Sagan must have helped.

But do you personally know anyone who has actually read these books cover-to-cover? Not too many people, I suspect.

Which makes the success of Umberto Eco’s The Name of the Rose, celebrating 30 years in translation this year, even more remarkable. Sure, it had been a success in Europe, but the year was 1980 and the world was a lot bigger then — and communication was no mere email away.

And the craziest thing about this maddening book: people not only bought it, but read it — and tried to “understand” it. It produced, if not a cottage industry, exactly, some excellent ancillary material, such as the indispensable The Key to “The Name of The Rose”: Including Translations of All Non-English Passages (Ann Arbor: U. Michigan Press, 1999), and a nearly X-rated Frano-German movie version featuring a panoply of stars such as Sean Connery, F. Murray Abraham, a very young Christian Slater, a very old Bill Hickey, Ron Perlman, and Michael Lonsdale (who recently reprised his role as a monk in Of Gods And Men). Perhaps most importantly it also gave birth to Eco’s own delightful 84-page PostScript to The Name of The Rose.

M.D. Herter-Norton once wrote that “A translator must do his very best — and then apologize for doing it at all.” That caveat duly noted, Umberto Eco had “The Dean of Italian Translators” to help make this insane book a success: William Weaver’s English-translation is surely one of the best examples of losing nothing in translation.

Still, in fairness to Weaver, there’s much of the book — all 500 pages of it — that is not translated, or even footnoted. And why wait for the “book” itself? In his completely fictive (and entertaining) Preface to the novel proper (entitled, “Naturally, A Manuscript”), Eco gives us:

And on the two occasions footnotes are provided in that preface, one is completely in Latin, the other in French.

Who would read such a book? And why? As for the “Why”: The easy answer from a Professor of Literature I admire is that book is (and I guess I am obliged to state here: “spoiler alert”): “It’s essentially Sherlock Holmes in a monastery—with a sex-scene.” He’s not totally wrong—but that’s only part of the book. A very small part. Eco, who is a bona-fide genius but also a show-off of the worst James-Joyce-wanna-be-sort, was also, it should be remembered, a debut novelist: all his previous books had been on Semiotics (the study of signs), literary theory and criticism, and other academic treatises—and, oddly, a couple of children’s books.

Worse (from a publisher and editor’s point of view), Eco purposefully made the first 100 pages of the book particularly difficult.

“My friends and editors suggested I abbreviate the first hundred pages, which they found very difficult and demanding. Without thinking twice, I refused, because, as I insisted, if somebody wanted to enter the abbey and live there for seven days, he had to accept the abbey’s own pace. If he could not, he would never manage to read the whole book. Therefore those first hundred pages are like a penance or initiation, and if someone does not like them, so much the worse for him. He can stay at the foot of the mountain.” (Eco, Post-Script to The Name of the Rose, 1984, pp. 520).

Fine and good, all that, but not even half-way up that mountain of 100-pages is this babel:

“Penitenziagite! Watch out for the draco who cometh in futurum to gnaw your anima! Death is super nos! Pray the Santo Pater come to liberar nos a malo and all our sin! Ha ha, you like this negromanzia de Domini Nostri Jesu Christi! Et anco jois m’es dols e plazer m’es dolors…. Cave el diabolo! Semper lying in wait for me in some angulum to snap at my heels. But Salvatore is not stupidus! Bonum monasterium, and aquí refectorium and pray to dominum nostrum. And the resto is not worth merda. Amen. No?”

This is Eco at his most Joycean — make that most Finnegans Wake — and unless you have a degree in Romance Languages, good luck making sense of any of that.

As for “Who” would read this book: My father, who is the smartest man I’ve met, was undeterred by this book. He would never allow cable TV in his house (and still doesn’t), but must have shelled out a couple of months’ salary to buy the full-blown, twenty-one volume Encyclopedia Brittanica, along with the ten volume Annals of America, but most importantly, the Seven-Language Dictionary (in three over-sized volumes, with the obligatory magnifying glass).

He regularly worked double-digit hours in his bakery six days a week, but when it was time to read The Name of the Rose, he sat propped up in bed, reading glasses on the tip of his nose and at least six volumes of the Encyclopedia around him and on top of my sleeping mother as a type of blanket. Once, when walking by their bedroom I heard him mutter, “Can’t this guy write one page without a word I don’t have to look up?!”

And at the bakery my uncles, who shared my father’s penchant for late night reading, also discussed the difficulty of the novel — and all were relieved when the movie came out: “I can finally see the place he’s describing!,” my uncle Skip announced.

If the words themselves weren’t enough to deter an audience, the references should have turned away an array of readers: here’s three graphs from page 53:

Celestine V was succeeded by Boniface VIII, and this Pope promptly demonstrated scant indulgence for Spirituals and Fraticelli in general: in the last years of the dying century he signed a bull, Firma cautela, in which with one stroke he condemned bizochi, vagabond mendicants who roamed about at the far edge of the Franciscan order, and the Spirituals themselves, who had left the life of the order and retired to a hermitage.

After the death of Boniface VIII, the Spirituals tried to obtain from certain of his successors, among them Clement V, permission to leave the order peaceably. I believe they would have succeeded, but the advent of John XXII robbed them of all hope. When he was elected in 1316, he wrote to the King of Sicily telling him to expel those monks from his lands, where many had taken refuge; and John had Angelus Clarenus and the Spirituals of Provence put in chains.

All cannot have proceeded smoothly, and many in the curia resisted. The fact is that Ubertino and Clarenus managed to obtain permission to leave the order, and the former was received by the Benedictines, the latter by the Celestinians. But for those who continued to lead their free life John was merciless, and he had them persecuted by the Inquisition, and many were burned at the stake.

Unless you are a medievalist with a working knowledge of the politics of the papacy, the above is almost as impenetrable as the Abbey’s labyrinthine library.

And still people bought — and read — and struggled with this book. Eco himself has said that the book is “simply” a “Whodunit?” and that is, again, a big part of its appeal: who is killing these poor monks?

A more sane reader might answer, “Who cares? I can’t read Latin [which, get ready for this, is the language of the final lines of the book], and don’t know anything about 14th-century Italian Church politics.”

Still, millions and millions read on.

And ultimately the book does not disappoint. Indeed, it dazzles. If ever there was a tour de force performance by a first-time novelist who created a literary and popular hit—make that a “craze,” given that the book spawned not only a movie, but a board- and video-game—this was it.

And that was it: all of Eco’s novels that followed — with the very wide-berth possible exception of Foucault’s Pendulum — have been critically, if only politely well-received but widely unread (do you know a soul who has bothered to read Baudolino or the ponderous The Mysterious Flame of Queen Loana? Even the recent The Prague Cemetery disappoints).

Which leads to an obvious question: why didn’t (and why doesn’t) Eco simply write the sequel to The Name of The Rose? Like Sherlock Holmes, the book almost begs to be written: The Protagonists, Brother William of Baskerville and Frater Adso of Melk, travel together on a Crusade. Or Brother William re-joins the Inquisition. Or both are called to Rome to assist the Pope in some urgent matter pressing upon Christendom.

No matter. We may never get the sequel. But re-reading The Name of The Rose is one of the pleasures that never disappoints, even a generation after it first appeared.

Publishing legend Robert Giroux once said, “A ‘classic’ book is a book that stays in print.” On that level alone Eco’s The Name of The Rose is classic — and one of the most enjoyable novels written in the past 30 years, in any language.