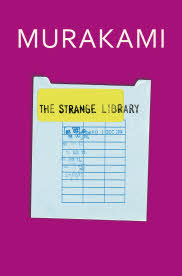 The hardcover edition of Haruki Murakami’s new short novel, The Strange Library, earned raves for both the text and the design.

Ebooks are good and useful and affordable, but one thing they’re not is beautiful. But one theory I’ve heard batted around on more than one occasion is that because of e-books lack of…pleasing aesthetics, that provides an opening for traditional (hardcover and paperback books) publishing to give readers both the pleasure of reading a good book along with the additional pleasure of holding in one’s hands a beautiful physical object.

One publisher who seems to be taking advantage of this is the UK’s Harvill Secker, whose hardcover edition of Haruki Murakami’s new short novel, The Strange Library, earned raves from for both the book AND the design from Arifa Akbar at The Guardian:

…”I came across The Strange Library some days ago and it made me stop and start with its mysterious magenta cover and its library ticket holder on the front. It is an odd and beautiful thing – a thing more than a book, whose design doesn’t just adorn but penetrates the story, melting into it with its dainty, surreal and haunting images that almost, at times, seem to finish Murakami’s sentences.

It had me enthralled, a pretty artifact that was a story of childhood, death and reading, drawn in both words and pictures, like a fairytale, yet there was nothing childish about it. As someone with an avowed aversion to re-reading – life is too short and there are too many good books in it – I will break my own rule with this one, and that is partly down to the alchemy of its illustration.

Book design is seeing a resurgence. This statement is not based on the result of a poll. Its science emanates from the hefty postbags I receive every week, filled with books that are more beautiful, more inventive in design, than they used to be. Not just high-end books either, but those exquisitely designed flapped paperbacks (Pushkin Press) or smart commercial covers (Gone Girl) , attractive “series” re-designs (Penguin English Library) and of course, the display-worthy hardbacks.

When did the design of a book become its own lure, a reason to buy it, display it, enjoy leafing its pages? Well, we could trace that back to illuminated manuscripts, but as far as modern times go, it might be pinpointed to autumn 2011, when Julian Barnes’s Man Booker prize-winning speech for The Sense of An Ending gave thanks to his book designer and creative director of Vintage, Suzanne Dean. Barnes focused our attentions to a new tendency of the past decade, which has grown in tandem with the rise of the eBook, so that a dynamic tension between the easily digestible e-story and the permanent beauty of the book now runs in complement.

I shouldn’t have been surprised to discover that The Strange Library is designed by Dean too (as well as this year’s Man Booker winning book!). Dean does not regard recent attentions on illustration and design to be a defensive response to the ebook revolution, though she agreed digitisation had, ironically, led to more beautiful books being published.

“From an art director’s point of view, this is our chance to seize the moment. There is more emphasis on what covers look like and on the text design – an area that hadn’t been a focus before – and generally on the book as a package. I think this interest in book design has grown over the past 10 years – more people want to design books, more editors are open to ideas. It has developed under the same arc as ebooks.”

And at The Millions, Buzz Poole took a look at the differences in design between the UK and US editions (Random House trade paperback, no hardcover available): “What is immediately clear upon seeing both English-language editions is just how much thought went into the design and illustrated content of these two very different books. Published by Knopf, the U.S. edition is a Chip Kidd production, and while Kidd’s prolific portfolio demonstrates how comfortable he is working within any and all design idioms, The Strange Library is an in-your-face zoom-in on the faded comics qualities Kidd so often employs when working on Murakami titles. Suzanne Dean, art director for the book’s U.K. publisher, Harvill Secker, takes a very different approach to The Strange Library (bottom). Open up that edition to any page and the word “vintage” will spring to mind, from the lovely marbled endpapers to the reproduced antique plates of dogs and birds.

Both designs inject a sinister quality into the goofy story, but the illustrations and design interact with the text quite differently. In the U.K. edition, the illustrations and design are about much more than ornamenting the story; the illustrations actually complete sentences and respond much more literally to the words on the page, making the relationship between the two dependent on one another. In the U.S. edition, certain of the illustrations respond directly to the narrative flow, but in a more evocative, atmospheric manner. Some of the images, judging by the colors and pulpy quality, appear to have been scanned from source material that probably qualifies as vintage, but how they are used on the page gives them a more contemporary collage dynamic a la Roy Lichtenstein and FAILE.

It is fascinating that Murakami would permit his words to be so freely interpreted, but perhaps that was his intention all along with this story. As an author who has devoted a great amount of thought to dreams and dreamlike realities, it might have struck him as fitting to let designers manifest the elusive qualities of dreams on the page. (And it is impossible not to think about what these three different editions say about the differences between publishers and readers in Japan, the U.S., and U.K., but that is a topic for another time.)”

I can hardly wait to read it. And look at it.