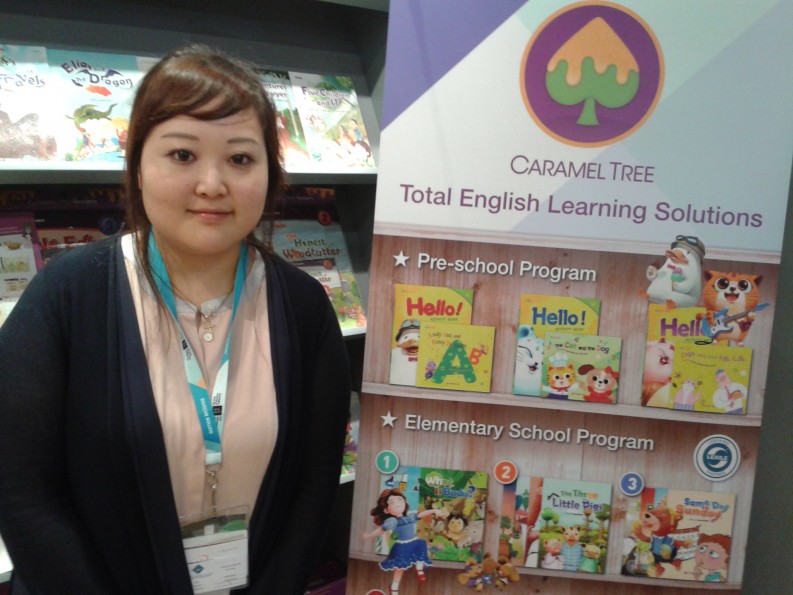 The South Korea stand at the Guadalajara International Book Fair

South Korean publishers have descended on the Guadalajara International Book Fair (FIL) in Mexico in a bid to tap into the potentially vast Latin American ESL market.

The Korean Publishers Association is present at the FIL, heading a delegation of two educational publishers keen to expand into Latin America with English and Chinese-language learning textbooks. “Our priority is to target countries where English is needed as a second language and there is market demand for children’s English education. We know Mexico is one of the countries with the highest demand, for example,” Angie H. Roh, marketing manager for Caramel Tree, told Publishing Perspectives.

Caramel Tree is a children’s imprint of JLS, a Seoul-based educational company with offices in Seattle, San Francisco and Vancouver.

“We provide textbooks for children from kindergarten to elementary school level learning English as a second language,” Angie said.

“We have international clients and we provide partial customization of books if required. We have 200 for elementary children and publish between 20 and 30 new titles every year. As well as export we have more than 100 ESL schools in South Korea, and therefore our print runs are high for our captive market.

Outside South Korea, other Asian countries such as China, Singapore and Thailand are our biggest markets, and we’re in talks with distributors in Brazil, Peru and Mexico.

“We definitely think there is a lot of potential for us in Latin America.”

The firm either imports directly to distributors, currently in 10 countries, or strikes up partnerships with publishers that bring out its books under license, and sells physical and ebooks via Amazon.

“Our books are written by English, Canadian and American children’s book authors, and we buy exclusive rights,” she said. Kong & Park is the other textbook publisher hawking its wares in Guadalajara in a bid to expand its catalog of Spanish-language books into countries such as Argentina, Chile, Colombia and Mexico.

The Seoul-based publisher, which also has offices in Schaumburg, Illinois, is also looking to distribute Spanish-language books for learning Chinese characters in Latin America, according to the firm’s president Kyung-Yong Kong.

“We had yet to establish a relationship with Latin America, and so we have come to Guadalajara to allow our publishers to expand into new markets,” Korean Publishers Association international project development director Kim Eun Hee said.

“It’s a potentially huge market and we want to open it up. There are many readers but we have yet to see what they are interested in, whether it’s just picture books and textbooks, or also South Korean literature.”

Despite having an 84% Internet penetration rate, one of the world’s highest for a country of nearly 50 million people, the ebook has yet to take off, Kim said.

“Many people still like to read paper books, and with children, many parents are reluctant to let their children read on electronic devices.” Readers’ love of books is evidenced by the country having more than 31,000 registered publishing companies and more than 13,000 libraries.

Also present at the FIL is the Literature Translation Institute of Korea, which provides translation and publication grants for South Korean writers.

The KLTI has formed an alliance with Toluca, Mexico-based publisher Bonobos Editores to produce books by authors from each country for translation and publication in Mexico and South Korea.