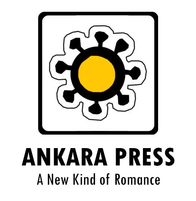 Several of the titles launched by Ankara Press.

Ankara Press, a new digital imprint of Nigeria’s Cassava Republic, has aims to deliver “romances that reflect the complexity” of modern African lives.

Nigerian publisher Cassava Republic Press has launched a new digital romance imprint, Ankara Press, with six brand-new titles. The aim of the series is to create “a new kind of romance,” which reflects the lives and aspirations of modern African women (and men) and challenges the stereotypical perceptions of the romance genre, an ambitious undertaking in today’s difficult publishing environment.

Romance is of course not new to Africa. From imported romance such as Mills & Boon and Harlequin to the African-authored romances of the 1980s (Drumbeats, Pacesetters, Hints), African readers have been consuming romance novels for decades. The Littattafan Soyayya (‘literature of love’) published out of Kano continues to sell tens of thousands of copies. Self-published authors such as Myne Whitman and Lara Daniels have amassed large online followings. And indigenous publishing houses are now creating contemporary romance stories set in South Africa (Sapphire Books, Nollybooks), East Africa (Storymoja Drumbeats) and Francophone Africa (Adoras).

However, Ankara Press pushes the genre further, by developing a list of stories that specifically aims to present modern relationships in ways “that challenge boundaries and go beyond conventional expectations,” and by offering readers alternative models of behavior from those to which traditional romances bound them. As publisher Bibi Bakare-Yusuf states: “Our sensuous books will challenge romance stereotypes and empower women to love themselves in their search for love, romance and wholesome sex.” And of course this makes sense commercially. As Ankara Press’s submission guidelines make clear, “it is time that the continent’s rising consumer class gets romances that reflect the complexity of their modern lives.”

There is a huge untapped audience of potential readers who already consume romance in the form of fashion, fragrances, films, music and glossy magazines. By marketing romance novels as entertainment rather than as literature (and thus avoiding the negative associations with educational reading materials), Ankara Press may well be on to something here. The majority of contemporary writing in Africa that has been feted in recent years has been literary fiction, which has produced some great writing but rather unremarkable sales. So this move into romance publishing is significant in terms of breaking new ground within the Nigeria from both a cultural and economic perspective. As Ankara Press’s guidelines state: ‘We believe that one way to get people reading is to introduce them to short, snazzy, fast-paced stories about the life they live or yearn to live’.

The mode of delivery is also significant. Ankara Press is publishing all six titles initially as ebooks, downloadable to computers, e-readers and mobile devices – thus removing the reader still further from the traditional relationship with a print book. By launching as a digital imprint, issues of distribution and print piracy are obviated and a global audience becomes a reality, as the stories are available from the day of launch, across the globe, in multiple currencies. Whether the reality of sales can live up to the hype remains to be seen, but Ankara Press’s ambitious initiative may indeed introduce a new generation of African readers to a new kind of romance – and perhaps rekindle the love of romance writing for those who fell in love with Pacesetters and Hints all those years ago.

All six titles will be available to download from www.ankarapress.com at a special introductory offer price of ₦500 ($2.70).

A version of this article originally appeared on Africa is a Country.

Emma Shercliff is a publishing consultant and a doctoral candidate at the Institute of Education, University of London. Her research explores and documents the role of female publishers in shaping the literary landscape in Africa. Emma was formerly Managing Director of Macmillan English Campus, a digital publishing division of Macmillan Publishers. She is currently based in Abuja, where she is working for the British Council on a research project, and with Cassava Republic Press as part of her doctoral fieldwork.