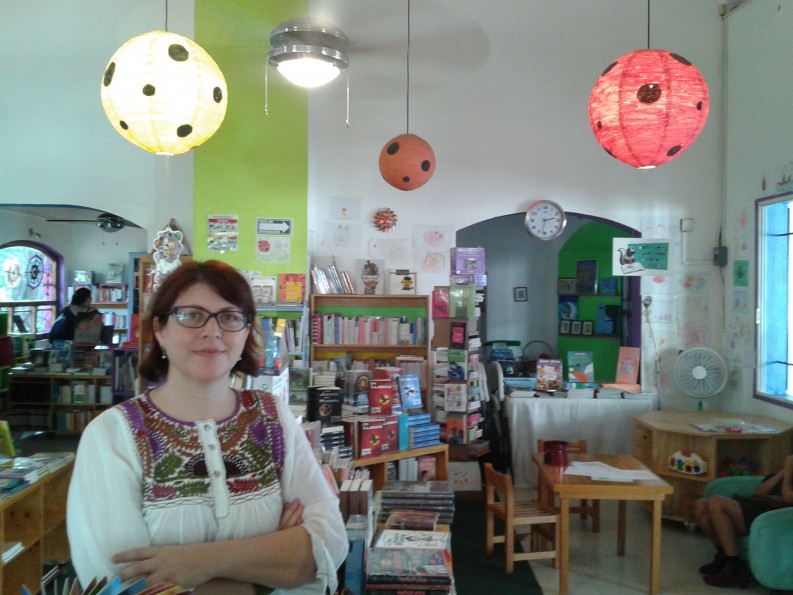 Sonia Verjovsky opened the Catarina Marina bookstore in Cuernavaca, Mexico to “create a space for children and families”

Named after a line from a poem composed spontaneously by her young son, the Catarina Marina bookstore was founded by Sonia Verjovksy and her brother Alberto in 2009. Just as it begins to break even, the business received the annual national bookstore award at the Guadalajara International Book Fair (FIL) on December 1.

“One of the main reasons why I opened it is because I have a son, which is perhaps the reason behind many cultural projects, they are very personal,” Sonia told Publishing Perspectives at the store in the city of Cuernavaca.

“There were no children’s bookstores in Cuernavaca when we moved here and I’ve always loved children’s literature, picture books, and the visual language they involve. I’d worked for a long time as an editor and I knew there was a lot of growth in children’s literature in Mexico, a lot of new publishers, but there was nowhere to obtain them. I knew it was an area that was still growing and could be exciting within a market that is collapsing in general.”

There are only around 500 independent bookstores in all of Mexico, in a country of 120 million people, and part of the motive behind the creation of the national bookstore award, now in its seventh year, was to combat the closure of bookstores.

The prize is funded by the FIL and the national institute for bookstore development, with a purse of $14,500, equivalent to the initial investment behind Catarina Marina.

Cuernavaca seemed like the perfect combination to open a children’s bookstore, Verjovsky says.

“A small city with families looking to raise their children surrounded by culture, with a big cultural scene and lots of bilingual schools, as well as the highest quantity of researchers per capita in Mexico, with academics working at the national university’s (UNAM) research institutes.”

“We found some premises that felt safe and comfortable for children, in what was then a run-down mall where rents were low.”

The idea sounds perfect on paper, but the reality has been harsher.

“There have been several issues. You tend to set up these projects as an idealist without a lot of background in management and running a business, so it’s easy to let your idealism carry you away. The publishing industry is not willing to bet on a small bookstore. And then you have to get people to come to the bookstore, and in a country with a high level of illiteracy where books are not appreciated the way they are in other countries. Although that is changing,” she explains. Inside the Catarina Marina bookstore.

Creating a Space for Reading

Around 6% of Mexicans over the age of 15 are illiterate, according to the national statistics agency INEGI, a figure that has remained static for the last decade.

“Parents need guidance when looking for books for their kids because they didn’t read as children, and part of the idea behind the bookstore was to provide that space for parents where they would feel comfortable to come and ask,” Verjovsky says.

“It’s been very interesting because the small, independent publishers are the ones that have been behind us the whole time and given us books on consignment, such as Ediciones Tecolote, El Naranjo and Nostra Ediciones.”

“Only recently have mainstream bookstores created shelf space for independents.”

Another challenge to bookselling is the fact that books provided by publishers on consignment are wrapped in plastic, preventing potential browsers from exploring their content, a crucial consideration when buying books for children.

“It’s something I’ve only seen in Mexico and which is a terrible thing, and which turns the book into an object that just ends up left on the shelf.”

“With children’s books in particular, when you are talking about an area that is highly creative and innovative and with new materials and interesting textures and formats, you have to be able to open the book.”

“And because buying a book is something to be experienced together as parent and child, choosing something that means something to both of you and which you can read together, transforms it into an experience, a moment of intimacy,” she says.

And the whole process of having to send books back is lengthy and costly, and “reminiscent of the 19th century,” she says.

She also cites a common misconception among parents of the unsuitability of books, which can be considered too young or too old for a potential reader.

“Many books are wonderfully illustrated and have a narrative sequence that is perhaps only illustrated, and which is an exciting thing about children’s literature, that you can create a visual relationship, especially in a society with illiteracy where visual elements are always taking preference over words.”

One of the bookstore’s policies is not to sell merchandising, such as film or cartoon tie-ins or spin-offs, in an attempt to encourage diversity.

“They are such monsters, with so much marketing behind them and children will always head straight to them,” Verjovsky says. “Which is sad, because smaller publishing houses are producing very exciting books that are very literary and complex and with which a child can form a relationship for the rest of their lives.

The idea behind the bookstore was also to create a space for children to read.

“We thought it would be great to create a community of people, parents and grandparents and children who could meet in a place where you don’t have to buy a ticket to get in and have the joy of buying a book physically, rather than buying or meeting online, turning it into a social event, as becoming a parent can be very isolating, particularly for mothers,” Verjovsky says.

“It’s also a place where children can come and draw, so part of the idea, apart from selling books, was to create a space for children.”

Sales have been increasingly slowly and after five years the store is beginning to break even. The three owners, the Verjovsky siblings and a third partner, who has some publishing industry experience, all have other day jobs. Verjovsky is a translator.

“It’s slow and it’s a niche market and requires patience, but we’re starting to build relationships with schools and book fairs. We spend very little on publicity.”

We sell more picture books than anything else as the majority of our customers are parents of young children.

Another challenge is that children grow so fast and we are constantly searching for new clients, and developing the young adult section allows us to cater for children as they grow up, she explains.

“We also try to show parents to teach their children how to handle and look after books. Children who have received books as gifts tend to become readers, so it’s important that a child begin to build their own library at home, and therefore parents need to know the importance of investing in books.”

The bookstore does not yet sell online but is an area into which it will move over time, particularly given the growing size of the Spanish-language children’s book market in the US, evidenced by the importance of the Los Angeles book fair.

And the bookstore is also increasing its stock of books in English.

“The Harry Potter series has had a huge impact on children’s reading as it has led children to look for similar tales and they can tap into the long tradition in English children’s literature. We’re very grateful to JK Rowling.”