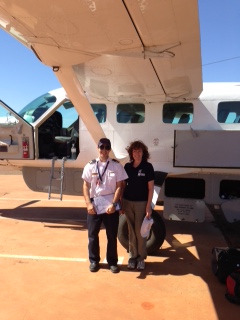 The Indigenous Literacy Foundation has spent a decade leveraging the skills of publishing pros bring the love of books to remote communities in Australia. Listening to the typical work trips made by Karen Williams and the team at the Indigenous Literacy Foundation (ILF) in Australia – winner of the International Education Initiatives Award at the inaugural London Book Fair International Excellence Awards earlier this year – means you have to redefine the word ‘commute.’

Founded in 2004 by Suzy Wilson of Brisbane-based Riverbend Books, and established the following year by members of the Australian book industry, the aim of the ILF is to use the skills of book trade professionals to address literacy levels in remote indigenous communities.

In the past four years Williams has been on nearly 20 field trips – by airplane, light aircraft or four-wheel drive – to some of the remotest parts of Australia These include communities in the Kimberley in Western Australia where she has driven for hours on end to reach a small community of 80 people; to a larger community on the edge of the Great Sandy Desert, called Warburton, population 500; to the Tiwi Islands, off the coast of Darwin by light aircraft, and to Alice Springs in Central Australia and Broken Hill. Sometimes the conditions have been pretty challenging – in Alice Springs recently the temperature reached 45 centigrade. Earlier this year Williams and colleagues travelled to Tjuntjuntjara, said to be the remotest community in Australia which involved a 2000-kilometer flight to Perth, a three-hour flight back to Kalgoorie and then a grueling, eight-hour dusty drive.

“We arrived at this beautiful town in the middle of a red landscape,” she recalls. “The elders and community took us out to see their country. We went fossil hunting – this region used to be the bottom of the sea so there are lots of interesting fossils – and then went walking in the bush, discovering bush tucker and collecting beautiful roots from ancient trees which is stripped and then carved into items. They also gave us a try of Kangaroo tails, cooked on coal fires.” This is a community with which the ILF has been involved for some time. It helped pupils at the local school publish a book called How Does Your Garden Grow, based on the school’s garden, and two years ago it brought a group of students and teachers and elders from the community to Sydney to participate in the charity’s Indigenous Literacy Day, a national advocacy day. “This was held at the Sydney Opera House. Can you imagine it? It was the first time the kids had been on a plane, for some it was the first time they had left their community, got on a train, seen a city, bought takeaway and most importantly, been into a bookshop.”

To date, the ILF has delivered more than 120,000 free books to more than 230 communities and service organizations. It has published and funded more than 40 books, including some in 11 Aboriginal languages. It has taken a host of Australian writers to run writing workshops in remote schools in all of the areas mentioned above and more, and it has launched an early literacy project for a small number of remote communities. She is grateful for the help provided by the LBF award, saying: “Winning the International Education Initiatives Award has been an enormous privilege and honor and it has had a big impact in terms of public recognition of what we do and why we do it.” The judges said that its work “demonstrated real impact in the community serves”.

Williams adds: “Although a big donor has not stepped forward, it has certainly raised our profile as far as the general Australian public is concerned, as well as with schools and libraries across Australia, and with the Australian book industry itself, helping us raise considerable amounts of money. This is really important because we don’t get any government funding and spend a large part of our year in raising funds and public advocacy.”

Do you know of an international company or individual that deserves wider recognition by the industry? Voting is now open for the London Book Fair International Excellence Awards, run in partnership with the UK Publishers Association. Full details are here: http://www.londonbookfair.co.uk/awards