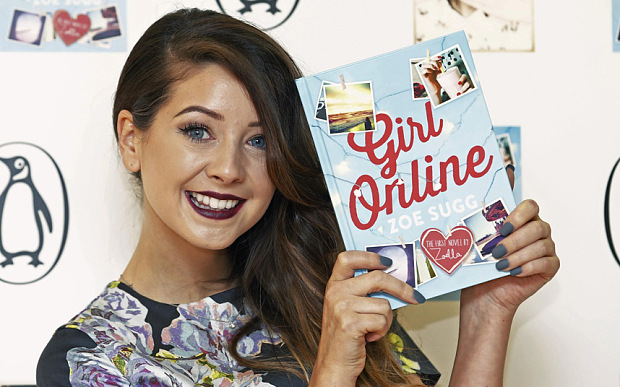 In the UK, Zoella was revealed to have used a ghostwriter, while Clare Balding’s book cover looks fake, but isn’t. How much of this is okay? YouTube sensation Zoella (Zoe Sugg) is not a national treasure in the UK yet, but the controversy over her novel Girl Online, and the questions it raises about authenticity, might seem to have a faint echo in the latest book from someone who is definitely a UK national treasure, the TV presenter and media star of the 2012 Olympics, Clare Balding.

No one is suggesting that Balding’s Walking Home – My Family and Other Rambles has been ghostwritten, which was the issue at stake with Girl Online.  But if authenticity and upfront honesty are the issues at stake, take a close look at the jacket of Walking Home.  It purports to show Balding on a country path, with her dog Archie faithfully by her side in the long grass.  Only thing is, it looks awfully fake.  Balding has a kind of thousand-mile stare.  It doesn’t look real.  The lighting is all wrong.  It looks like studio lights on her jacket.  The whole affair looks horribly like a composite cover, using three elements: Balding photographed in a studio; a separate photograph of her dog (although, weirdly, it seems that this is in fact a painting, to complicate things further); and a generic, library shot of a country path.

‘Trouble is, just as one feels a certain indignation building up – this is Clare Balding, a national treasure, how can she do this? – her editor Joel Rickett at Viking clarifies things:  “It’s from a real photo shoot! I was there – we shot it in the Hampshire Downs on 13 January. The photographer Charlotte Murphy did a fab job.  Definitely no studio, no painting, no stock images.  All we’ve done is add a very slight Instagram-style filter to enhance some of the colours – that said, it was a glorious blue morning and the sky was actually that blue. Archie (the dog) kept misbehaving but did strike that great pose at just the right moment.”

Meanwhile, Penguin admitted this week that YA author Siobhan Curham was “part of the editorial team” behind Girl Online, following lots of rumours on social media.  Sugg has received much criticism from YA authors who felt that both the author herself, and her publisher, should have been more upfront about it.  She responded: “Of course I was going to have help from Penguin’s editorial team in telling my story, which I talked about from the beginning.  Everyone needs help why they try something new. The story and the characters of Girl Online are mine.”

This has echoes of all those comments from leading figures in the self-publishing movement, such as Orna Ross of the Alliance of Independent Authors, who say how important it is to seek professional help.

What will be interesting now is to see if Curham’s next novel has ‘From the ghostwriter of Girl Online’ on the jacket.  There could be some interesting negotiations over all of that, one imagines.