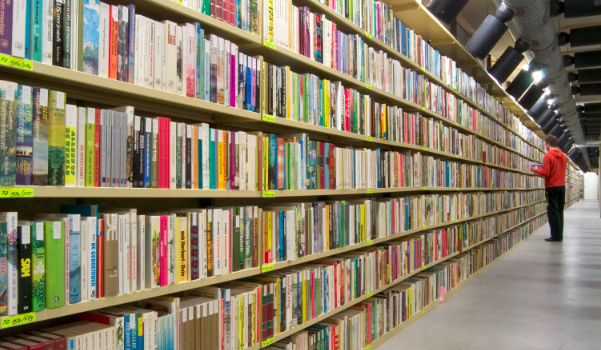 Integrating bookstores into libraries would help both survive, particularly in underserved communities.

I often dream I am in a bookstore or in a library. Then I wake up and I am in Queens, the largest of the five boroughs in New York City, the most diverse place imaginable, and where there are currently two Barnes & Noble and one independent book seller and a few places to buy used books. But given the size and density of this borough, this borough truly lacks bookstores.

Queens Library, on the other hand, has 62 branches scattered throughout the borough. Hours, staffing and budgets were severely cut during the Bloomberg administration and then even further by the cost cutting measures put in place by the now on paid leave CEO Thomas Galante. The entire Queens Library is struggling to recover from the alleged misappropriation of funds and mismanagement of the library in this borough during the many decades that Galante was in charge of its finances.

In September 2014, the Center for an Urban Future, in New York, published a report, Re-envisioning New York’s Branch Libraries. Written by David Giles, Jeanette Estima and Noelle Francois, they stated in the introduction: “In fiscal year 2013, the city’s 207 branch buildings greeted nearly 36 million visitors, or approximately 160,000 every day they were open. Libraries circulated 61 million materials citywide and enrolled over 2.4 million people in their public programs, including everything from story time for elementary school kids, to English language classes for immigrants, to film editing workshops for teenagers. And despite dwindling budgets, these performance numbers have been growing rapidly over the last decade. Between fiscal years 2003 and 2013, circulation increased by 46 percent and program attendance by 62 percent.”

In my section of Queens, Kew Gardens and Richmond Hill, these numbers were also reflected in what our small, Carnegie Library was providing as well. This performance level was also maintained here despite being open less than 40 hours/week, no weekend hours and a physical deterioration that should be remedied.

This area of Queens has no bookstores. Yet, possibilities for growth and expansion that would bring the vibrant book culture that our area also has into the library could be accomplished by integrating a bookstore into the library and creating a public/private alliance that can feed off each other’s abundant gifts.

Let me state the obvious when it comes to bookstores, we have too few, the rent is too high and the chances of a bookstore surviving during economic downturns are small. Yet, a library is always there. The buildings are maintained by the city budget (though, there are many problems here as well) and the utilities, security and plumbing are built in. Libraries have comfortable places to sit and read, computer stations and free wifi for the customers. There are programs, from exercising to book clubs to chess teams to quilters, that are ongoing, free and fill the spaces with people from the community and beyond.

Bookstores are in the unfortunate position of having to pay for all their services. As independent businesses they are at a disadvantage in this current real estate economy and with the margins on book sales so low, staying in business is a feat of endurance and good fiscal management.

But what if a bookstore no longer had to worry about the exorbitant rent and the dealings with landlords who can terminate a lease renewal at will? What if their cash weren’t tied up in planning for payment of utility bills and worries about their construction and decorating costs? What if bookstores could invest in what bookstores are best at — filling their shelves with books and taking chances on new authors rather than being concerned that their stock won’t move fast enough and they are wasting valuable space trying to sell what is more difficult to sell but that they know can be sold?

Waking up to these possibilities, the marriage of the public and the private, made me see ways in which libraries could become even more relevant to the communities they serve as well as finding new programs and services now possible due to their partnering with an embedded bookstore.

Other benefits began to occur to me as I thought about some of the more difficult parts of a library’s life, for example, their fraught relationships with publishers. Publishers are not, in my opinion, truly aware of the benefits of working more closely with libraries especially when it comes to e-book distribution agreements. This is a sore spot and not likely to be solved with a bookstore embedded in it but given the larger number of possible bookstores within libraries that we can now imagine (we could imagine that Queens went from 3 bookstores to 65), a whole new level of buying power has now opened up in this borough alone and what publisher is ever going to scoff at a much greater number of bookstores to sell their books to? Wouldn’t this partnership between libraries and bookstores also grant them a better position to negotiate better terms with publishers? Given this kind of phenomenal growth, publishers would be foolish to overlook new ways to make use of their increased market share in Queens alone.

Library/bookstores would now become destination stops for book tours, for the creation and nurturing of a large literary world such as we now have in Queens and with this comes an ever greater set of possibilities for growth and expansion. Given how imaginative librarians and bookstore owners are when it comes to meeting the needs of those they serve, I foresee a greater number of local jobs, new initiatives in the creation of literary journals and even classes in e-book and other book production techniques.

In other words, this new relationship opens the door to more author tours, more classes of all kinds as well as ushering in a new relationship among these three partners who have much to gain from this new cooperation.

Seeing this kind of growth in its local library will also, I believe, cause the other local businesses to want to participate in this expansion, whether it is by offering gifts to the library, or by sponsoring events or setting up endowments for the library. As the library’s health is assured, the future of the bookstore is also guaranteed.

Just as the used book business has become a part of a library’s future too, as it has with new bookstores, each and every new idea can be tried and tested. When a bookseller isn’t worried about losing a lease and when a library isn’t worried about not having long enough hours or enough staff, I see no downside to this theoretical plan for saving the bookstores and making libraries more robust. The best part of this marriage is that no one can predict where it will lead or what it can accomplish. That is a very good thing too.

Deborah Emin is the founder/publisher of Sullivan Street Press, a small publisher dedicated to changing the publishing paradigm while saving the planet.