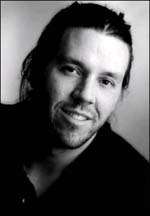 At The Millions, Glenn H. Shepard interviewed the Portuguese translator of David Foster Wallace’s Infinite Jest about the challenges of the project. Over the last few years, we’ve looked at some truly challenging works in translation – Finnegan’s Wake into Chinese anybody? But it’s hard to imagine a more difficult contemporary classic to translate — into Portuguese yet — than David Foster Wallace’s epic Infinite Jest.

Yet, Caetano Waldrigues Galindo (by coincidence – or not – a specialist in the works of James Joyce) — has just completed translating Infinite Jest into Brazilian Portuguese.

As Glenn H. Shepard reports at The Millions, Brazil’s most respected publisher of literary fiction and nonfiction, Companhia das Letras (now part of the Penguin Random House group) published a deluxe hard edition of Graca Infinita (as it is known in Portuguese) on November 28th.

Shepherd: How did you first learn about David Foster Wallace’s work? What else of his have you read? Why did you decide to start with Infinite Jest?

Galindo: I got to know about IJ when I was deep in my Ph.D. thesis on Ulysses. It was a time in my life when I thought nothing post-Ulysses was worth the effort: I was a real bore back then! “Badness was badness in the weirdest of all pensible ways,” as good ol’ Jim J. would have it. Then I heard about this huge book, and many people I respect said I should check out. And so I did. That was 2005. I got hooked. After that I read pretty much everything Wallace wrote, and everything people were writing about him. When I sat down to translate IJ, I had read the whole book twice, and was deeply familiar with Wallace’s voice and “tricks.” As a matter of fact, my fascination with the book was probably what landed me the job as a translator for Companhia das Letras. André Conti, the editor at Companhia das Letras who kinda headhunted me for them, is a big Wallace fan. From the moment I was hired in 2008 we had this dream of publishing IJ in Brazil.

Shepherd: How did you deal with Wallace’s erudite vocabulary? What about all that sketchy French?

Galindo: Well, I like words. Funny, strange, exotic words. I teach the history of the Portuguese language at the Federal University of Paraná. So I have deep-ish pockets myself in that department. The problem with the French, though…As a French major, I just couldn’t turn a blind eye to all the mistakes. At first I thought I might exert the prerogative Francis Aubert claims for the translator as “final copyeditor.” However, in the end, and after talking to Herr Blumenbach, I decided to leave the mistakes, not knowing what else to do. Was it intentional? Am I to decide? Let the reader sort it out.

Galindo: It was a fascinating process. And in this book in particular, the sensation of being “inside” someone’s head (pun intended) is really overwhelming. I love the book even more today, after having unraveled and re-raveled its inner workings. I could feel the plot: I could almost touch it. But you have to remember I was not working on a regular daily schedule. When I could, I clocked 10 hours. But then, the next day, I wouldn’t have time to translate at all, since I would have papers to grade, or other things to write, or students needing help, classes to teach. I think that helped keep me safe. Wallace’s (or Incandenza’s) mind seems to be exactly what the book is: a beautiful labyrinth. Enchanting. But dangerous…

Shepherd: What do you make of IJ’s notoriously indeterminate plot? Did your interpretations or understandings affect your translation?

Galindo: As for the plot: well, I’m a translator. The guy designs a labyrinth. I reproduce the design with my own bricks and mortar. It’s not my job to point any ways out, if there are any! As a reader, I do have my interpretation, but that’s not what matters. As I tell students all the time, the translator’s job is not to find an interpretation, but to try and find all interpretations, and keep these possibilities open for this new reader who’s going to have only the translation as a guide. But, back to plot, you basically follow the original steps. No biggie. There’s one thing I regret, though. A student of mine, Ana Carolina Werner, pointed it out to me. The final two words of the book, referring to the tide being “way out,” also suggest the possibility of exit, escape. But there was no way to keep this double entendre in the Portuguese.

Shepherd: An independent Portuguese translation was published in Portugal prior to your own. Have you read it? How different is it from your own? Do you think Brazil warrants its own translation?

Galindo: I haven’t read it, though I have talked to the translators. Very nice folks! A very competent job as far as I can tell — they most kindly sent me their book. About the two translations: First, there is the problem with rights. You do not buy the rights for the Portuguese language as a whole, only for the country. So, officially I can’t buy their translation in Brazil, and vice versa. Second, and perhaps more importantly, Anglophones should be reminded that the gap between European and Brazilian Portuguese is much wider than what you have between British and American English. As a matter of fact, I would be incapable of writing anything (translation or original) that would ever “pass” in Portugal as anything other than Brazilian vernacular Portuguese. Alison Entrekin, for instance, who is the greatest Portuguese-to-English translator alive today, is Australian and works for British and American publishers. I don’t know anyone who could do that in both European and Brazilian Portuguese.

Shepherd: In the European Portuguese translation, the title is rendered as Piada Infinita, while you translate it as Graça Infinita. Explain. Doesn’t graça have mystical overtones, in the sense of religious grace?

Galindo: Well, that’s the one I was afraid of…So here goes. First, there is the question of Brazilian versus European usage. Both piada and graça refer to jokes, or anything that is funny. But graça also has an extended meaning cognate with English “grace,” both in the sense of religious grace and physical gracefulness. In Brazil we have an expression, ‘não tem graça’, which means both “that’s not funny” but also, “that’s not nice”; there’s also ‘sem graça’ which means “awkward,” or literally “without grace.” Europeans use piada in almost exactly the same expression, não tem piada, “that’s no joke, that’s not nice.” So in Portugal, piada has a more extended range of meanings, somewhat like graça in Brazil, whereas piada in Brazil means only “joke.” So we couldn’t go there. Second, and perhaps more importantly, the expression “graça infinita” was used by Millôr Fernandes in his Brazilian translation of Hamlet. We were toying with the title Infinda Graça, which uses an older, more archaic word for “infinite,” and which sounded good to my ears. But the Hamlet factor was a good argument, and we ended up with Graça Infinita. Finally, you are right, graça does sound religious-y. We didn’t have that many choices to begin with, and I don’t think this “mystical” undertone is wrong. Is it? There may be no “God” figure central to the novel’s narrative. But, sorry! I really do like this idea that the ineffable, the mystical (as good old Ludwig W. would have it) is always there, always lurking, always tempting. So I stand by our choice!