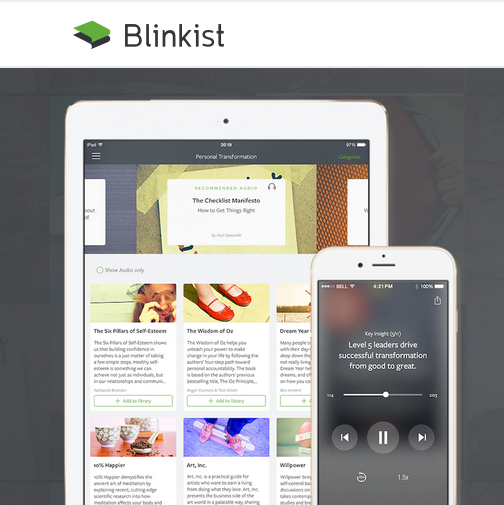 Berlin-based Blinkist condenses nonfiction books down to key points called “blinks” and is offering an app that delivers books as 15-minute audio summaries. Berlin-based Blinkist, with a platform that condenses nonfiction books down to key points called “blinks” (often referred to as the “CliffsNotes” for non-fiction material) has announced that it is going multi-media, with the launch of an audio version designed for “readers” who, in the words of the Huffington Post’s Claire Fallon, “want a hands-free, eyes-free source of factoids from popular publications.”

Available for both iOS and Android devices, Blinkist has new audio features that allow users to listen to key sections from 50 non-fiction titles (with five new ones to be added per week.) including titles such as Freakonomics and How to Win Friends and Influence People. (As Fallon noted, The Blinkist audio editions will also clock in at 15 minutes per book. You can “read” Freakonomics, Outliers and A Brief History of Time in the space of a 45-minute commute.)

Holger Seim, CEO and cofounder of Blinkist was quoted by itproportalcom: “With such an abundance of information competing for our attention, it can be overwhelming trying to choose what content to consume. By breaking down books and summarizing their most important insights into packages that only take 15 minutes to read or listen to, there’s literally no excuse to start learning and reading more.”

But while it might seem doubtful that listening to “blinks” from A Brief History of Time in an even briefer 15 minutes can offer any real opportunity to learn, Seim told the Huffington Post that the app could be used to help readers (or listeners) determine which books they might actually want to sit down “and read the old-fashioned way.” Seim cited an internal survey of users which showed that 50 percent said that they used Blinkist to find new books to read in full. “Forty-two percent state that Blinkist helps them to read more books again.” A mere 9 percent said that they used the app in order to read fewer books in full.

Blinkist 3 can be downloaded for free and non-paying users have access to one book per day. Subscribers have unlimited access to Blinkist’s complete library of titles.