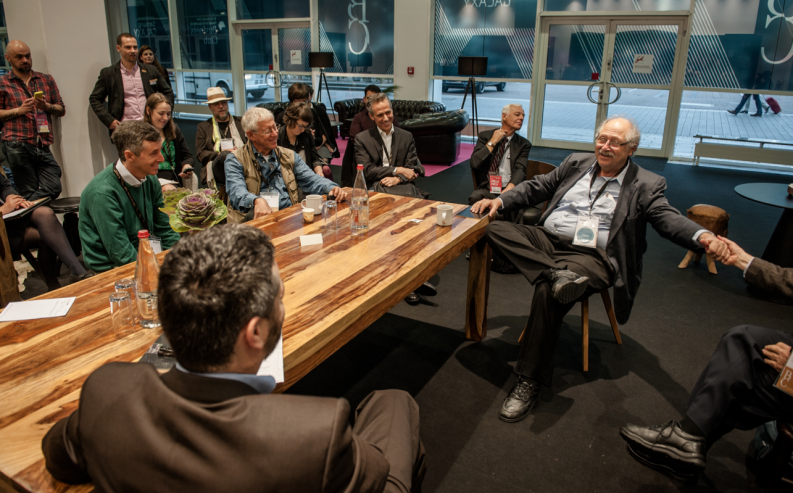 “I came to the conclusion that it is all about talent. God comes at 3 a.m., touches your shoulder and tells you that you will be Spielberg, Mozart and Beethoven. You give him the ability to work and then leave him alone,” said Yossi Vardi at the Frankfurt Book Fair in October.

The man who is now one of the best known and most influential technology investors in Israel—one who has invested in 85 startups, has sold 24, and closed 27—said that he believes in execution over ideas, and doesn’t believe in business plans, Powerpoint, or ties.

“Take off your tie,” he advised the gathering. “It restricts the flow of blood.”

He added that you also need to manage the number of your investments and equated the practice with feeding kittens with bowls of milk: “One kitten is nice, two is manageable, five is difficult, and 85 and you end up getting covered with kitten shit.”

Vardi said that he fell into investing technology start-ups by accident, after investing in his own son’s company out of guilt. That company became ICQ, and was sold to AOL for some US$400 million in 1998, in the earliest days of the original internet boom.

Asked why Israelis have been so successful in the technology sector, Vardi said that, while it might have to do with the country’s character, its military culture, and its sense of community or cultural purpose, it was more likely to do with its … mothers, the people who see their children as the most talented people and drive them to succeed.

As for his own success, Vardi was demur, attributing it in part to his commitment to reading and books.

“Israel was founded in 1948 and we were raised on the best of books. We grew up on books and this is part of our heritage.”

And he deflects any blame cast on technology for damages done to the book business. “Don’t blame me,” he said. For that, “you should talk to a guy named Jeff in Seattle.”