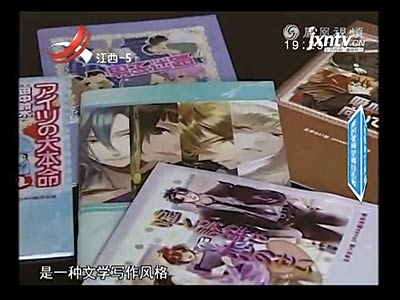 Copies of Japanese boys’ love novels seized during the raid in Henan Province.

China’s crack down “slash fiction” and pornographic graphic novels hasn’t stifled the flow of material — or its popularity.

What’s interesting about this is that the writers in question were mostly young women in their 20s, and they were all writers of the gay fiction known as “dan mei,” a genre which has earned a “vast and dedicated following” throughout China, a country where homosexuality is still very much condemned and kept in the shadows.

Dan mei is considered a form of “slash fiction,” a genre that, when it first appeared in the United States in the 1970s, “paired male characters from popular TV shows like Star Trek in unauthorized gay romances.” It showed up in China in the 1990s as a form of the Japanese manga known as “boy’s love,” but, as Yuan writes, “Focusing on male-to-male romance, dan mei (which may be literally translated as ‘indulgence in beauty’) has surprisingly spawned an exclusive fan base: Its readers and writers are nearly all straight young women and girls.”

And somewhat curiously, both the readers and writers of dan mei see the genre as different and separate from mainstream gay fiction.

The article quotes 25-year old Zhang Lu, who has been a fan of the genre since she was just 18 years old. “Dan mei depicts the perfection of romance between beautiful young men. It’s all about conveying the aesthetic appeal of its male characters through the writing,” adding that the reasons for its success is that it’s a “woman’s romanticized fantasy of men,” rather than “a man’s view of homosexuality.”

And, perhaps surprisingly, there’s a strong element of sexism involved in the writing. The Advocate cites one male author of dan mei who asked to remain nameless. “The dan mei circle,” he said, does not think that male authors are good at writing it, explaining that writers and fans seem to “believe that it requires a complete detachment from reality and the male view of sex and homosexuality.”

A former female writer of dan mei agreed, telling The Advocate that “Dan mei is a girl’s fantasy of gorgeous guys, often with feminine traits. It’s very naive in its depiction and does not feign realism.”

Yuan Ren notes that “with the influx of Western TV and film into China,” Benedict Cumberbatch as Sherlock Holmes has gained something of cult status among dan mei circles, “spawning countless depictions of gay romance between Sherlock Holmes and Dr. Watson.” (A sample passage, cited by The Advocate, translated from the original Mandarin: “With three strokes [Sherlock] clawed opened John’s shirt, lowering his head to kiss his Adam’s apple, and then worked all the way down: the clavicle, nipples, navel. He deftly untied his belt, taking out John’s…)

(Along with Sherlock Holmes, characters from other British dramas such as Downton Abbey and Dr. Who have been “dan meized” as well, leading fans of the genre to nickname the U.K. the “Gay Kingdom.”)

But looking beyond the books and websites such as Jinjiang Literature City, there seems to be some indication that dan mei is having a positive influence on public attitudes towards gays in China, at least among its female followers. “Dan mei and homosexuality are completely separate ideas,” Lu said (wrap your head around that one), “but people who read dan mei will be literal-minded towards the gay community.”