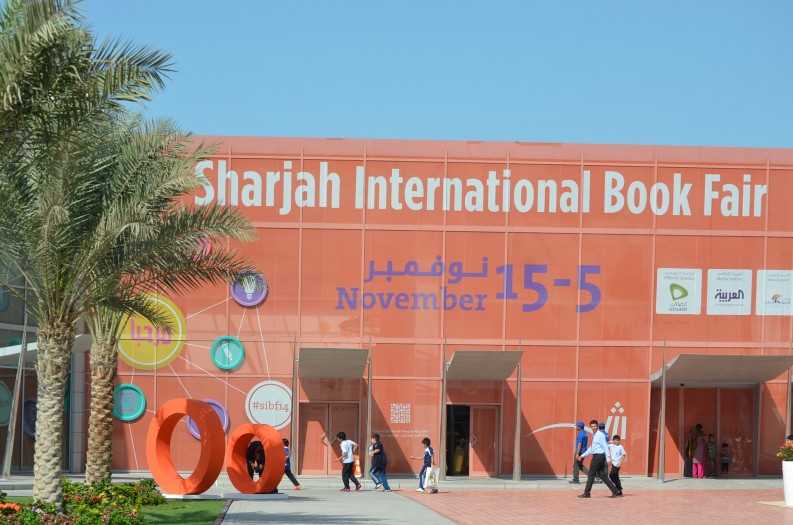 SHARJAH, UAE: The role of books in fighting Muslim extremism was a theme of the address given by His Highness Dr Sheikh Sultan Bin Mohammad Al Qasimi, the Ruler of Sharjah, at the opening of the 33rd Sharjah International Book Fair (SIBF) which continues through November 15.

In a poetic speech framed as a dialogue with his own heart – a heart that is appalled by some of the barbarous acts happening elsewhere in the Muslim world – he asked: “These disgraceful, destructive, devastating acts — is this the teaching of our tolerant vision? Push me my heart to light a candle to show the way in this dark world, to dispel these dark clouds so that the light of truth and virtue may shine through books.”

This was followed by the glitzy SIBF awards ceremony at which Taschen was named Best International Publisher, with PR Manager Best collecting the Koran statue trophy, and David Baldacci’s The Finisher was named Best International Fiction. Baldacci wasn’t there himself, but the SIBF did serve up Dan Brown this year who met his publishers in the region – Arab Scientific Publishers – and gave a talk on his fascination with symbols and codes.

“The ruling family is so generous with respect to intellectual development here,” he said. “What they’ve done so quickly to promote reading and learning and history and culture is pretty inspirational.”

New countries exhibiting this year include Austria, Belgium, Denmark, Finland and Poland. Attendance at the professional program was up 40%, with an extra hall required for the matchmaking sessions between publishers at the Chamber of Commerce, and an overspill area to accommodate the extra numbers. Within minutes of this famous rights bazaar opening, Sharjah first-timer Ua Matthiasdottir, Rights Director at Forgalid in Iceland, had sold a novel by the former Mayor of Reykjavik Jon Gnarr to Al Araby Publishing in Cairo, precisely the sort of East-West link-up this fair is all about. “It’s wonderful to come here and meet all these people,” she said. “It’s a unique opportunity to meet new publishers and engage with people who might not come to other fairs.”

Giuseppe Trapani of OUP UK sold 15 children’s titles to Arabic publishers “who don’t go to Bologna. The translation grant that Sharjah offers makes a big difference – it means the publishers are prepared to take the risk.”

SIBF newcomer, agent Denise Shannon who runs her own literary agency in New York, started encouraging discussions with a Lebanese publisher concerning a novel by Reif Larsen, author of the novel The Selected Works of TS Spivet (filmed as The Young and Prodigious Spivet). “I’m seeing people here who either don’t go to the other fairs, or who I am not able to see because I’m too tied-up with other publishers,” she said. “So it’s very useful.” Speakers this year included Richard Charkin, Bloomsbury UK Executive Director and President of the International Publishers Association (IPA), who wasted no time in alluding to a familiar concern. “Many fear the monopolization of distribution channels,” he said, in an overview of global publishing that did not mention Amazon by name but left no one in any doubt to whom he was referring. “The last thing we want is a single distribution channel. We want companies, not a company. And we have companies involved in our industry today who are not interested in our industry…”

He also touched on one of his favorite subjects – copyright. “Author copyright is sacrosanct, and it is the job of the IPA to protect that. Unfortunately, many people think it should be diluted to suit the digital world – and these threats come from governments, tech companies, even ourselves.

“Then there’s territorial copyright. More and more people want to buy books wherever they live now, and often they are able to do this. But we’ve split the world up into territories and I think that may be outmoded. I think we will see a move towards more global publishing.”

Amir Muhammed, founder of the publisher Buku Fixi (from the Malayan word for fiction, ‘fikysen’, see PP’s earlier profile of them), proved a popular speaker at the session on translation. Apologising to Charkin, he said that he found it exciting when he saw pirated copies of Harry Potter “and that was what made me want to explore translated books.” He began with Stephen King’s Joyland for which he held an open audition on Facebook to find a translator. “The first line of the novel is ‘It was the fall of 1973’ and we took out all those people who said ‘It was the year 1973 when a lot of people fell over…’.”

This year Fixi will publish four novels in translation, three from English and a Murakami from the Japanese. “But I’m here to buy contemporary Arab novels,” he said at the matchmaking session. “I’m here with my checkbook, meagre as it is.” Subscription models came up – as they frequently do now – with agent Lisa Gallagher of Sanford Greenburger noting that they vary widely. “Some seem great for writers, very focused on backlist, but my concern is what happens when one or two services drop away and one becomes very successful – that company will then push harder for better terms and I worry about what might be coming.” It was back to Charkin’s multiplicity of channels point again.

Among those out walking the floor this year was Rick Simonson of Elliott Bay Book Company in Seattle – possibly the first US bookseller to visit the SIBF – and Alastair Campbell, former Director of Communications and Strategy for UK Prime Minister Tony Blair between 1997 and 2003. Now a broadcaster and sometime novelist, he was making his first visit to the fair following a personal invitation from the Crown Prince. “I advise the Sharjah media center, but had never been to the fair before. It’s fabulous.”

John Ingram, Chairman of the physical and digital content distributor, Ingram, was interviewed by former Random House UK International Sales Director Simon Littlewood. He said that the UAE represented a potential emerging market for the company. “This is my first time here, and I’m certain I will be back. I think the UAE, the hub that it is, means this will be the first of many trips. I think the investment they are putting into education here means there are tons of opportunities.”

There were one or two minor grumbles from western publishers about ‘no shows’ from their Arab counterparts, and it jarred with some that the guest of honor Dan Brown, though seated on the top table with His Highness, was not formally welcomed from the stage. But these are quibbles. Essentially, everyone knows that this is a fair with its heart in the right place, backed by a Ruler who places books and learning at the very center of the emirate that he runs.